The Laguna Lake's fitness course is a great way to keep that New Year's resolution!

It’s Friday night, Jan. 9, and my friend Kristen texts me: “I hope you are resting up!”

Man, am I dumb! For the Health and Fitness issue, I had the swell idea to do the Laguna Lake Fitness Course, so I tapped the fittest person I know, Kristen Meisenheimer, Cal Poly chemistry assistant professor (aka Kristen Black, rock goddess), and we’re meeting tomorrow at 10 a.m.

Well, now it’s tomorrow and my wife, Anna, and I meet Kristen for our workout. Kristen’s 49 years old and works out six times a week for an hour each time. That’s just wrong!

“My dad was a cross country and track coach,” she explains. “I run three or four days a week and swim two or three. I used to do triathlons, but I took up surfing, which is the hardest thing to do, but we do it as a family.”

Kristen and her husband have two young men who graduated high school last year. The three guys keep her on her toes!

We find the start of the 10-station course and warm up with some stretches, per the sign’s instruction.

“I’m not really a gym person,” Kristen says. “I like to be outside.”

I’m the same way. Who needs the humiliation of a gym full of fit people laughing under their breath at my wheezing, right?

Some of the stations are easy, like the step-up, but if you’re fit, you can make it harder by doing more reps on the higher step. I’m cool with the low step. Experts say, “Take it slow when beginning a new workout. Nothing will make you quit faster than overdoing it!” 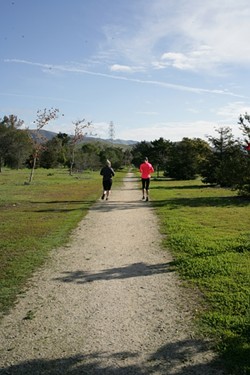 Other stations are harder, like leg lifts and sit-ups (those get old fast!). Some are really hard, like the push-ups, and others impossible, like the chin-ups. Maybe 40 pounds ago!

Soon we’re at the last station, winding down. I could see doing this again, increasing my effort little by little, maybe not carbo-loading as many beers the night before.

We’re close to the children’s playground, so I suggest we go swing for a while. That’s the sort of “exercise” I can really get behind!