Amid stacked boxes of old 78s--some of which are so obscure or rare that they haven't yet been copied to a digital format--sits Jim Kampschroer (pronounced camp-shore). From his library of more than 12,000 songs, he's coordinating music with commercials, public service announcements, and news in preparation for the next day's broadcast. 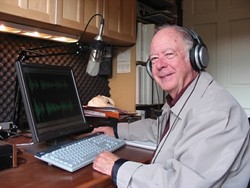 # Like his albums, Kampschroer--Papa Jim, to his listeners--may be the last of his kind. At 70, his retirement dream of running a radio station has proved to be more work than he bargained for. But his role as the operator of Cambria's community radio station, 103.5 FM KTEA, is significant as a community asset and a reminder of an era gone by.

Since the mid '90s, when the Federal Communications Commission did away with ownership limitations, radio just ain't what it used to be. Small-town radio stations have been gobbled up by corporate mega-broadcasters, and in their wake local DJs and local programming have all but vanished. Trends toward syndication and broader programming formats have proliferated to the point that only one commercial independent FM station remains in SLO County.

KTEA is "Old Time Radio," playing a mix of ragtime, Big Band, country, and jazz--anything from the '20s through 1965. There's a regular play list of 5,000 songs. As Papa Jim pointed out, it's the music he grew up listening to--and, admittedly, it's for a specific audience: the 50-and-older crowd that dominates Cambria and the North Coast area.

In truth, San Luis Obispo has at least three local radio stations that focus on local issues with local DJs. Both KCBX and KCPR have unique programming (see a KCPR commentary on page 20), but both operate on a not-for-profit basis. They hold fundraisers and receive funding from philanthropic groups or organizations that allow them more freedom in programming.

But the situation isn't totally dire. Beyond the handful of strictly or primarily local broadcasters, even this area's corporate-owned stations continue to draw from Central Coast roots.

"San Luis Obispo is lucky," Kampschroer said, "in that even though the stations are corporate-owned, many of them are produced locally--which is unusual."

American General Media, whose holdings include about 40 stations--four local--features live DJs and locally produced programming. That's something of a rarity among corporate ownership, which generally finds syndicated programs to be cheaper and easier to digest and sell as a brand. Still, AGM adheres to a loose formula, which includes a play list of 400 to 600 songs made up mostly of established hits with a rotating catalog of 30 or 40 more current hits. What's known as a "gold" format is slightly more expansive.

"Our owners are in Bakersfield," said Pepper Daniels, AGM's director of programming for SLO. "But they don't dictate everything we play."

Back in Cambria, Kampschroer has been on air for four years now, but the road to getting his own station began almost 15 years ago--and he noted that it would be impossible to travel now.

In 1994, he petitioned the FCC to open a new frequency in Cambria, and the agency did so in the public interest. Kampschroer beat out half a dozen hopeful owners in a bidding war for the frequency, and then had to navigate what he called "unbelievable bureaucracy." Finally, in late 2003, Kampschroer delivered his first broadcast.

Now, he says, when a frequency opens up, the FCC will hold an auction, often selling off several frequencies at a time in one package. The price is almost certainly too high for a hobbyist or even small-time DJ like Kampschroer. He estimates that a small station like his would fetch about $1 million if it were to be sold at an auction.

A fear of big business taking over Cambria's community station has already prompted some residents to make offers to buy it, although Kampschroer doesn't seem ready to sell.

The problem with big radio, Kampschroer said, is that "it drops all localism. They do what they have to, but the big corporations are only interested in preserving revenue."

Kampschroer has a handful of local sponsors who basically pay the station's bills, and his DJs are all volunteers, so there's not much pressure to produce anything but quality programming. Still, his precarious financial situation has raised questions about the viability of local radio. The benefit, however, is a true community forum.

In many ways, Kampschroer treats his radio station as a public creature. It serves the community, and also draws energy from local participation. Music from local artists--which he says Cambria is ripe with--is mixed into the play list. He also broadcasts local news several times a day, as well as interviews with local officials.

This season, KTEA started live play-by-play broadcasts of Coast Union High School's football games. Every Friday night, even for away games, listeners can tune in to hear the hometown heroes score a touchdown. Kampschroer said there's been a lot of positive feedback for the broadcasts, but it's still difficult to know who's really listening.

In an effort to put a more precise number on the table, Kampschroer pulled a calculator from the drawer of his dark-stained wood desk, and commenced with mumbling and entering numbers.

"About 43,000 listeners, according to the ratings," he said after his data crunching. "But that's all magical, I don't know how much truth there is to that."