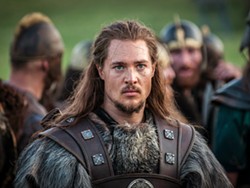 Beginning in 866 A.D. and covering more than four decades through the fourth season, the series follows Uhtred of Bebbanburg (Alexander Dreymon), a Saxon noble captured by the Danes as a child and raised first as a slave and then as a son. He becomes a man with a foot in each of these competing factions that wish to control what is now England.

Based on Bernard Cornwell's series of novels, The Saxon Stories, England is divided into seven kingdoms when the tale begins. But the invading Viking Danes want to rule it all, so they sack York and make their way toward other Saxon strongholds, eventually cornering King Alfred (David Dawson), who becomes England's remaining hope of not being overrun by the Danes.

If you're a fan of medieval history mixing fictional characters with historical fact, and sword-and-sandal epics, you'll most likely enjoy this well acted, written, and filmed series. I'm just about through season one and will most definitely keep going! Δ