The Legend of Livermore Valley 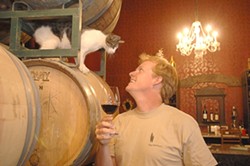 “I had been doing radio interviews with winemakers up there for KCBX,” he said. “I thought, I’ll buy a couple books on the area from Amazon. I went online, and there were zero. So it was obvious that there was a big hole there.”

Wilmer took it upon himself to pen the first book on an area that had been quietly producing world-class wines for 125 years. The treasures he unearthed fill the book The Wine-Seeker’s Guide to Livermore Valley, which was praised by the likes of Sunset Magazine, La Repubblica in Italy, and The Mail on Sunday in London.

The guide profiles some of the top wineries in the area. Illustrated by beautiful color photos, every section is just long enough to overview the facts, dip into the winery’s history, and give the reader a flair for the unique flavor of each place. 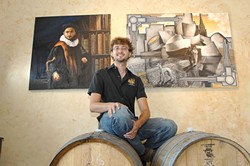 Written in Wilmer’s engaging style, the book is worth a read just for the nuggets of little-known information it provides. The Marissou family, for example, is one of the most noteworthy in California winemaking history, but did you know that fifth generation vintner Steven Marissou operates two wineries in Livermore Valley? He’s not allowed to use his family’s famous last name—it was bought by Gallo Corporation in 2003—but the outstanding quality of the wines is the same.

Despite national and international press, The Wine-Seeker’s Guide, like the region it profiles, remains relatively unknown here in California. Wilmer, who lives in Los Osos, attributes this to local prejudice toward Livermore Valley, which the author knows to be one of California’s premier wine-producing regions, on par with Napa and Sonoma.

“Some distributors went, ‘Oh, Livermore? We’re not that interested; it’s just Livermore,’” Wilmer recalled. “And that’s the whole point of the book: proving it’s not just Livermore. So they still suffer from that uninformed perception.”

Perhaps it’s the region’s unglamorous name, the author speculated. He has a point there. But Liverpool’s famous exports succeeded despite the town’s icky moniker. Maybe there’s hope for Livermore Valley, too.

The Wine-Seeker’s Guide to Livermore Valley can be ordered from Barnes and Noble, Borders, and Amazon.com.