The Liar brings poetry and laughter to Morro Bay

By The Sea Productions' The Liar will show through July 28. Tickets range from $15 to $20. Visit bytheseaproductions.org for tickets and more information.

What really constitutes a lie?

Like a game of telephone, the truth gets a little blurrier each go-round in the farcical play The Liar, which playwright David Ives (Words, Words, Words) modernized in 2010 from Pierre Corneille's (Le Cid) adaptation in 1644, taken from from Juan Ruiz de Alarcón's (La Verdad Sospechosa) 1634 version.

Makes your head spin a bit, doesn't it? 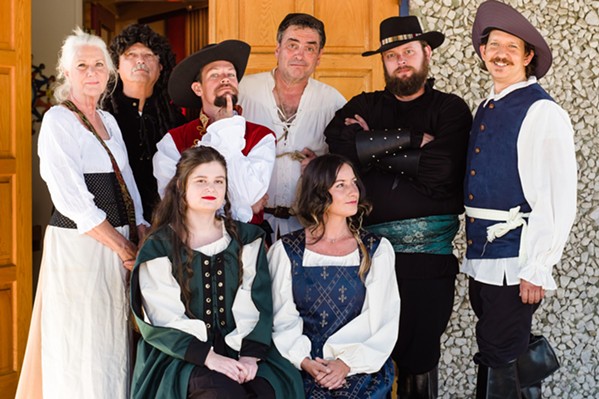 Well, have no fear, as the play has only gotten funnier over time. The show—which feels a bit like Monty Python meets The Importance of Being Earnest meets Much Ado About Nothing—made its By the Sea Productions debut July 5 at St. Peter's By The Sea Episcopal Church in Morro Bay.

Set in Paris in the 1600s, the comedy focuses on Dorante (Nicholas Coffey, Cuesta College's Man of La Mancha), the quasi-villain of the play, who, to put it simply, is a compulsive liar. On his first day in town, he meets Cliton (Ed Cardoza, Wine Country Theatre's Moonlight and Magnolias), a man looking for work who is physically incapable of telling anything but the truth. Shenanigans ensue in short order when Dorante runs into friends Clarice (Bailey Satterfield) and Lucrece (Deiredre Loy), promptly falls in love with one, but confuses their names. You see where this is going.

Add in a father desperate for Dorante to wed; a jealous fiancé of Clarice, Alcippe, who happens to be a childhood friend of Dorante; identical twin servants; and a long-lost son, and things get real Shakespearean real fast.

Oh, and all the lines are written in pentameter, aka poetic verse.

It's all good fun and nonsense, with an extra heaping of "she said, he said" thrown in for good measure. Coffey and Chris Blicha, who plays Alcippe's friend, Philliste, are excellent foils for one another, and Travis Horton (Silent Sky) as the jealous Alcippe takes things up a notch.

Here's a lie and a truth for you, dear reader, do with them what you will: In the world of The Liar, Violet rhymes with toilet, and this is definitely not a play that will make you laugh out loud. Δ

Arts Writer Ryah Cooley is crossing her fingers and toes. Contact her at rcooley@newtimesslo.com.