The little anomaly that could

How a mysterious, pixilated discovery got the attention of planetary geologists, conspiracy theorists, and British tabloids

David Martines still isn’t sure what he found on Mars last May. It caught his attention because it was white and angular, a contrast to the rest of the planet’s dusty, rust-colored surface. A San Luis Obispo native who works in real estate, Martines often used Google Earth for work, but one evening, he wandered off the grid to the program’s Mars Explorer. The white, cylindrical anomaly happened to have been the first thing he zoomed in on. Based on Google’s latitude and longitude measurements, Martines estimated the thing to be about 700 feet long and 150 feet wide. The more he looked at the anomaly—located at 71 49’19.73”N 29 33’06.53”W—the more he knew what it resembled.

“I didn’t see anything else like it, and the more I thought about it, it just looked like a space station,” Martines said. “I actually took a few still shots of it and sent it to NASA, and said, ‘Hey, what’s this?’ Thinking that they’re going to get back to me!”

Curious to know what others thought of the anomaly, Martines decided to make a short video to post to his YouTube channel (YouTube.com/TheCalifornian). It’s just a modest 2 1/2-minute clip of Martines’ computer screen, as he slowly zooms on the white speck, narrating with his calm, even voice.

“I’m calling it Bio Station Alpha, because I’m assuming someone is living in it, or has lived in it,” Martines says in the clip. At the end, he invites viewers to share their thoughts.

It was a spaceship, a satellite, a rock, a clump of ice, a government conspiracy. The clip quickly went viral. Sci-fi bloggers, annoyed skeptics, and conspiracy theorists weighed in. Within days, the British tabloid The Sun had broken the story of the “Google geek” and “armchair astronaut” who had discovered a possible space station on the red planet. (Wheelchair astronaut would have been more accurate, though it would have broken the alliterative pattern.) Not to be outdone, Britain’s Daily Mail picked up the story as well. At the time, the clip had pulled in 200,000 views.

Then, the story made it back over to the United States. For comment, MSNBC’s “Life’s Little Mysteries” turned to Alfred McEwen, a planetary geologist at the University of Arizona’s Lunar and Planetary Lab, director of the Planetary Imaging Research Laboratory, and principal investigator of the High Resolution Imaging Science Experiment (HiRISE), a powerful telescope in orbit around Mars.

McEwen explained the anomaly was a glitch in the image caused by the interference of cosmic energy with the satellite camera.

“With space images that are taken outside our magnetosphere, such as those taken by orbiting telescopes, it’s very common to see these cosmic ray hits,” McEwen told MSNBC. “You see them on optical images and a lot of the infrared images, too.”

Despite (or because of) this, the video’s hits ticked away. On Fox, Dr. Michio Kaku—theoretical physicist, author, and physics professor at the City University of New York—was called upon to explain the fuzzy white shape.

“Every scientist’s dream is to find a spaceship on Mars,” Kaku conceded. “However, the truth is more mundane.”

His thoughts echoed those of McEwen’s: “Probably it’s a cosmic ray track that went through the camera, and digital software then magnified the pixels that are aligned in a streak.”

Right around this time, Martines said, as the number of hits passed 2 million, the number of embeds at approximately 85,000, something highly unfortunate occurred: He deleted the video.

It happened at around 2 a.m. Martines was tinkering with his YouTube account and accidentally removed the clip.

“Isn’t that funny?” he remembers thinking. “I was actually pretty distraught over that. I don’t care now.”

Though he immediately reposted it, the video disappeared permanently from the 85,000 places it had been embedded, leading to a YouTube conspiracy storm of another sort, he said. 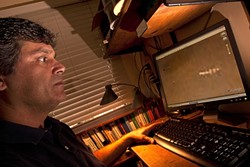 Martines’s Internet following raged. YouTube had censored the video. Shame! No, NASA had shut down the video to cover its tracks! No, it was the United States government!

“I was doing my disaster recovery efforts,” Martines said. “They said the government took it down and all of
this. I needed to contact a few people and set them straight and say, ‘No, I screwed up.’”

By July, the media buzz had largely fizzled. But on the Internet, the thing is still news. People continue to discover it and postulate their own theories and opinions, some eloquently, some in outraged capital letters.

“I think it’s more likely to be a research base or something NASA built and just didn’t list on the ol’ government receipts,” writes one steadfast believer.

“I don’t blame you for being excited about finding something that clearly looks artificial, but on the other hand, your eagerness to label it as an intelligent construction is more than a bit childish,” sniffs a skeptic.

The re-posted clip still averages 500 new views per day. Though Martines admitted he’s rather tired of it by now, his growing viewership won’t let the possibility of a space station on Mars die.

“It’s kind of out of control for me. I don’t pay that much attention to it,” he shrugs. “I go in and I read the comments and stuff, but I’m not really that into it. It’s been taken over, pretty much.”

Martines’ clip urged the curious to scope out the anomaly’s coordinates for themselves. But in a funny new development, recent visits back to 71 49’19.73”N 29 33’06.53”W have turned up nothing but red dirt. The infamous Bio Station is gone.

“Maybe it flew it away,” he said, looking unconvinced—or maybe just over it.