It took me years to get to the Live Oak Music Festival. Every year I got the press materials and dutifully wrote something about it, but it always felt a little too hippie for me, a little too far away, a little too out of my comfort zone, so I never went … until five years ago. When the weekend was over, I thought, “What was I waiting for?” Now it’s become a not-to-miss annual event, and on Father’s Day weekend—Friday, June 17, through Sunday, June 19—I’ll be there again! 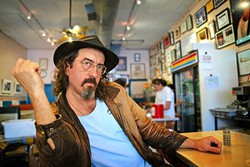 It’s just an amazing mix of music, community, and relaxation. Unlike some music festivals, Live Oak is very family friendly, with a large area dedicated to kids activities, everything from crafts to storytelling to music workshops and more. If your kids are too old to be corralled, they’ll be perfectly safe wandering the expansive campground, where it’s not uncommon to see roving groups of kids shooting it out with water pistols or riding their bikes.

Live Oak Camp is off Highway 154, about 80 minutes south of SLO Town. The dusty campground transforms into a little hamlet with three music stages, fantastic campsites, RV parking, delicious food vendors, and fun activities for the whole family. If you plan on camping, now’s the time to buy tickets and make your arrangements at liveoakfest.org. If camping isn’t your thing, day passes are also available, or if you want to stay the weekend but sleep in comfort, Santa Barbara’s many hotels are just 20 minutes away.

This year’s lineup is eclectic as always. Friday opens with The Drive-In Romeos, a stylish roots, rock, and R&B band at 4 p.m. The Dustbowl Revival follows at 5:30 p.m. with their pre-war blues, swing, hot jazz, Southern soul, and bluegrass sounds. At 7 p.m., the Mike + Ruthy Band brings their Americana sounds followed by Friday’s headliner The Jay Farrar Trio. The former co-frontman of Uncle Tupelo and founder of Son Volt will perform songs from Son Volt’s seminal 1995 debut Trace. Look for an interview with Jay in next week’s column.

Come Sunday at 10 a.m., get ready for some gorgeous and heartbreaking songs by Jade Jackson, a terrific singer-songwriter from Santa Margarita who keeps getting better and better, especially after her attendance at Cal Arts. Sean Rowe brings his poignant acoustic blues to the stage at 11:30 a.m. The incendiary and inventive Latin sounds of Candelaria will fill the afternoon starting at 3:45 p.m. Singer-songwriter Sarah Jarosz brings her emotionally resonant songs to the stage at 5 p.m., and this year’s Sunday night headliner is none other that Wynonna & the Big Noise, Wynonna Judd’s killer new band.

In between are more acts on Stage Too such as Phil Salazar, The Kicks, The Olés, the Kenny Taylor Band, and the Shawn Clark Family Band. On the Hot Licks Stage you’ll hear the Maya Burns Band, the Rainbow Girls, The Bucket Busters, Joe Koenig, Kalinka, and the Kids Talent Show with Don Norton. This year will also feature unicycle preformers like Something Ridiculous in the Beer Garden. 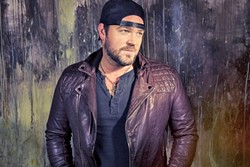 One moment you’re working behind the scenes, writing hit songs for folks like Kenny Chesney, Tim McGraw, and Garth Brooks, the next you’re on stage with your own hit singles like “Upper Middle Class White Trash,” “A Woman Like You,” “Love Like Crazy,” “Hard to Love,” “I Drive Your Truck,” “Parking Lot Party,” “I Don’t Dance,” and “Drinking Class.”

Such is the life for Lee Brice, who was born in South Carolina and grew up playing piano and guitar, singing in church, and eventually attending Clemson University on a football scholarship.

“I had success as a writer before I had success as an artist,” Brice said in press materials, “so there’s a misconception that I was a songwriter first and then started to sing my own songs later. But all along, I’ve really always been writing for myself. When I started writing songs at 10 years old, it was because I wanted to sing them, and when I came to Nashville, I came to be a songwriter and a singer. It’s all one thing to me.”

Numbskull and Good Medicine Presents has a must-see double bill at Tap It Brewing Co. this Monday, June 6. If you dig ska and reggae, you’ve got to see The Skints and The Expanders (7 p.m.; all ages; $13 presale at ticketfly.com or $15 at the door). 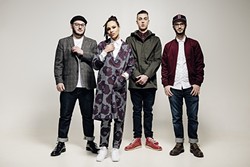 London-based The Skints mix reggae, ska, dub, punk, dancehall, soul, grime, and hip-hop into a sound that Clash Music describes as “the torchbearers for modern British reggae music.” They’re every bit as fun as The English Beat, The Selecter, or Madness.

The Expanders play ’70s-style reggae with three-part harmony vocals. If you dig the Ethiopians, Gladiators, Mighty Diamonds, Culture, Sound Dimension, Aggrovators, or Roots Radics, they’ll be right in your wheelhouse. 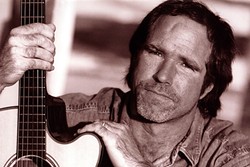 “I’m a glorious peasant, I’m a passionate fool, I’m a hard-workin’ brown dirt poet, ain’t never finished school,” Award-winning singer-songwriter Keith Greeninger sings on “Glorious Peasant.” The incredible performer will play an acoustic “Back Porch” concert as a fundraiser for the Infinite Music Foundation this Saturday, June 4, at Bang the Drum Brewery (6 p.m.; all ages; $15 presale at the venue, Boo Boo Records, or online at infinitemusicfoundation.org; or $18 at the door).

IMF is an all-volunteer nonprofit dedicated to making music for kids a priority. Attendees will enjoy a casual evening of great music and good taste with Bang the Drum’s craft beer, Woodstock’s pizza, and Castoro Cellars award-winning wines.

Should be a great event for a great cause! 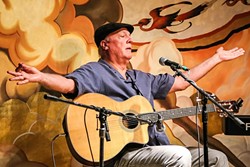 Coalesce Bookstore and the Central Coast Guitar Society present James Bishop-Edwards in concert this Friday, June 3 (7 p.m.; all ages; $20 at 772-2880), in a concert called Guitar in the Age of Schubert: Solos and Songs on Romantic Vienna, with soprano Katherine Arthur. Bishop-Edwards plays historical instruments of the Renaissance and Baroque periods such as the five-course guitar and eight-course lute.

This Friday, June 3, baritone Jim Conroy brings his big voice to the Songwriters at Play showcase at Santa Margarita’s The Porch (7 p.m.; all ages; free). A veteran of regional theater and frontman for The Mystery Brothers, he’s got a ton of talent and material to present. Other performers include John Nowel (of the Jody Mulgrew Band), Buellton’s Randall Lamb, and KCBX radio host Little Rob Kimball.

Last Stage West hosts Thunderegg this Saturday, June 4, along with Santa Cruz band Pieces opening (6 p.m.; all ages; call 461-1393 for dinner reservations). “We don’t get down to SLO County as much as we’d like to, so this will be a relatively rare Egg sighting,” Thunderegg noted. “We’re all originals, two guitars, bass, and drums. Thunderegg has been around for 20 years now, in various locations, with various lineups, playing in various places (even a tour of Germany in 2013), but the current SF/Oakland version, about three years old, is really firing on all cylinders right now. It’s going to be a really fun night!”

The Cal Poly Symphony and Choirs presents Fauré’s “Requiem” and a preview of the orchestra’s repertoire for its upcoming Central Europe tour on Saturday, June 4, in Harman Hall in the Performing Arts Center’s Christopher Cohan Center (8 p.m.; all ages; $12 and $14 general admission, $9 and $12 for students; 756-4849). Hear Aaron Copland’s “Variations on a Shaker Melody,” Antonín Dvorák’s “Slavonic Dance in G Minor,” Op. 46, No. 8, Johann Strauss’ waltz “Wiener Blut,” and Béla Bartók’s “Hungarian Pictures,” among other works.

If you like the film Pitch Perfect as much as I do, check out Cal Poly’s a cappella ensemble Take it SLO when they perform their annual Spring Concert on Sunday, June 5, in Room 218 in the Davidson Music Center (Building 45) on campus (1 and 7 p.m.; all ages; $7 general admission or $5 for students at the door). The 15-member vocal ensemble will perform a variety of songs, including new works, all arranged by students.

LA-based singer-songwriter Hart Bothwell blends punk aesthetics, acoustic guitar, and electronic drums to create narrative rock sounds, and this week he’ll play two local shows as part of his U.S. and Canadian tour to promote his third album Another Circle, at Frog and Peach on Wednesday, June 8 (6:30; 21-and-older; free), and at Shell Café on Thursday, June 9 (6:30 p.m.; all ages; free), during a Songwriters at Play showcase.