Lots of shows at this weekend’s Live Oak Music Festival have me giddy with anticipation. I can’t wait to see The Record Company live. It’s a band Time Out LA described as John Lee Hooker and The Stooges’ love child. Then there’s R&B shouter and roots rocker Nikki Hill, a southern dynamo I interviewed a couple weeks ago. I also can’t wait to see the Easy Star All Stars, whose Dub Side of the Moon show pays reggae-style homage to Pink Floyd’s Dark Side of the Moon album. And that only covers a few of the shows on the first day, Friday, June 19.

On Saturday, June 20, I’ll be soaking in the elegant and haunting sounds of Shadowlands, whose new album continues to offer surprises every time I listen to it. One of the great things about this festival is it always introduces me to new music, like Riyaaz Qawwali, an eight-piece ensemble made up of musicians from India, Pakistan, Afghanistan, and Bangladesh. Jungle Fire and its Afro-Latin funk is going to put the ’70s right into my dance feet. Plus there’s blues from Lil’ Ed and the Blues Imperials whose live show just kills! But I’m especially looking forward to “Treme Prince” Glen David Andrews and his phat New Orleans second-line sounds. His music has as big of a personality as he does, which I discovered during my interview with him last week.

I wanted to interview Steve Earle for this issue, but the country and rock iconoclast has been at this too long to bother with a small town music journalist. I don’t blame him a bit. The man’s music and career tells you everything you need to know about this outlaw performer.

Raised in Texas, he left home at 16 and met his hero and mentor Townes Van Zandt. At 19, he met and married the first of his six wives (he’s been married seven times because he married one twice). He then took off for Nashville and met Guy Clark and Rodney Crowell; started writing songs for Johnny Lee and Patty Loveless; made his own way in 1986 with his first album, Guitar Town; and opened for the likes of George Jones and The Replacements, proving he was equally accepted in the country and rock worlds. After that, he almost destroyed his career with heroin addiction, did jail time and rehab, kept writing great music, threw his politics into his music, became a staunch opponent of capital punishment, won three Grammy Awards, and released 16 albums along the way. His most recent is Terraplane, featuring his band The Dukes.

Earle is a real heartland kind of songwriter in the vein of Waylon Jennings, Bruce Springsteen, and John Mellencamp. He’s written country classics and rock gems. This time around, the master storyteller is working all the blues angles on his new record, quoting Lightnin’ Hopkins in his liner notes and growling out dark moments of the soul.

“For my part, I’ve only ever believed two things about the blues: one, that they are very democratic, the commonest of human experience, perhaps the only thing that we all truly share; and two, that one day, when it was time, I would make this record,” wrote Earle in his liner notes. “And it’s time. Hell, everybody’s sick of all my fucking happy songs anyway.”

Steve Earle and The Dukes close out the festival on Sunday, June 21, but before then, I’ll also be treated to Joe Craven’s awesome new world music trio Mamajowali, the frenetic string band sounds of Hot Buttered Rum, and country singer extraordinaire Suzy Bogguss.

As of June 17, there were still some full weekend passes for the Live Oak Music Festival (available at liveoakfest.org), but even if they’re sold out by the time you go online, there will still be day passes available, and judging from this year’s talent, every day of the festival will be worth the trip. Live Oak Camp, just off Hwy 154, is about 15 minutes north of Santa Barbara and 80 minutes south of San Luis Obispo. This terrific, family-friendly event is a fundraiser for our local NPR affiliate, KCBX 90.1 FM.

My wife is working her way through The Walking Dead again, a series I enjoyed in the beginning, before it turned into a repetitive soap opera with zombies and gore. One character that was worth rooting for was Beth Greene. You see, some characters get eaten and some don’t, and some you care about (I’m talking about you, Hershel!) and some you don’t (Get eaten, Shane! You jerk!). 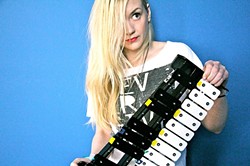 Somehow, Beth (Hershel’s daughter played by Emily Kinney) has managed to NOT GET EATEN! Maybe it’s because her music career has become part of the show. Several of her songs and performances made it onto the soundtrack, my favorite being her rendition of Tom Waits’ “Hold On,” which she sings in a haunting, lilting, tragic way.

Good Medicine also brings Johnny Cash tribute act Cash’d Out to SLO Brew on Friday, June 19 (7 p.m.; 21-and-older; $12 presale or $13 at the door), and on Sunday, June 21 they play host to House of Shem (7:30 p.m.; all ages; $10 presale or $12 at the door), an Aotearoa (New Zealand) based harmony trio comprised of Carl Perkins and his two sons Te Omeka Perkins and Isaiah Perkins, who are each multi-instrumentalists and producers. Expect roots reggae, Pacific reggae, and traditional Maori music.

Scratch, a band specializing in danceable rock ’n’ roll covers from the ’70s, plays at 10 p.m. this Thursday, June 18 at Frog and Peach. “We’ve been at it for about two years and are pretty good,” band member Jeff “Loose” Cannon said. 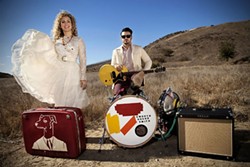 The Longshots play Frog and Peach at 10 p.m. this Friday, June 19, delivering vintage sounding rock steady and ska music inspired by the ’60s. “If a Hammond organ married a Gibson guitar, they would walk down the aisle to a steady drop beat made by The Longshots’ rhythm section,” the band’s bio said. “Their vocals are pure soul in two-part harmonies. Tinged by despair, The Longshots sing about what makes loves so hard and what makes life worth living.”

Castoro Cellars plays host to a Father’s Day Celebration this Sunday, June 21, from 1 to 4 p.m., with The Martin Paris Band. Paris is an amazing guitarist with a versatile repertoire of everything from classic rock covers to pop, folk, blues, ballads, and Celtic arrangements. This free show will be held on Castoro’s outdoor stage in front of the tasting room. Bring a picnic or purchase lunch from Higgie’s BBQ. Wine’s available for purchase by the glass or bottle. 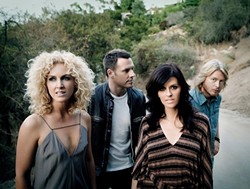 SLO House Concerts proudly presents Cajun Country Revival in concert on Monday, June 22 at 7 p.m. (email slohouseconcerts@gmail.com for reservations; $20). “And now, for something completely different—still American roots music, but this show moves away from our typical Irish/Celtic/old-timey music to Louisiana and the authentic heart of Cajun music. Joel Savoy and Jesse Lége are the real deal, both of them having won numerous awards from the Cajun French Music Association. Joel and Jesse, along with Nadine Landry and Sammy Lind of Foghorn Stringband, will be performing at the Long Beach Bayou Festival over Father’s Day weekend and then driving up to our house concert series. We are so very lucky to be hosting the four of them and we hope that you will join us for this amazingly special evening,” organizers said.
“Foot-stompin’ American roots duo” Smooth Hound Smith, featuring “One-Man-Band” Zack Smith (guitars/vocals/foot drums/harmonicas) and Caitlin Doyle (vocals/percussion), play Tuesday, June 23 at Linnaea’s Café (7 to 9 p.m.). They perform a “varied and unique style of folky, garage-infused rhythm & blues.”

The Central City Swing Band performs its annual Spring Concert in Orcutt’s Unity Chapel of Light Church on Tuesday, June 23, at 7:30 p.m. The concert will feature music arranged in a swing and modern jazz style, performed by a 17-piece big band with two vocalists. There’s no advanced tickets and no admission charge, but there’s a tip jar in the lobby and any donations are split equally with the church.

Country fans, get excited! Vina Robles Amphitheatre presents Little Big Town with special guests David Nail and Ashley Monroe this Tuesday, June 23 (tickets available at vinaroblesamphitheatre.com). Little Big Town’s tight four-part vocal harmonies have made them favorites since they formed in 1998. Should be a great night of music!

Internationally acclaimed Portuguese-Canadian artist Awna Teixeira plays Linnaea’s Café this Wednesday, June 24 at 8 p.m. The multi-instrumentalist played with The Derby and The Red Eyed Rounders before teaming up with the all-female country-folk band Barley Wik. Then she joined forces with Allison Russell and became the core of the highly esteemed and internationally recognized Canadian band, Po’ Girl. She’s now touring to promote her new album Wild One, her second solo album. These deeply emotional songs will get under your skin.

It’s time to once again submit your music to the New Times Music Awards, either online or by filling out the entry form on page 37 and bringing it to our office.

Entries are due Thursday, July 6 by 5 p.m. ($10 per song entry fee). Readers Choice voting runs from July 30 through Aug. 13. The awards and showcase happens Friday, Sept. 25 at the Fremont Theater, and musicians must be able to perform that evening to be eligible to win.