The living dead: Morro Creek Ranch is stumping its avocado trees, but they will rise again 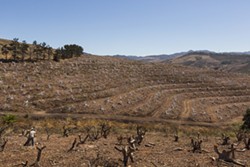 The hillsides of Morro Creek Ranch off Highway 41 in Morro Bay are normally shaded by the greenery of 225 acres of avocado orchards. But in severe drought conditions, those hillsides are, instead, increasingly dotted with white stumps. It’s a sight that General Manager Alan Cavaletto refers to as “the graveyard,” given the similarity of the stumped trees to rows of crucifixes in a cemetery, especially when seen from a distance.

“One of the partners said, ‘Put a cross on the hill, and it will fit right in,’” Cavaletto said.

Despite their appearance, however, the trees are very much alive.

Morro Creek Ranch started stumping its avocado trees—the vast majority of which are of the Hass variety—in April 2014, in response to a lack of rainfall and reduced groundwater.

Avocados do require a lot of water and are more temperamental than other crops, like citrus, during a drought, Cavaletto said. In a normal year, Morro Creek Ranch’s avocados require about 1 1/2 to 2 acre feet of groundwater per acre, and during the current drought they can require 2 to 4 acre feet per acre, he explained.

Cavaletto, who’s been general manager at Morro Creek Ranch since 2005 and worked in agriculture his entire life, said that the current drought is the worst he’s ever seen. 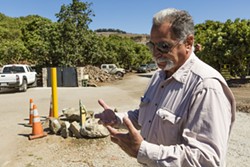 “This drought’s serious enough that it’s going to change California” he said.

Cavaletto expects to continue stumping trees through the end of August, impacting roughly 90 percent of the avocado trees on the ranch when all is said and done.

The process starts by removing most of the branches with a timber harvester for the larger trees or an excavator with a cutting attachment for the smaller trees. Imagine a small bulldozer bearing a mechanical arm with a rotary blade attached to it, capable of cutting through tree branches like a weed whacker slices through blades of grass, and you’ll start to get an idea of what these machines are like.

After the bulk of the growth has been removed, each tree is finished with a chainsaw so that only the trunk and a portion of the primary branches are left. The trees are then painted with a white, water-based paint to prevent sunburn, and must be pruned every few weeks or so to prevent overgrowth.

“If you let it go, it’s a jungle” Cavaletto said.

It takes three years until a stumped avocado tree will produce harvestable fruit, meaning Morro Creek Ranch won’t have a full harvest again until 2017. However, once the trees grow back, they’ll actually produce more fruit than an older tree that hasn’t been through the stumping process.

“The stumping reinvigorates and makes it a young buck,” Cavaletto said.

He explained that the stumped trees can survive without any water for roughly four to five months, and after that point will require less water than trees with greater biomass. Cavaletto’s plan is to buy Morro Creek Ranch some time until the rains return.

He estimates that Morro Creek Ranch will need to see about 18 to 20 inches of rain per year for the next four to five years and references the possibility of a “light El Niño” later this year.

The National Oceanic and Atmospheric Administration (NOAA) defines El Niño as “an oscillation of the ocean-atmosphere system in the tropical Pacific” that is “characterized by unusually warm ocean temperatures.” NOAA lists “increased rainfall across the southern tier of the U.S. and in Peru” as among the consequences of El Niño.

As of press time, NOAA’s National Weather Service reports a 65 percent chance of El Niño appearing in the fall and winter of 2014, and notes that a “weak event” is indicated by forecasters.

Despite the uncertainty—and the drastic measures Morro Creek Ranch is taking in response to the drought—Cavaletto remains optimistic. When asked if he’s hopeful that the situation will improve, he promptly replied, “Oh, you betcha. That’s the whole reason for doing this.”

Calendar Editor Trever Dias can be reached at tdias@newtimesslo.com.