The long shadow of the mouse

Even after all these years, veteran illustrator Frank Armitage finds it hard to let go of his decades of art training and start fresh.

“Sometimes it takes a while to shake the other influences off,” said the Australian-born artist, who started working at Disney Studios in 1952. “But what I’m doing now is, instead of painting what something looks like, I’m rather trying to paint what it feels like.” 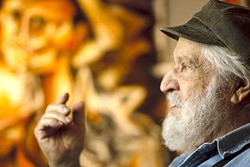 Armitage gestured toward a mural-sized painting of two tangling horses, which he’s been assembling bit by bit, attaching together pieces of paper like a sail. And upon reflection, the horses’ parts seemed deliberately disproportionate: too muscled, perhaps; too flexible to be real. But their snorting, rolling, horsy essence was as tangible as if they had been present in the shared Studios on the Park workspace where we sat.

After a career spent illustrating for a paycheck—painting things as they appeared, or as others thought they ought to appear—Armitage got, understandably, bored. Like fellow Disney alumnus Walt Peregoy, with whom the artist shares the current Paso Robles Art Association joint exhibit “Zip-a-Dee-Duo,” Armitage seems very much willing to leave the whole Disney thing in his past.

Both Armitage, who lives in Paso Robles, and Peregoy, based in Encino, once studied with Mexican muralists. This influence is clear in Armitage’s penchant for large-scale works. The slow, forced march of time has seen Armitage develop his relatively new style of breaking his paintings up into small, workable chunks and putting them together as one large piece, rather than having to move around one large canvas.

Armitage and Peregoy met at Disney Studios, where they worked in the same room, both beginning as minions and working their way up.

“I was way down at the bottom, doing in-between,” Armitage said, referring to the job of creating intermediate frames for animation, so that one drawing morphs smoothly into the next. “I did that for a couple of years. That was the tail end of Peter Pan and Lady and the Tramp. Then when Sleeping Beauty came up, I switched to background.”

Peregoy initially began working at Disney in 1942, but quit after just a few months, disliking the assembly-line environment of the place. But he returned to the studios almost a decade later, after studying under Fernand Leger in Paris. Alongside Armitage, he worked as a background painter for Sleeping Beauty and as a color stylist for 101 Dalmatians and The Jungle Book. In an interview with Animation Guild blogger Steve Hulett, posted in February of this year, Peregoy expressed disgust for Disney—both the man and the company—and claimed he was never credited for much of the work he did, when other animators were.

“The art world is predominately hypocrites,” he concluded.

For health reasons, Peregoy was unable to attend the “Zip-a-Dee-Duo” reception, or to speak to New Times over the phone.

After Sleeping Beauty, Armitage worked on projects like Mary Poppins and The Jungle Book, he said, appearing beleaguered by the topic: “Anyway, enough about that.”

Armitage’s interest in the workings of the human body would then lead him in the direction of anatomical drawings, and the results of his fascination are some of the most glorious crossovers of art and science. Working with the Swedish anatomical photographer Lennart Nelsson, Armitage illustrated the functions of the brain for LIFE Magazine in 1971.

He procured an image resembling a lush, alien forest.

“This is the circuitry of the cerebellum,” he explained, “and that’s all accurate. But as far as I’m concerned, it’s a painting.”

Armitage’s experience in medical renderings led to work as a production illustrator for the science fiction film Fantastic Voyage, in which a submarine is miniaturized and sent into the human body to break up a blood clot.

Such intimacy with the subject matter is a common thread throughout Armitage’s repertoire. While his murals and large-scale paintings engulfed the eye in their environments, his medical illustrations invited viewers into unseen parts of themselves—into their own heads, in the case of his LIFE illustrations.

The work the illustrator did to get Disneyworld Florida’s Wonders of Life exhibit underway was still another step toward swallowing the viewer in art and anatomy.

“I did paintings inside the nervous system and inside the blood vessels and stuff like that, so you felt like you were surrounded by this stuff,” he said. “And I honestly don’t know if I could have come up with that image if I hadn’t worked on a film lot, because at lunch time I’d go down to the sound stages and wander around. Especially if you’d get some weird sets like Darby O’Gill, out of scale and so forth, and I thought, damn, if I could paint anatomy to feel like this, like you’re in the center of it … then people will remember what the hell they’re looking at.”

Armitage and Peregoy’s independent efforts are certainly less known than their careers in animation, though their solo offerings are often fresher, more interesting, and less messed-with by art directors—a point of frustration for both of them.

A day or two after our interview, Armitage called, asking if I could try and hold off on the Disney angle.

“The work in this show,” he implored in his Aussie growl, “has nothing to do with the mouse.”

Arts Editor Anna Weltner writes of mice and men. Contact her at aweltner@newtimesslo.com.