The Lunch Lady Chronicles: A New Times staffer returns to middle school--this time on the other side of the lunch counter

It’s 7:15 a.m., and instead of lying comfortably in my bed, I’m standing in an industrial kitchen. Instead of putting my head on a pillow, I’m putting on an apron, plastic gloves, and a hairnet.

I’m just a few minutes into my stint as a lunch lady at San Luis Obispo’s Laguna Middle School, but I’ve already developed a deep appreciation for the commendable men and women who work at this ungodly hour.

Though I’m half-awake and still gulping down my coffee as I walk into the kitchen, things are already bustling. Workers far more dedicated and professional than I have already been churning out food for some time.

I’ve decided to work in Laguna’s kitchen for a day to answer a simple question: What’s the state of scholastic food service in 2014?

Seeking an early answer to my question, I ask Central Kitchen Supervisor Diane Basti for her take.

“If the kids get fed, I accomplished my job,” she says, chuckling. “That’s always the end goal.”

Basti is a no-nonsense manager who runs her kitchen with exacting attention—commanding the respect and devotion of her kitchen workers.

She’s also my boss for the day (May 29), and makes sure that I’m pulling my weight and following procedure. After washing my hands thoroughly and receiving a briefing on food safety, I’m ready to start work.

My first stop is at the sandwich-making station. Food service workers Ophelia Rabanal and Allan Naguit are throwing together turkey breasts, whole grain bread, and lettuce at blinding speeds.

Rabanal takes a quick break to explain the method to me: build the sandwiches double-high to maximize efficiency, aim for three ounces of turkey on each sandwich, and change your gloves frequently to avoid contamination.

As I start making sandwiches—at a notably slower clip than my colleagues—I casually ask Rabanal how many we’re planning to make.

Much to my chagrin, the kitchen at Laguna Middle is actually one of the busiest in the county, as it’s the central food hub for most of the San Luis Coastal Unified School District.

“All the schools put together have just over 7,000 students,” Chavez says. “We only have 33 food service staffers for the whole district, so we have to cover a lot of ground.”

While the “central kitchen” arrangement makes a lot of sense for the district, it also means there’s abundant work to be done at Laguna.

As we steadily work our way toward 400 sandwiches, Rabanal and Naguit explain that they’re both food service industry vets. Naguit has worked for the district since 1999, and Rabanal works for the district as a sub after 30 years in the industry, largely at the California Men’s Colony.

“I like it because it’s fast-paced,” Rabanal says. Naguit concurs.

This line is supposed to make a mere 106 sandwiches for faculty and staff members, so I can take a little more time layering pesto mayonnaise, spinach, tomato, and turkey.

I’m not nearly at professional speeds yet, but I’m gaining a little confidence with every sandwich. It’s getting to be late morning, so some workers are departing to serve food at the elementary schools while others are gearing up for lunchtime at Laguna.

I’m sticking around at Laguna, so my next task is a dexterously challenging stint at an actual assembly line, conveyor belt and all.

An aluminum tray glides down the belt, and one person drops in a handful of tater tots. The next person adds a handful of chicken nuggets, and the last wraps the dish with aluminum foil. It all seems so basic.

Basti appoints me the nugget guy. After graciously slowing the belt down a few notches, my colleagues can’t help but laugh as I still struggle to keep up with the pace. The nuggets have bested me.

As she flits around the kitchen, checking in on all the various stations, Basti notes, with a wink, that the assembly line “isn’t as moving as fast as I would like.”

Taking that as a cue, I segue to a more journalistic role, roving around the kitchen and peppering the workers with questions.

Over at the gigantic metallic steam kettle, head cook Mark Moore (one of the only men in the kitchen) is stirring up noodles for today’s lunch special: spaghetti and meatballs. 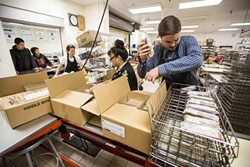 Moore explains that he can also cook about 200 pounds of ground beef (for taco meat) at a time in the kettle, which he stirs with what looks like an oversized canoe oar.

Though the kitchen obviously has to cook in large increments and must adhere to strict state and federal nutritional guidelines, Moore says he takes pride in creating breakfast and lunch specials that change daily.

“I really dig that freedom to do my own thing,” he says.

Around the kitchen, other workers are more effusive about Moore’s skill.

I take my lunch break with Moore and French. We eat in the empty cafeteria, right before the hordes of seventh- and eighth-graders are scheduled to descend.

French and Moore agree that serving and interacting with the kids is their favorite part of the job—Moore’s son actually attends Laguna, so he says that’s an added bonus. Both say that the prep work, cooking, and political parts of their jobs are more difficult and less rewarding.

It surprise me to hear them mention politics, but it turns out the kitchen is a rather hierarchical system, and almost all of the food workers are members of the local SEIU union. The annual job-bidding event is set to take place after work today, and both Moore and French are worried but hopeful that they’ll be able to lock up their desired spots. 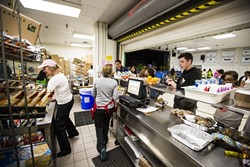 Suddenly, our brief break is ended with a call to order from Basti. The main show is set to begin: It’s lunchtime.

Laguna has roughly 700 students, and they all cycle through the cafeteria in two noisy, frenetic shifts. Everyone on the kitchen team, though, is at the top of his or her game, and it’s thrilling to watch.

Basti and Moore each take a window and hand out all types of hot lunches, beverages, cookies, sandwiches, pizza slices, and fruit with practiced ease. No one is flustered in the slightest. New Times photographer Henry Bruington is snapping photos left and right.

As a seventh-grader with oversized sunglasses sidles up to the lunch counter, Moore jokingly asks if she’s trying to hide from the paparazzi.

“Yeah,” she says with a smile before shuffling away with a slice of pepperoni pizza.

Before I know it, the lunch hour is winding down. As the last of the students trickle out of the cafeteria, Basti’s hyper-efficient, immaculate kitchen is already almost entirely cleaned up.

Though it’s just a few minutes before 1 p.m., I feel like I’ve already worked a full day. I tell Basti that I have to get back to my day job and transcribe my notes. She tells me I’m free to keep my hairnet.

Before I head out, I ask her what she thinks the hardest and most rewarding parts of running the Laguna kitchen are.

“The hardest part for me is that I’m real detail-oriented, so I want all our food to go out perfectly every time,” Basti says. “It’s not always perfect, but it’s as close as possible, and that’s rewarding. I take a lot of pride in what we make.”