On a high note

The first concert of the SLO Symphony’s 2017-18 season will be Oct. 7 at 8 p.m. at the Cal Poly Performing Arts Center, featuring Maestro Andrew Sewell leading the orchestra and a performance of the Aotearoa overture by New Zealand composer Douglas Lilburn. Visit slosymphony.org for more information.

"California," is the cheeky one-word answer New Zealand native and conductor Andrew Sewell offers up when asked what drew him to seek out the job of San Luis Obispo Symphony musical director.

But the real answer as to how Sewell landed the job that his predecessor held for 31 years has more depth than dreamy coastlines and waves—this particular maestro loves a challenge.

"I felt I could make a difference," Sewell said. 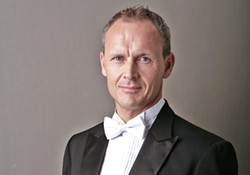 After the contentious departure of the symphony's former music director Michael Nowak in 2015, the organization spent more than a year looking for his replacement, whittling down 133 applicants to just four finalists who each performed with the orchestra during the 2016-17 season.

While taking over after several decades under one vision might seem daunting, it's nothing new to Sewell who stepped into his current role leading the Wisconsin Chamber Orchestra 17 years ago, on the heels of a conductor who had led the group for 28 years. Sewell saw that job the same way he sees the position in SLO: as an opportunity to change things up. Sewell said he's starting with expanding the scope of the SLO Symphony beyond the city limits, where the group has historically held the majority of its performances. In addition to looking at obvious venues like Cuesta College's Cultural and Performing Arts Center at the edge of SLO city and the Vina Robles Amphitheatre in Paso Robles, the symphony is also considering non-traditional venues like churches and vineyards across the county.

In the short amount of time he spent in SLO County, Sewell said he picked up on the fact that you have to meet the people where they are, with many treating the Cuesta Grade on Highway 101 like a barrier as cumbersome as the Great Wall of China.

"We want people to know that we serve the whole county, north and south," Sewell said. 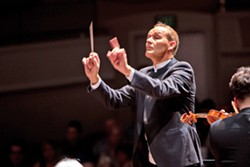 As a young boy growing up in New Zealand, Sewell's parents took him to see the New Zealand Symphony Orchestra and he was hooked. While he started out playing violin and piano professionally in his home country, from the time Sewell was 14 he knew he wanted to lead the symphony.

"It intrigued me," Sewell said. "I was fascinated by all of the instruments in the orchestra. It wasn't going to be enough just to sit and play."

In October 2016, Sewell led the SLO Symphony through pieces like Beethoven's 5th Symphony and Rossini's overture from the comedic opera The Barber of Seville at his performance and audition at the Cal Poly Performing Arts Center. Incoming board president for the symphony, David Hamilton, said it was clear that Sewell was the unanimous pick for the job. Hamilton said that Sewell's ability to communicate clearly with orchestra members what he wanted from them musically made him stand out from other candidates.

"Not being able to properly express that can be problematic," Hamilton said. "His ability to push them to be better artists is paramount."

While Sewell's contract with the Wisconsin Chamber Orchestra runs through August 2019, he is already planning the program for the SLO Symphony's upcoming 2017-18 season and will travel back and forth in the meantime. For the first concert of the season on Oct. 7, Sewell plans for the symphony to perform his signature piece, the Aotearoa overture by New Zealand composer Douglas Lilburn, the title of which is taken from the native Maori name for the island and translates roughly to "land of the long white cloud."

The second concert of the upcoming season happens to fall on Veteran's Day, Nov. 11. That show will have a decidedly patriotic feel, featuring the works of American composers like Gershwin and Bernstein, along with Copland's Fanfare for the Common Man, written in response to the U.S. entering World War II.

"It stirs up feelings of gratitude," Sewell said of Copland's famous piece. "It's like playing 'The Star Spangled Banner.'"

Sewell said he hopes the community knows that going forward they can expect enthusiasm for all types of music and a high standard of performances from the symphony.

"We're moving into a new era of professionalism," Sewell said. "We want to be known as the crown jewel of SLO County."

Correction: The new music director for the San Luis Obispo Symphony is named Andrew Sewell. An earlier version of the story incorrectly stated Sewell's first name in the first paragraph.