The many shades of white 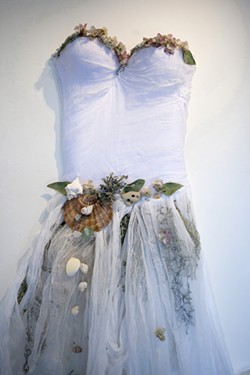 A plastic bag is a thing of beauty and elegance—at least in the hands of artists Melinda Forbes, Jennifer Blue, and Peg Eckert, the women behind the SLO Museum of Art’s “White Gowns” show, a monochromatic exhibition of repurposed materials. Plastic is paired with pearls, and pistachio shells accent vintage silk. The disposable is married to the treasured with a needle and thread.

The three women, working in purposeful isolation from one another, created the exhibit with only the common notion that the dresses should be white, and that they each would employ found items. All other details were left to the individual designer. And yet, as Forbes pointed out, a common line runs through the body of work. Though made to be worn, the dresses are more sculpture than garment. Blue incorporates a nesting bird into the right shoulder of one of her dresses. Another of her works, Gaia’s Gown, evokes seaweed and foamy waves.

“I’m not sure why I chose to work in white,” said Forbes, who admits she never wears the color. But somehow, the simple elegance of white captivated her imagination.

“Even though most of the materials are broken down and have gone beyond their time, they still retain that elegance, just being that color,” Forbes said.

And as the dresses are made of things that were once cherished possessions, each piece has a story, real or imagined.

Eckert bought a petticoat at an estate sale and a slip from a thrift store; later, she learned that the two garments once belonged to the same woman.

Forbes’ Clementine’s Dress is made of long johns, sugar sacks, and cheesecloth. She was inspired to create a narrative surrounding the piece: “Clementine” was engaged to be married, but had no money for a wedding dress. In a stone soup sort of way, she asked members of  her family to contribute the dress’s strange components.

“I’m the storyteller,” said Forbes, who enjoys “just going to thrift stores and finding garments, and kind of listening to what that garment says.”

One of her pieces is made from a 1941 slip, worn under a wedding dress. The slip, Forbes noticed, wasn’t sewn in the usual style of the day, leading the artist to postulate it was hastily thrown together to remedy a too-translucent wedding gown.

Suspended from the ceiling, the thin white dresses are an eerie presence in the museum’s tiny McMeen Gallery, presenting the illusion of a captive, ghostly audience. The gowns are pale echoes of past lives, twisting in the slightest breeze, whispering of bygone eras.

I can’t believe Arts Editor Anna Weltner made it through this story without an American Beauty reference. Contact her at aweltner@newtimesslo.com