The many sounds of silence: L.A. Theatre Works takes on 'The Graduate' as a radio play at the PAC 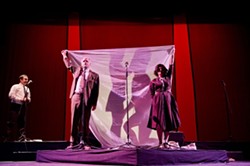 How does one stage a film like The Graduate? The desperation of the film’s long drives; the isolation of Dustin Hoffman’s scuba dive into the pool; the tracking shot winding its way through the party guests, who seem to peck at our hero like so many hens at the opening of the 1967 film? Was that even a question just now?

What this story needs most, in any case, is space—space to breathe, space in which to drift, space to drive across in a red Alfa Romeo, space in which to worry, as Benjamin Braddock does, about his future. So a theatrical version of Mike Nichols’ film—itself adapted from Charles’ Webb’s novel—seems like it would run counter to the story’s soul.

And yet The Graduate was a great success as a stage adaptation in 2002, when it opened at the Gielgud Theatre, on London’s West End. Now, the same script has been adapted by L.A. Theatre Works in the style of a live radio play, and is currently on a national tour. Through voice work and elaborate sound effects, L.A. Theatre Works’ version eschews realism for evocation, tapping into the wide-open space of the human imagination. Actors speak into a box to suggest the muffled voice of a parent imploring Ben to come out of his room; an egg crate recreates the squeaking of a mattress in the film’s multiple sex scenes.

The touring production, featuring a cast of Hollywood actors under the direction of Brian Kite, makes a stop at the Cal Poly Performing Arts Center on Tuesday, Nov. 19. Kite is the producing artistic director of La Mirada Theatre for the Performing Arts. When we spoke over the phone, he had just received two Ovation Awards—L.A.’s top theater honors—for Best Director and Best Season. But he’s also been receiving enthusiastic reviews for The Graduate.

Television actor Brian Tichnell stars as Benjamin, the disillusioned 21-year-old college grad returning home. Heidi Dippold—known for appearances on The Sopranos and All My Children—is Mrs. Robinson, the unhappy wife of Ben’s father’s business partner, with whom Ben finds himself in a short-lived affair.

Jill Renner, who previously shared the stage with Annette Bening in a production of Euripedes’ Medea, plays Mrs. Robinson’s attractive daughter Elaine, with whom Ben has fallen in love by the end of the summer. The production also stars Matthew Arkin as Mr. Robinson; Tom Virtue as Ben’s father, Mr. Braddock; Diane Adair as Mrs. Braddock; and Darren Richardson as the psychiatrist.

A scene in which Ben’s father and family friends pressure him into trying out a new scuba diving suit in the family pool is executed to great effect in the 1967 film. We watch the scene from Ben’s perspective: isolated within his mask, unsure of his step in his unruly flippers. His own panicked breathing drowns out all other sounds, rendering the gaggle of shouting, gesticulating grownups as alien and menacing as a hostile tribe.

“I think it’s a great way to set up that isolation, that sound of just the bubbles,” said director Kite. “It’s very aural, that part of the movie, anyway, and I think it’s great for a radio play, where we are concerned about what everything sounds like. … You feel how Ben feels, surrounded by that diving suit, the water, and the isolation of it all.”

In both versions, the confusion and alienation of the scene haunt the story. It was these elements that made the film a classic, resonating with future generations of aimless college graduates. Uninterested in the corporate world (“Plastics!”), unable to go back to the world of academia, and chafing under the admonishments of his parents, a confused Ben finds himself in a tangled love affair.

On stage, these elements are conveyed through unique use of dialogue, as well as clever blocking and lighting techniques. In the seduction scene in particular, for example, Ben and Mrs. Robinson are seen silhouetted through a bed sheet. In a bit of added symbolism, Ben’s parents hold the sheet aloft, as they carry on a scene of their own, oblivious.

“It is written as two scenes that happen simultaneously,” Kite said, “the parents in the house saying”—here he adopted Mr. Braddock’s snappy, high-strung voice—“‘Ben, what are you doing, get going, you’re just laying around, you can’t just lay around here forever, you gotta get out there!’”

Meanwhile, the audience catches a glimpse of Ben and Mrs. Robinson in their hotel room.

When casting Ben, Kite said he was looking less for Dustin Hoffman and more for an actor who could capture Ben’s contradictions: awkwardness and charm; good-looking but not overly confident. He seems to have found this in Tichnell.

Kite also sees this version’s Mrs. Robinson as a more likeable character than the one portrayed by Anne Bancroft in the film.

“She is much more worldly,” he conceded. “She’s been around more. She’s seen more. She understands what life can do to you. But there’s a line that says, ‘Have you done this before?’ and she doesn’t answer. But I’m pretty sure she hasn’t done it before, you know. And I think that’s a better way to approach the play. She’s not some seductress out there after everybody; this is just something she, in the moment, suddenly is doing.”

Directing the play has also caused Kite to take a closer look at the story’s more serious underlying themes. Audiences tend to recall The Graduate as a comedy, Kite observed, and thus are sometimes taken aback by the despair and frustration that lingers beneath the story’s surface.

“It’s a comedy, it’s fun, but it’s not fluff,” he concluded. “It’s got relevancy and it matters. The issues they were struggling with in 1967 are the same ones we have today, with young people trying to figure out what to do next, and what their parents want and there’s a war going on—there’s so many similar things happening in the lives of people coming out of college in their 20s now that it hits home for a lot of people. This decision of, what do I do next, and feeling trapped, is all part of The Graduate.”