THE MAP OF TINY PERFECT THINGS

Ian Samuels (Sierra Burgess is a Loser) directs this young adult fantasy romance written by Lev Grossman and based on his short story of the same name. Mark (Kyle Allen) is caught in a time loop, waking up every morning to the same day on repeat. He doesn't seem to mind, blithely going through the same 16 hours knowing there are no consequences. It's a comfortable rut, but then he meets Margaret (Kathryn Newton), who's caught in the same time loop. They begin spending time together, showing each other some of the tiny perfect things they've discovered in their constantly repeated day. (98 min.) 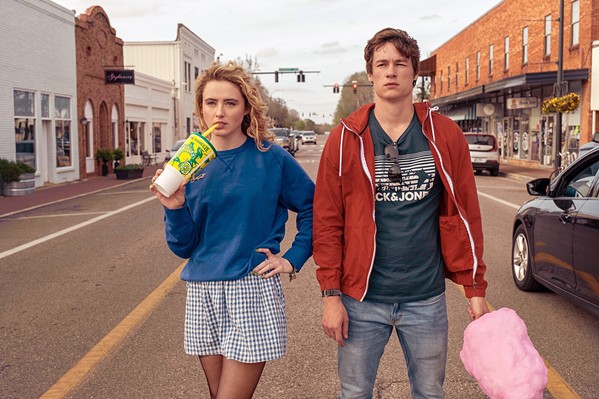 Glen Like Palm Springs (2020), The Map of Tiny Perfect Things takes the Groundhog Day (1993) idea and puts its own unique spin on it. Mark is a likable guy, carefree and happy to spend his day driving construction machinery through town, trying to woo a pretty girl at the community pool by saving her from a beach ball that knocks her into the water, and doing other random things to entertain himself. He's a standard-issue selfish teenager who bickers with his sister, Emma (Cleo Fraser), and hangs out with his bestie, Henry (Jermaine Harris). His dad, Daniel (Josh Hamilton), is writing a book about the Civil War, and his mom is always driving off as soon as he wakes up. Like self-involved newscaster Phil (Bill Murray) in Groundhog Day, Mark has a lesson to learn, but he's nowhere near ready. Meanwhile, Margaret has her own travail to deal with, though it's a mystery. Each repeated day she receives a text message and suddenly rushes off. Mark has a lot of growing to do, and in Margaret, he finds someone other than himself to care about. What follows is a tender, funny love story.

Anna The film starts off with Mark basically performing a circus act while his dad and sister sit at the breakfast table. He's catching mugs about to fall, flipping butter up into the air, teasing his family by playing myna bird to their banal breakfast talk—he's clearly been through this morning countless times. Luckily his spirit has not yet been broken by the repetitious cycle; he still seems to have a great time fixing minor problems around his quaint little town, whether it is letting someone know where their missing keys are or shouting out "bless you" a few seconds before a stranger sneezes, Mark has the events of the day memorized. While he may seem pretty happy-go-lucky, Mark also can't help but feel lonely. When his day-to-day is all of a sudden shaken up by Margaret, he's beyond excited to have someone to share the ins and outs of life as they're stuck in a circle. To his surprise, Margaret even has some cool things to show him that he hasn't seen before, and soon the two start building their map of all the little things that bring them joy—even if they've seen them a hundred times. It's a lighthearted teen rom-com, perfect for those moments when you need a bit of sweetness in your life.

Glen It is pretty lighthearted ... until it isn't. Margaret's secret is a pretty heavy one, and when Mark discovers it, it leads to a reassessment of his own life. He thinks his dad is a fool for quitting his job to write a book on the Civil War, his mom feels absent, and he has zero interest in his sister or her stupid soccer game. Margaret makes him realize he's not the center of his story but instead a player in hers, and his family isn't useless and boring, he's just checked out from caring. Ultimately, this is a story about Margaret learning to heal herself and move on, and Mark growing up and learning to care about someone or something other than himself. It's sweet bordering on maudlin, and obviously the time loop idea is derivative, but I really like these characters. I don't recognize either Kathryn Newton or Kyle Allen from any of their past work, but they're very engaging here, striking the right notes of teenage ennui. You want things to work out for them, for them to find a way out of their rut and into a new life together. Ain't love grand?

Anna It definitely delves into some deeper places emotionally. Margaret doesn't want their time loop to end, and when you realize why, it all makes sense. Mark starts to see that he's actually pretty lucky he got stuck in such a mundane day. It's very cute to watch these two as they map out all of these perfect little moments and fall for each other. They're both smart, but when Margaret pokes fun at Mark for being a "nerd who's bad at math," he decides that maybe goofing off isn't the best way to spend every day and actually starts using his time for some self-betterment. It's a story of growth and growing up for these two, and a story of their friendship and the early days of teen romance. This one is bound to give you some nostalgia for those little moments that seem so big when you were first entering a young budding romance. Don't play the comparison game with this one and Palm Springs or Groundhog Day—give it a chance to shine all on its own. Δ