The march to St. Paddy's Day

It’s nearly St. Paddy’s Day, and everything’s coming up Irish. What follows are a few upcoming events to celebrate this favorite local holiday.

First, don’t forget that The Young Dubliners will kick off the festivities with a show on Thursday, March 12 at Downtown Brew. Fronted by Keith Roberts, who now lives in Paso Robles, it’s a rare local show before the band hits the road for another long string of national and international concert dates. They’ve got an awesome new album out, Saints and Sinners, that’s a must-have for Celtic rock fans. Reckless in Vegas will open, as well as superb quirky local folk rock act Threes & Nines.

The pints will flow as the one and only High Grade Pats featuring the Gratuitous Laddies take over the stage at Mother’s Tavern on Saturday, March 14, at 9:30 p.m. The group plays traditional Irish songs and sea shanties made popular by artists such as the Dubliners, Wolfe Tones, the Clancy Brothers, and the Pogues.

On St. Paddy’s Day itself, Tuesday, March 17, if you want to get the party started early, check out Still Time when they play a 6 a.m. show at Downtown Brew. Yes, you read that right: 6 a.m. That’s rock-star style for those of you who rang in the holiday at midnight the night before and never stopped partying afterwards. By the way, Still Time is really starting to heat up. They’ve recently scored opening gigs for Dishwalla, Jackie Greene, and UB40! Awesome.

The Central Coast Pipe & Drums says, “Saint Patrick brought Christianity to Ireland. Let’s celebrate that fact with some pipe music and debauchery!” On Tuesday, March 17, they’re inviting all to join them for a Tartan Tuesday Tour and SLO County Pub Crawl. It starts in Paso Robles in the Crooked Kilt at 10 a.m., moves to Level 4 at 11, heads to SLO Town bars from 1 to 3 p.m., then goes to Harry’s in Pismo at 4 p.m., followed by R & D’s from 5 to 7 p.m. For more info, call 235-2637.

Of course, on St. Paddy’s Day, all roads lead to McCarthy’s Irish Pub. Perhaps now that it’s in its new, larger location, the wait will only be minutes and not hours.

As Irishman Thomas Osborne Davis said, “Come in the evening, come in the morning, come when you’re looked for, come without warning.”

After Scott Andrews of the awesome jazz/funk act Body got shunned from the Concerts in the Plaza … again, he decided to take matters into his own hands, which is why he’s organizing a world-class jazz festival for SLO Town for this summer. Before that, however, he’s got the inaugural SLO Winter Funk Festival, held on Friday, March 13 behind Trader Joe’s and Food for Less in SLO. Gates open at 5 p.m. and the event will end at 10. The idea is to raise awareness for his summer fest.

“This is a new festival to start building awareness of the creative music bands on the Central Coast, along with honoring the businesses who are helping promote and produce the upcoming SLO Jazz Festival,” said Andrews. 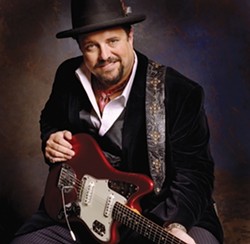 The best way I can describe Raul Malo, former frontman for the Mavericks, is his vocal sound hovers somewhere between Elvis Presley and Chris Isaak. His voice is fuller than Isaak’s but not quite as honey-smooth as Presley, but it’s undeniably impressive. On his first new album in seven years, Lucky One, he runs through a range of country, rock, and pop tunes.

“I’ve been fighting my whole life against people who want to pigeonhole music,” said Malo. “I feel like I’ve got no restrictions anymore.” 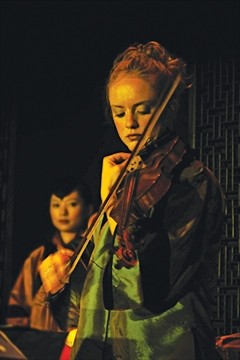 U.S. National Scottish Fiddle Champion Hanneke Cassel, who was also nominated for the Boston Music Award “Best Folk Act,” plays a couple of SLO Folks concerts this week. After summers spent at Scottish fiddle camps and a stint at Berklee College of Music on a string scholarship, she graduated in 2000 and continues to be an active member of the Boston music scene.

If you haven’t already seen Pink Floyd live, this may be the closest you’ll ever get to that experience. On Thursday, March 12, at 8 p.m. in the Cohan Center, Cal Poly Arts presents The Pink Floyd Experience, a stage production homage to one of rock’n’roll’s all-time greatest acts. This show features 200,000 watts of light, over $2.5 million worth of production equipment, and six brilliant musicians on the stage. It’s like a Pink Floyd stadium show at the peak of their career, but in the intimate comfort of the PAC. Hear “Money,” “Wish You Were Here,” “Time,” “Have A Cigar,” “Comfortably Numb,” “Another Brick in the Wall,” and much more. Tickets range from $36 to $48, available at the PAC Ticket Office or by calling 756-2787.

Austin-based singer-songwriter Jean Synodinos hits Linnaea’s café on Friday, March 13 for a free 8 p.m. show, and judging from her alternately rip-roaring then gentle CD Breathe, this one ought to keep you guessing. She skates between folk, blues, jazz, and pop, and Monterey’s James Meder will play an opening set. Good stuff, people.

Cal Poly’s University Wind Orchestra and Wind Ensemble will present “From Russia With Love” at 8 p.m. Saturday, March 14, in Harman Hall in the Performing Arts Center’s Christopher Cohan Center. Hear Peter Tchaikovsky’s “Dance of the Jesters” and continue with Dmitri Shostakovich’s “Festive Overture” and “Folk Dances,” among others. Tickets are $8 to $19. Call 756-2787.

Guitarist Frank Potenza and his organ trio are the next attraction at the Famous Jazz Artist Series at the Hamlet in Cambria on Sunday, March 15. Potenza, an Azica Records recording artist, will showcase his latest album that features jazz organist Joe Bagg and drummer Steve Barnes. Series co-producers Charlie and Sandi Shoemake (vibraphone and vocals) will also be on hand. There’s a 4 p.m., $15 show; a 7:15 p.m., $12 show; or see both for $20. Call 927-0567 for reservations.

Enjoy an afternoon of lovely chamber music on Sunday, March 15 at 3 p.m. at Trinity United Methodist Church in Los Osos when effervescent soprano Maria Jette makes her second appearance with the San Luis Obispo Symphony in a little more than a week. In this intimate chamber concert, Ms. Jette will be joined by Grammy Award-winning violinist Kathleen Lenski and the Symphony Chamber Players, including conductor and violist Michael Nowak, violinist Paul Severtson, cellist Nancy Nagano, bass player Lara Lehmer, oboist Wayne Asbury, and harpsichordist Barbara Hoff. Tickets are $35 for premium reserved seating and $25 for general reserved seating. Students may purchase tickets at the door for only $10 (while they last.) Call 543-3533.

Direct from Sweden, Epitaph Records pop punk sensations Millencolin play, plus the Briggs and New Tomorrow, on Monday, March 16, for a 7 p.m., all-ages show at Downtown Brew. Millencolin only gets to the States every three or four years, and this is their first show ever on the Central Coast. They’re touring in support of their new album Machine 15. “There’s a lot of stuff that adds up to fifteen,” guitarist Mathias Färm jokes. “I used to drink fifteen beers when I’d go out! I’m a Viking!” Yeah, yeah. Who isn’t?

They’ve been called America’s new “First Family of Bluegrass,” and for good reason. The multi-Grammy nominee Cherryholmes has created a sound that’s been called “bluegrass on steroids.” On Thursday, March 19, at 8 p.m. in the Spanos Theatre, Cal Poly Arts presents this amazing family band, touring in support of their latest hit release, Cherryholmes III. Tickets range from $28 to $34, available at the PAC Ticket Office or by calling 756-2787.

LeRoy Bell & His Only Friends hit Downtown Brew on Thursday, March 19 for a 7:30 p.m. show. After performing last month with Etta James at the Paramount Theater in Seattle, and having shared the stage with the likes of B.B. King, Michael McDonald, Idina Menzel, Los Lobos, and others, they’re ready to blues you up. Tickets are $5 presale.

Glen Starkey thinks if he drinks enough green beer, he’ll be Irish on the inside. Buy him a pint at gstarkey@newtimesslo.com.

Folding the sweet, warm folk-rock of 1970s Laurel Canyon into their usual mosaic of downbeat production, Numberg producers Florian Seyberth and Peter Heider have expanded on their dub-electronica past, moving into a fusion of organic folk with sublime studio production. This isn’t an unforeseen leap. On their 2003 release, Juke Joint, they compiled a tribute of their favorite musicians, coming up with unpredictable segues, like blending the urban soul of Paul Weller’s “Wild Wood” directly into Greg Brown’s earthy ballad “Blue Car.” On Grains, they continue exploring the spirit of acoustic singer-songwriters, merging it with laptop aesthetics. On “Same Sun,” British singer Rumer muses her folksy vocal over a breezy, relaxed beat. As if translating Fleetwood Mac’s golden era for an ear more familiar with the spaced-out vibe of Thievery Corporation, Boozoo Bajou have produced an album perfect for cucumber-covered eyes on a summertime chaise lounge. Sophisticated, yet languidly cool.

Resuscitating the hypnotizing folk of ‘70s-era California, Alela Diane has tapped into the same incandescent vein that Joni Mitchell spilled forth on her early albums, mixing sunny and haunting tunes with lyrical beauty. Coming out of Nevada City, California (the same breeding ground that brought us Joanna Newsom), the influence of her natural setting informs much of her album, as earthly wildlife is the launching point of her songs. “The Alder Trees” is filtered with lyrics about “mud and snake skin” as the “alder trees were listening to songs that have been sung before”; it’s an entrancing step back into nature, one that’s usually associated with a Shaman rather than a 25-year-old songwriter. Yet, it’s Alela’s full-throated voice that can pull serenity out of mournfulness, which slowly bewitches you into a coastal past of simple pines and ocean waves. With assistance from her guitarist/producer father, this is a family affair that sits profoundly right for this modern artifact of rural landscapes and Americana wonderment.