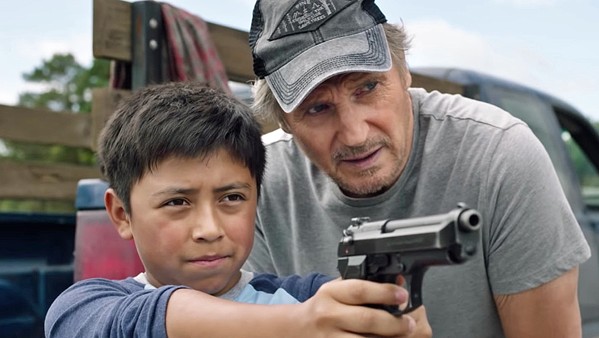 Robert Lorenz (Trouble with the Curve) directs this so-so action thriller about Arizona rancher, former Marine, and Vietnam vet Jim Hanson (Liam Neeson), who feels obligated to save Miguel (Jacob Perez), a little boy crossing the border after the boy's mother is killed by a dangerous drug cartel, which is committed to finding and killing the boy. The pair, wary of one another at first, begin to form a bond as they set out for Chicago, where Miguel has family. Naturally, the cartel is in hot pursuit, and a series of skirmishes follow as they try to escape.

The story is clearly going for a Clint Eastwood vibe: Think The Mule and Gran Torino in particular. Hanson's a good man about to lose his ranch to the bank because of his deceased wife's cancer medical bills. He's not without compassion, but he's the kind of guy who calls in "IAs"—illegal aliens—when he sees them crossing the border during his ranching duties. He's desperate for money to save his ranch, so when Miguel's dying mother, Rosa (Teresa Ruiz), promises him a bagful to get her boy to Chicago, he ignores his moral code and agrees.

It's pretty derivative and farfetched. Why the cartel would go to such lengths to kill a little boy makes no sense, and for a film called The Marksman, I was expecting Hanson to be a better shot. The ending is exactly what I would expect, but as a Neeson fan, I was OK spending $1.80 to watch his aging ex-Marine fight one final battle. If you miss it, you haven't missed much. (108 min.) Δ