The Matrix Resurrections tries to be different, but is a hollow echo of the first movie

By Caleb Wiseblood and Bulbul Rajagopal

Editor's Note: Staff Writer Bulbul Rajagopal and Calendar Editor Caleb Wiseblood are filling in for the Starkeys, who are on vacation.

A resurrected Thomas Anderson is trapped in a smaller but more powerful version of the Matrix with no memory of his life as the savior Neo. After an ally named Bugs frees him, Neo has to make the choice to save the human race all over again, but it's tougher than ever. (148 min.) 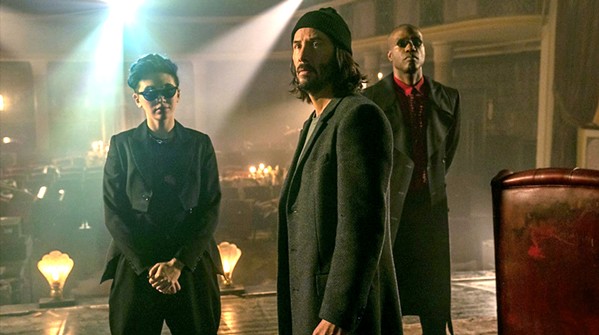 Bulbul The first hour of this 2 1/2 hour movie struggles to break the fourth wall with puns and dialogues about the original trilogy and characters moaning about how sequels are never as good. The fourth addition to the 1999 franchise finds a resurrected older Neo (Keanu Reeves) trapped in the Matrix as his powerless alter ego, Thomas Anderson, just like in the first movie. But Resurrections got some 2021 updates. Convinced that the events of the Matrix trilogy didn't happen, Anderson is now a world-famous video game developer who turned the plot of the three movies into a beloved video game. The Matrix has been rebuilt into a stronger structure by a program called the Analyst. It suppressed Neo's memories, and they come back to him in the form of dreams that repeatedly make him question his sanity. His blue-pill-pushing therapist (Neil Patrick Harris) tells him it could be all in his head. But Neo soon finds his way back to the red pill, and fights to carve a way out with help from Morpheus (now played by Yahya Abdul-Mateen II), Bugs (Jessica Henwick), Sati (Priyanka Chopra), and a restored Trinity (Carrie-Anne Moss), to name a few. Resurrections is supposed to be Neo and Trinity's homecoming, what with their deaths at the end of the 2003 trilogy that saves Zion from the machines. But the movie is labored and leaves us with more questions than ever.

Caleb I'll start with the positives. I enjoyed Neo's introduction as a ritzy Zuckerberg-era video game developer, but we don't get to explore that side of his new life nearly long enough. When he's not at work, or in therapy, or sitting in a bathtub during a Jefferson Airplane montage, Neo goes to the same coffee shop most days to try to strike up conversations with another frequent customer, Tiffany, a "happily" married woman he finds extremely familiar, as if they were once lovers in a past life. It's easy for viewers to figure out why, since she's played by Moss. As for new faces though, Jonathan Groff, who Hamilton fans will recognize fondly as King George, puts his own spin on this entry's iteration of Agent Smith, the iconic sunglasses-wielding villain previously played by Hugo Weaving. Smith is introduced as Neo's boss at work, or business partner, although he gives off evil movie-boss energy. Unfortunately, once the film's obnoxiously bloated plot progresses and these initial facades of Neo, Trinity, and Smith begin to dissipate, so does my attention span.

Bulbul One thing that does grab my attention about the fourth installment is that it's the first in the franchise directed by only one of the Wachowski sisters. Helmed by Lana Wachowski, Resurrections feels incomplete without the creative vision of Lilly. I did enjoy Neo's trip to Io—a blossoming community led by Niobe (reprised by Jada Pinkett Smith) who has aged 60 years since the trilogy concluded. She shows Neo that Io flourished under a partnership between humans and the machines, something that Zion—the previous human settlement—failed to realize. I also appreciated that Trinity is seen as truly equal to Neo, to such an extent that the Analyst acknowledges that they're whole together. Trinity gains the power to fly unlike the resurrected Neo, and can even see the code from inside the Matrix. But I had to scrape the bottom of the barrel to find these positives, and they're not enough to distract me from this limp deconstruction of a movie. This should have been a fresh slate to show us another exciting exit for Neo from the Matrix. Instead, Resurrections couldn't resist basking in the glow of the first game-changer of a movie.

Caleb I also enjoyed the film's addition of machines that decide to team up with the humans, rather than enslave them. I think it was both cute and unintentionally amusing that some of these machines also decide to shape themselves to resemble animals—probably to help their human counterparts understand that they're good guys now? One of these large four-legged critters nuzzles up to Neo's face like a pet cow, and it's adorable. As much fun as it is to see Reeves play Neo again, I think it was a mistake to continue his storyline from the previous films. I would have much rather seen a new story with new characters that takes place in the world of the Matrix, similar to what the Wachowskis and a group of collaborators accomplished with 2003's The Animatrix, an animated anthology of standalone vignettes that are superior to any of the original film's sequels. If I was at the pitch meeting for The Matrix Resurrections, I would have suggested a prequel exploring how the machines took over our world, as The Animatrix does. Or how about a buddy comedy from the point of view of Neo's new robot cow? Δ