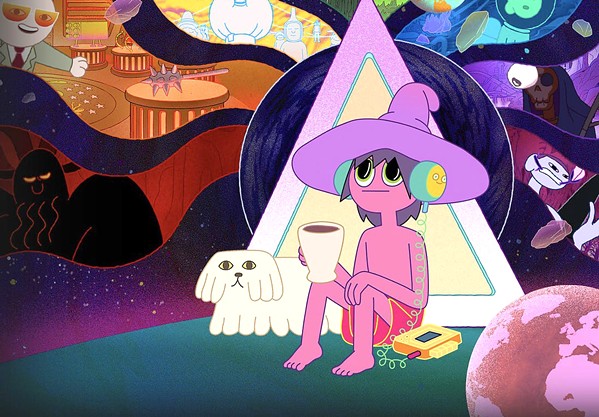 File The Midnight Gospel in the frying-on-shrooms, late-night-dorm-room-discussion category. The surrealist animated series revolves around Clancy (voiced by Duncan Trussell), an outer-space podcaster with one listener, who uses his malfunctioning multiverse simulator to visit dying worlds and interview their inhabitants.

In episode one, for example, Clancy visits Earth 4-169, a world in the midst of a zombie apocalypse, where he meets and interviews the president. They casually debate the pros and cons of psychedelic drugs and whether they can help interpersonal growth as they fight off zombies.

In episode two, Clancy visits "Clown World," which is filled with weird creatures generated by a pop-up ad that infected his computer. He interviews a deer-dog creature about death as they're both sent to the slaughterhouse by the clowns, eventually turning them into sentient meat-mush creatures. It's really weird, somewhat sophomoric, but surprisingly philosophical. (Eight 20- to 36-min. episodes) Δ