The Midnight Sky moves slowly toward a satisfying conclusion

George Clooney stars in and directs this post-apocalyptic sci-fi adventure based on Lily Brooks-Dalton's 2016 novel Good Morning, Midnight, about terminally ill scientist Dr. Augustine Lofthouse living in a remote research outpost in the Arctic, where in 2049 he works to discover potentially habitable planets. The facility is being evacuated amid a mysterious global catastrophe. Augustine decides to stay, hoping to contact the crew of the Æther, an exploratory spacecraft returning from a mission to K-23, a habitable moon of Jupiter. The crew of five—Cmdr. Adewole (David Oyelowo), Dr. Iris "Sully" Sullivan (Felicity Jones), Maya (Tiffany Boone), Sanchez (Demián Bichir), and Mitchell (Kye Chandler)—have no idea the Earth will soon be rendered lifeless. As he awaits the spacecraft to reach radio contact, he discovers a mute girl named Iris (Caoilinn Springall) has been left behind at the station. (118 min.) 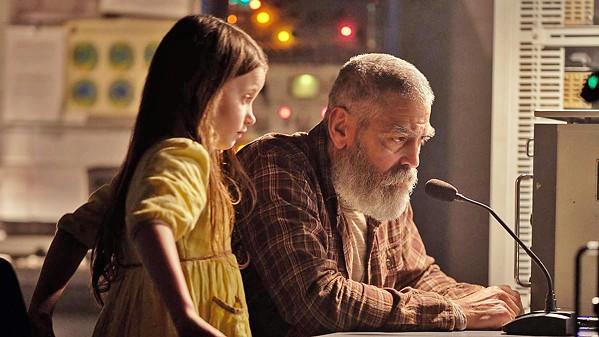 Glen Free with your Netflix subscription, this new, sci-fi adventure has been panned pretty hard. Its Rotten Tomatoes critics' score is 52 percent, and its audience score a dismal 26 percent. Frankly, that seems very unfair. Yes, some of its criticisms are accurate—it's slow-paced, takes itself too seriously, and feels atmospherically austere—but it's also emotionally potent, especially going into the third act that features a twist I probably should have seen coming but was glad I didn't. Clooney plays Augustine as a broken man, forced to mechanically cycle his blood daily, prone to too much drink and far too much introspection. In flashback, we discover an early failed romance. He chose his work over a family, and that seems to haunt him. When he discovers Iris living in the outpost, he doesn't know what to do with her. His ability to form human connections is clearly stunted. The second act speeds up a bit when he realizes he and Iris must leave the outpost to travel to another one some distance away with a more powerful radio signal. Meanwhile, the crew of the Æther has problems of their own as they're forced to travel through an uncharted asteroid field. There are some gripping moments here, but apparently not enough for some viewers. I, however, was engrossed and entertained throughout.

Anna I was really surprised with the poor reviews after watching this, as I was also really taken by it. Clooney does very little wrong in my book, and I found his performance and character both intense and interesting. While we get a bit of insight into his character through flashbacks of his younger years, the reason behind the totality of his brokenness is still somewhat of a mystery. He knows his life will soon be over, so the decision to be the one to stay behind proves easy. When Iris appears, he's wholly unaware of both how to deal with her and what to do with her. Without language, both her mystery and vulnerability are heightened, and despite Augustine trying to keep her at arm's length, she finds her way into his heart and gives him something else to focus on besides his impending doom. The crew of the Æther are close in a way that people can only be when they literally can't get away from each other, and Dr. Sullivan is gearing up to give birth to a child she and Cmdr. Adewole conceived on the ship. I found both storylines to be solid on their own and good counterparts to each other. The Midnight Sky was a solid piece of work and hit me emotionally. Maybe many disagree, but that's where it landed for me.

Glen Clooney totally abandons his typical suave persona in favor of gravitas. His handsome face is covered by a bushy beard and the twinkle in his eye replaced by a weariness that's palpable. His usually spry comportment looks slowed and pained. As for newcomer Caoilinn Springall, she's utterly precious, and Clooney gets a great performance out of the 7-year-old. Though the Æther subplot is secondary, there's still a lot of drama going on there, especially as Earth's fate becomes clearer. The crew members have family there, after all, and options and hope are both in scant supply. This isn't as effective as, say, Gravity (2013), which also starred Clooney, Interstellar (2014), or even Ad Astra (2019), which was also accused of being too slow, but I found it wholly worth watching.

Anna Clooney definitely shows his skills as an actor here, and I agree that Springall is nothing short of totally adorable. Her big blue eyes and cherubic face draw you in, and even though she only has one line as part of a dream sequence, her acting is fantastic. She's just someone you want to care about and can see even a gruff-hearted loner like Augustine falling for. Between space and the Arctic, the landscape of this film is harsh and beautiful, from visually arresting shots of the Æther crew as they work to repair their ship during a spacewalk to Augustine and Iris wandering snowblind through the harshest conditions Earth has to offer. Maybe it isn't everyone's cup of tea, and perhaps I can appreciate a slow plotline more than many, but for me The Midnight Sky had everything needed to stay fully engaged—it's definitely worth checking out of Netflix. Δ