Cori Meichtry is a mother of two and a longtime middle school teacher for the Lucia Mar Unified School District. You can imagine that when it comes to managing kids, she’s pretty confident.

When Meichtry became pregnant with her third child, her doctor asked her and her husband Brian if they’d like to join a Cal Poly study called Healthy Beginnings, focusing on fitness in pregnant and postpartum mothers, as well as their partners.

Meichtry said yes and, rather quickly, learned that her way wasn’t always the right way.

“With my previous two, I really wasn’t concerned about being healthy during the pregnancy,” she said. “Ever since I’ve joined this study, though, I realized that attitude wasn’t right. It’s been eight weeks, and this is the best I’ve felt and the most fit I’ve been in all my pregnancies.”

Meichtry—who joined Healthy Beginnings at Week 12—is now 20 weeks pregnant. She said that though her belly has grown, she hasn’t gained any weight since Week 12.

“There is this antiquated idea that pregnancy is the time that women can freely gain weight because they’re eating for two,” Phelan said. “That’s absolutely untrue, and it’s dangerous.” 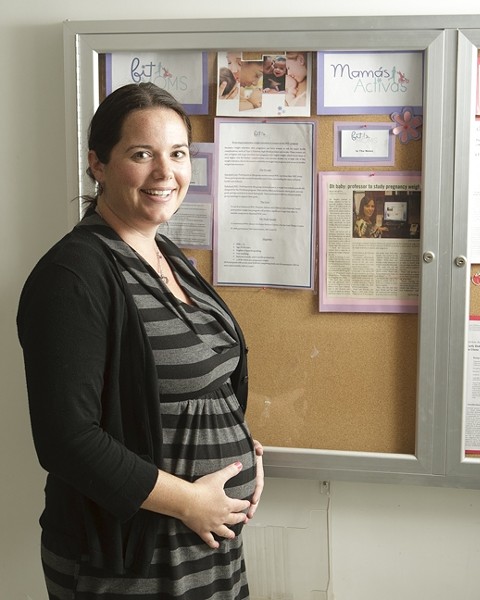 Phelan and Hagobian, colleagues at the Cal Poly kinesiology department, are currently leading twin studies called Healthy Beginnings and Healthy Beginnings in Partners. The studies seek to assess the impact of lifestyle interventions on the health and fitness of pregnant and postpartum mothers, as well as their partners.

“We like to think of pregnancy as a teachable moment for mothers and their partners,” Hagobian said. “It’s an important time to potentially make a lifestyle change for themselves and for their baby.”

For one participant group—the health promotion program—that intervention consists of the pregnant mother meeting with a counselor and educational materials sent in the mail every two months.

Hagobian and Phelan hope that both groups will develop healthier lifestyles and regulate their weight appropriately, but their hypothesis is that those who receive the multi-component intervention will accomplish those goals more effectively. 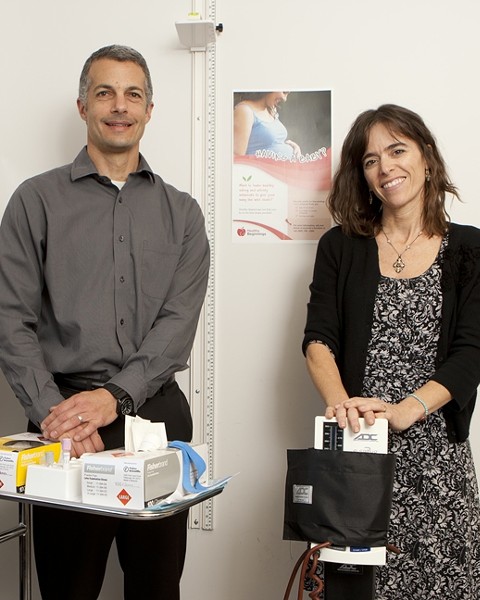 “Right now, there are so many ... messages that aren’t getting out about health during pregnancy,” Phelan said. “Amazingly, only 46 percent of OBGYNs are even telling their patients how much weight they should gain during pregnancy.”

Hagobian added that many of the unhealthy behaviors that mothers can unwittingly engage in during pregnancy tend to rub off on their partners, and some traits can be passed down to their babies as well.

“Eating levels and activity levels can change, but both partners need to be as healthy and active as they can be,” Hagobian said. “Excessive weight gain is a problem for many reasons.”

Hagobian and Phelan are well aware that societal stigmas surrounding both pregnancy and obesity are firmly entrenched, and they said that overcoming trepidation from medical professionals and potential study subjects has been one of the most challenging parts of their research.

“Everyone is interested in weight, and people tend to have very strong beliefs,” Hagobian said. “I think the biggest misconception is that obesity or weight gain has one simple answer or solution; it’s really quite complex and multi-faceted.”

Phelan and Hagobian are also quick to point out that they are not promoting starving, dangerous dieting, or even weight loss among pregnant women or among their partners—simply healthier choices and a more active lifestyle.

“We initially thought that people would be aghast about using meal replacements [fortified shakes or specifically chosen frozen dinners in lieu of normal meals] with pregnant women, but once attitudes have shifted, people have been much more open to it,” Phelan said.

Hagobian’s study has just started, and Phelan’s study is in year three. Both are still in the process of recruiting participants for their program, which they say is challenging but progressing steadily.

In addition to receiving free educational materials and nutritional counseling sessions, participants are paid for their completion of both studies.

“I’ve never had such thorough resources given to me during pregnancy,” Meichtry said. “I feel much better, and my family and I are making more conscious choices now.”