The mind is its own place

Accurately describing Bizarro fiction is more difficult than landing a leprechaun-manned time machine in Paradise Garden, but less difficult than fending off an assault from thousands of flying sharks. Both are scenarios in Cameron Pierce’s Shark Hunting in Paradise Garden, released by Bizarro publisher Eraserhead Press in 2008. Within a genre that Pierce calls “the literary equivalent of the cult section of the movie store” his book has been hailed as among the strangest. But at the same time, it’s a deliberate and action-packed religious satire that manages to make its point while you’re still coming to grips with the fact that the protagonist is an asshole who possesses the seemingly useless powers of transforming himself into a giant toad, and objects and people into mannequins.

“A lot of people who want to be writers think ‘you can’t do that’ or ‘you can’t say that with a title’ and a lot of bizarre writers do do that and do it very well,” said Pierce, who is hoping for an October release for his next Bizarro book. The Ass Goblins of Auschwitz is set in a version of the Nazi death camp where ass-goblins imprison children and force them to make toys and the protagonist is a conjoined twin. Gratifyingly, and somewhat surprisingly, the Bizarro community hasn’t faced a great deal of censorship.

Compared to a book that pairs Auschwitz and ass-goblins, Shark Hunting might sound positively demure, but Bizarro publishers are very few and very selective. The recent Portland transplant (by way of Olympia, Washington) first stumbled across the genre several years back. At the time, he was actively writing, but struggled to identify a literary home for himself, his influences being horror authors, Dada, the surrealists. Then, when he was 15, The Dream People, an online zine with Bizarro content, published one of Pierce’s short stories. The author now had an artistic home. In subsequent years his shorter works were published by such absurdist, surreal, and bizarre journals and zines as Bust Down the Doors and Eat All the Chickens, Bare Bone, The Horror Library Vol. II, Sein and Werden, and Avant-Garde for the New Millennium.

In 2006, Pierce met Rose O’Keefe, the editor of Eraserhead Press. He submitted an interview to the publisher, answering questions that ranged from his favorite authors and films to what he direction he wanted his writing to take to his fermented beverage of choice. (“A lot of bizarre meetings centralize around brew pubs,” Pierce said, by way of explaining the latter question) Then, he waited. After some time, the publisher notified him that Eraserhead was interested in his writing, and he submitted his manuscript to them as he wrote Shark Hunting.

“At the time, I wasn’t sure if they were just interested in developing me as a writer,” admitted Pierce. He wrote for about four months, from June to September of 2007 following several months of introductory outlining. The first draft he completed at the Cuesta College library, where he was a student between 2006 and 2007. He completed subsequent drafts in Olympia and Portland. And as it turned out, Eraserhead was interested in more than Pierce’s long-term talent, and his first book was released in conjunction with a new hard cider. 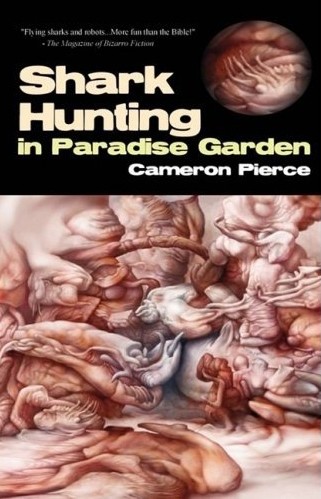 Pierce claims that he doesn’t recall where he got the idea to shipwreck a religious cult called Yahweh’s Dawn in the Garden of Eden. But he was curious to see what would happen if he confined a band of religious enthusiasts to the place from which their beliefs originated and then challenged them with the knowledge that everything they believed might be wrong.

“What I really like doing in fiction is creating surreal environments with people that really believe in something,” Pierce explained.

Throw in the fact that the surviving members of Yahweh’s Dawn (they crashed on their way into paradise, of course) include a being with a wizard head and lizard legs, a hunchbacked halfwit named Donkey, a birdman, Rattlesnake Doctor, and Sturgeon-wolf, and the first 50 pages are utter, confused chaos. In fact, on amazon.com, which features overwhelmingly auspicious reviews for the debut author (six out of the seven reviewers give the book five stars), the single critique is that the book commences so quickly and the characters are so oddly assembled that the reader is disoriented initially. Of course, so are Pierce’s characters who are immediately and repeatedly attacked by gangs of ludicrous flying sharks—ordinary species like great whites and hammerheads, of course, but feathered sharks as well, and strawberry and banana-skinned sharks.
“There are arm-length sharks wearing scuba gear. I call these scuba sharks. Then there are Christmas elf sharks, bottle-necked green sharks, elephant-faced sharks, leaf sharks, spider sharks with red hourglasses on their bellies, and even a shark with huge curly sideburns,” reads a passage of the book describing a battle between Vatican-trained robots and the unlikely flying-shark brigade. If Pierce can’t recall where the rest of the plot came from, the flying sharks, at least, make sense.

“I’m afraid of them,” he explained simply. “And I don’t think Jaws does them justice. I thought it would be fun to do something surreal with them, especially with sharks that don’t exist.”

Thus far, the response has been positive, both from friends and bizarre fans alike. Of course, Pierce points out, friends are unlikely to trash his work. Sales for Bizarro books can range from hundreds to thousands, and are often driven by recommendations from bloggers and specific bizarre-friendly sites. Pierce anticipates that bizarre literature will edge closer to the mainstream in the coming years, citing the fact that Bizarro literature, like mainstream literature, is heavily plot-driven. But he also acknowledges that some readers might be put off by the blatant strangeness.

To promote his book, Pierce began a series of performances (not quite readings) titled “Meat Magick” in which he delineates the plot from his tales using dead squid, fish heads, cardboard, pigs’ feet, Vienna sausages, and tin foil. Audience members are often splattered with meat, and the response has not been all that negative; even the few vegans present for past performances have reacted tolerantly. After all, the average reader is not accustomed to watching an author beat a dead squid with a vacuum cleaner. But isn’t that precisely the point? You have to wonder what imaginative feats a person who derives meaning from a five-foot tin-foil centipede and a fish head might be capable of.

From the melee Pierce manages to extract a glimpse of purpose, though not in the predictable, morality-is-black-and-white, happily-ever-after order of conclusions that have become so fashionable with mass audiences.

“The only thing that really matters is gone because I hoped for something better, because I took the same risk so many sorry bastards have taken before me,” philosophizes Ernest, the asshole protagonist. “If you’ve found something special, even if every last rotten fucker calls it trash, hold onto it with everything you’ve got. No paradise is worth the junk that quickens your heartbeat and fine tunes your brain to the sacred bells of religious awe. Mannequins could make angels out of me. I suppose they’re what you’d call my true religion.”

As for Pierce’s literary ambitions, they are few. He’d like to support himself financially with his writing. It’s not as difficult as people make it out to be, he insists, if you’re willing to lower your standard of living. And he doesn’t really have much of an alternative. Writing is the only profession that interests him and he’s situated in Portland, in the thick of Bizarro culture. He’s already raised standards of the bizarre with Shark Hunting; now it’s just a matter of seeing what he does with tyrannical ass goblins in his sophomore novel. ∆

Arts Editor Ashley Schwellenbach once splattered the wall with tuna, only because she was ill. Send tales of airborne meat to aschwellenbach@newtimesslo.com.