The Monday Clubhouse Conservancy is accepting applications for its annual Fine Arts Awards competition, which is open to youth artists of middle school and high school age in SLO County. The submission deadlines are in January and February 2020. Visit themondayclubslo.org for more information.

For the last 58 years, The Monday Clubhouse Conservancy has held an annual Fine Arts Awards competition to support young, local artists. But for its upcoming 59th year, the organization decided to try something new to raise funds for the cash-prize awards: a pop-up art show featuring 21 renowned local artists.

"It was by invitation only," Paula DeLay, the show's curator and one of the featured painters, told New Times of the artists involved with the pop-up. "What I wanted to do is have a rich, intriguing, very high-quality fine arts show." 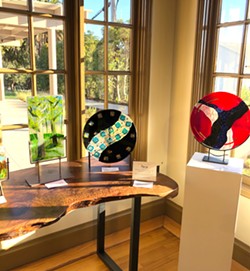 While the show was on display for just one weekend (Nov. 15 to 17) at The Monday Club, the space looked like it could have been a permanent exhibit. Despite how varied each of the artistic styles represented were, the flow from one artist to the next was seamless. Local artist David Limrite's striking black-and-white figurative pieces were immediately eye-catching upon entering the space. To balance his monochromatic and figurative style, DeLay chose to place her own works—colorful landscapes—to the right of Limrite's. On the left, another figurative artist gave a smooth transition to Limrite's work, while providing balance to DeLay's work with its equally bright color palette.

"A piece of art is beautiful by itself, but when you put it in a group, you have to respect each piece," DeLay said of her curation process. "It has to be very deliberate, but then the final product should seem so natural."

Hosted at The Monday Club, a building designed by pioneering female architect Julia Morgan (Morgan also famously designed Hearst Castle), the space itself added to the artistic ambiance of the exhibit. Natural light poured in the windows, illuminating bright glass pieces in one section of the historic building's exhibit. In another nook attached to the foyer, winning work from the last visual arts competition lined the walls.

Each artist represented at the pop-up gallery had agreed to donate 30 percent of their sales to the Fine Arts Awards fund, money that is then awarded to the winners of the annual competition. Some artists additionally opted to donate 100 percent of sales for certain works.

The competition is open to submissions from any junior or senior high school student in San Luis Obispo County, in both visual arts and music categories. The application deadline is in February, and six overall winners—first and second place in classical music, jazz, and visual arts—receive cash prizes as well as a chance to show their work and perform at an event. First-place winners receive $1,500, and second-place winners receive $1,000.

DeLay emphasized that the choice to limit submissions to junior and senior high school students is part an effort to support young artists who might be deciding between following more traditional pathways after they graduate high school and choosing to pursue the arts.

"They're saying, 'Do I want to go to college? What do I want to do with my career?'" she said. "We thought it would be very important that at that juncture in their lives we say, 'Here's some money to help, whether it's buying a new instrument, taking some singing lessons, or buying some art supplies.'"

After the weekend pop-up came to a close, DeLay said the sales were overall "quite a financial success." By donating all or part of their sales to the fund, the featured artists are using their work to give back to the younger generation of the SLO County art community.

For some of the folks involved in the award over the years, it was truly a full-circle experience.

As for the choice in creating a one-weekend-only pop-up gallery, rather than a semi-permanent exhibition, DeLay said that she believes pop-ups allow for certain qualities that other art display options don't provide.

"Pop-ups are so accessible," she said. "Typically at a museum you have to pay. I don't like that. Art should be very accessible.

"And I love the pop-up because it's very dynamic," she added. "It keeps it fresh." Δ