In this fierce competition, the real winner is the audience! 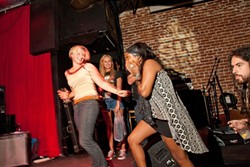 It’s Thursday, Aug. 29, and there’s a line down the block of people waiting to get into the Fifth Annual New Times Music Awards. Inside SLO Brew, the place is abuzz with energy, and when Fialta hits the stage a little after 7 p.m., they set the bar high for Best Live Performance.

With simplified instrumentation (Xylophone? Why not? Floor tom for percussion? Yep! Keyboards? Uh-huh!) and soaring harmony vocals, Fialta oozes sunny California fun. Their music is loaded with diverse textures, and their whole vibe is hipsterrific! Could the first band out of the gate win? It sure feels like it. 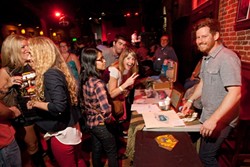 Next up, Taktical takes the stage. He’s got a DJ spinning tracks off to the side, so it’s just Cassidy Wright up there, moving around the stage and laying down rhymes. I can’t help but think he’s at a bit of a disadvantage since his whole performance rests on him. Even though his energy is high and his tracks are phat, he doesn’t seem to be able to eclipse Fialta’s performance.

The third act of the night is The Monroe, featuring Atascadero singer Morgan Monroe—a sprite, a pixie, but with a voice so lush, so gorgeous, it flattens the crowd! Her band is tight and lively, and she has total command on stage. Who is this woman and where did she come from? When her set’s over, I can’t help but think, “Well, that’s that. Best Live Performance for sure.” 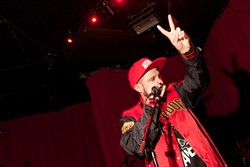 Of course, you can never discount Travis Warren, and when he gets up on stage, he rocks the house! His voice is a banshee in the best traditions of hard rock, and his time as front man for Blind Melon has given him the rock gestures, the style, and the confidence to perform before huge crowds. He’s awfully good, but at this point, my money’s still on The Monroe.

Then comes Vincent Bernardy, who frequently performs under the name St. Vincent Folk. His recordings—which, I should note, took home four Newties this year!—featured collaborations with a number of great female vocalists, including Jade Jackson, Emily Wryn, Rumer, and even Morgan Monroe—but none were available to perform with him tonight, and as good as he is and his songs are, I can’t help but feel he’s at a slight disadvantage. He’s rocking it—hell, every act on stage tonight is incredible—but I still have my money on The Monroe. 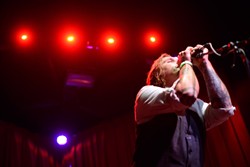 As the judges deliberate, Songwriter of the Year Dulcie Taylor serenades the crowd with her beautiful songs and lilting voice. What a night!

Finally, the judges speak, and they confirm my feelings: The Best Live Performance goes to Morgan Monroe! This young woman and this band, they’re going places!

And the winners are …

Album of the Year

The Monroe, “I’m Waiting On You to Say”

Vincent Bernardy, “Sweet It Is”

We Were Superheroes, “Triple”

We Were Superheroes, “You May Go”