Using the Matt Lauer sexual harassment scandal as a jumping-off point, The Morning Show looks at the lives of those responsible for creating a popular early morning news program that was recently rocked by the firing of longtime co-host Mitch Kessler (Steve Carell), a second-wave "victim" of the #MeToo movement. Co-host Alex Levy (Jennifer Aniston) knows her place on the program is tenuous, so in an attempt to force her network to keep her on, she preemptively announces that brash TV rewporter Bradley Jackson (Reese Witherspoon), who recently gained attention from a viral video, will be her new co-host. Backed into a corner, network President Fred Micklen (Tom Irwin) and corporate executive Cory Ellison (Billy Crudup) are forced to see where it all goes, with the TV show's executive producer, Chip Black (Mark Duplass), being played like a pawn between the powers that be. (10 60-min. episodes) 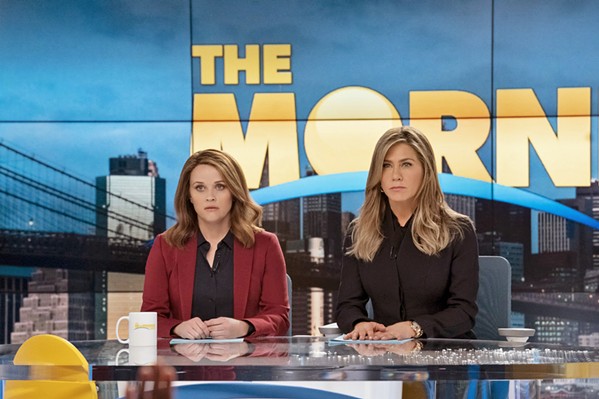 Glen If you're a fan of early morning news shows or if you dream of being a TV personality like Katie Couric, this TV series might very well cure you of those affinities. First of all, being a part of a show like this seems exhausting, no matter how good the money is. It's also a cutthroat business, embodied in Crudup's Machiavellian corporate killer, Cory, who takes absolute glee in throwing a monkey wrench into The Morning Show to up ratings. Aniston's Alex is hanging on for dear life, and she's both angry at Carell's Mitch for destroying their team and professional lives but also still sympathetic to him. The question is under whose watch was Mitch allowed to use his power to sexually harass young women working on the show? As the novice newcomer with a fierce sense of ethics, Witherspoon's Bradley is the loose cannon, who has the power to save the show or destroy it. There's also the side plot with assistant show booker Hannah Shoenfeld (Gugu Mbatha-Raw), one of Mitch's sexual conquests, as well as two other show colleagues—show meteorologist Yanko Flores (Néstor Carbonell) and production assistant Claire Conway (Bel Powley)—who are in a consensual sexual relationship even though their professional power imbalance makes their relationship inappropriate. The film covers contemporary issues from sexual harassment to corporate malfeasance to journalistic ethics, all while being thoroughly entertaining. It's a terrific show!

Anna Both Aniston and Witherspoon are powerhouses here, one siding a bit more with the old guard and one ready to take on every injustice in her reach. It can be tough to see beloved actors play the "bad guy," and Carrell elevates the character from simply a gross dude who uses his power and environment of toxic masculinity to get away with years of abuse to someone teetering right on the line of actually having us feel sympathetic toward him. He is frustrated that what he perceives as his slight indiscretions have become national news, vilifying him overnight when even bigger players like Dick Lundry (Martin Short) abuse and dehumanize women constantly with no consequences. This part of the story is certainly not fiction; the #MeToo movement left many men who grew up in our toxic, patriarchal society feeling attacked and thrown under the bus when their bad behavior was soon thrust into the spotlight and challenged. While Mitch's story is certainly a through line of this series, the focus is very much on the women who are left to pick up the pieces and who refuse to go down with the ship. They are the heart of this series.

Glen Mitch represents the utter astonishment that many men outed in the #MeToo scandal felt about their behavior. He couldn't recognize that what he did was wrong. He truly felt his sexual conquests were consensual. The power imbalance and his ability to advance or break careers simply weren't calculated in his reasoning. He couldn't recognize that a subordinate might feel obligated to bend to his sexual advancements, or that by refusing she might feel her job was in jeopardy. And when Mitch's wife leaves him, taking their two boys with her, he felt like he was the victim. As it slowly dawns on him that his career and fortune are at stake, he begins to look to spread the blame to those who worked with him, who he sees as enablers. The show gets to some surprisingly nuanced and complex elements of this national awakening to patriarchy. Like white privilege, men who enjoyed male privilege weren't aware of it until they saw it taken away, no longer protecting them from their bad behavior. Maybe the effect that the Black Lives Matter movement will have on white privilege will be the same that #MeToo has had on patriarchy. One can hope.

Anna Aniston takes on the role of Alex beautifully. She's in a sham marriage that was over years ago, but she can't bring herself to let the public know. She has a grown daughter who would much rather spend time with her mother than bask in her fame. Worst of all, her network is ready to replace her with a younger model. She's wily and cutthroat, a master at the game of chess laid in front of her. Witherspoon's Bradley is a spitfire whose quick temper has done her no favors professionally, that is until her rant sends her viral. The two women barely can stand one another at first, and while they remain in opposite camps in many ways, soon enough they are confronted with the reality that the only way to survive is to work together. It's not all that simple though, and these two strong characters are in constant battle. The cast is fantastic; you really can't go wrong with this much talent on screen. I'm excited for season 2! Δ