The Mother Corn Shuckers release their fourth album, All In

Originally, self-described "beergrass" band The Mother Corn Shuckers had planned to release their new album All In last summer, during what would have been the height of their touring season. Best laid plans, eh? Well, they held off for as long as they could and decided to finally pull the trigger. The album, their fourth, will be released on Friday, Jan. 22, and available on their Bandcamp page. You can also hear it on Spotify, see the band on their YouTube channel, and follow them on Facebook and Instagram @themothercornshuckers. 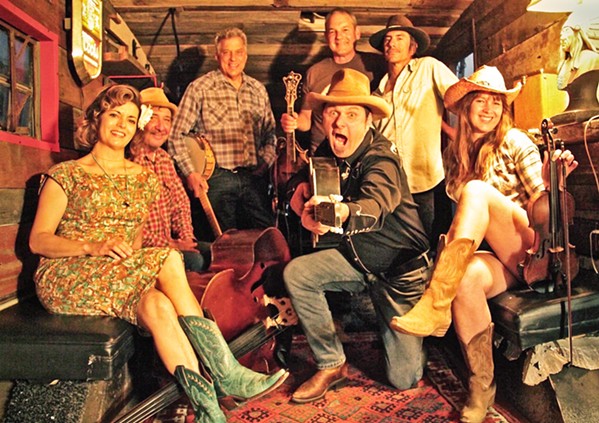 According to frontman and songwriter-in-chief Che Miller, they're "songs about love, loss, friends, fun, heartache, and murder."

The 12-song album kicks off with "Silver Spoon," which has the jangle of an early John Cougar song before he readopted his given name Mellencamp—a super catchy ditty about the perils of getting everything handed to you and learning to value nothing.

"Calling it Home" is a propulsive, galloping road song with a twist, about pulling a 35-foot trailer: "Shifting into low gear, hope I get out of here/ Ruts in the road, pulling a heavy load/ Going slow steady is the only way to go/ Getting off the mountain and getting back home."

"Tip of the Hat" is groover about hard partying through the night: "Sound so loud, lights so bright, everything is in sight/ One with you, one with me, everything is reality/ Sun will rise another day, wash the whole night away/ What you take with you, you see, is your new reality."

Miller's got a forceful voice and is backed by a small army of great players. In the past, they recorded their albums essentially "live"—throw everyone in a room and go for it. This is the first time they layered in multi tracks, and the sound is terrific! Recorded by Jon Bartel at his Northwall Studio in A-Town and mastered by Kirk MacLane at Portola Studios, you can distinctly hear all the instruments, vocals, and backing vocals.

"Fire Still Burns" starts as a forlorn lament before morphing into a boot-scooting boogie road song: "Late night highway trying to make it home/ Straight black coffee and the radio's on/ 600 miles to go on this lonely late night road/ 4 a.m. and the fire still burns."

The instrumental traditional "Lonesome Reel" is a real bluegrass barn burner that shows off the band's amazing picking and fiddling.

"Tradition" was cowritten with Miss Leo Mathews, who sings in duet with Miller, and it's a lovely and rustic love song: "High on the mountains we have crossed/ You take the lead when I get lost/ Take my hand and carry my load/ I'll take yours and welcome you home// If you my dear would give your permission/ I'd like to be your one tradition."

"Fork in the Road" is another groovy dance track that you can't help but bob your head to. You'll wish you were holding a tambourine. "I liked the way that she moved/ She liked the way that I grooved/ Her lips tender and sweet/ Kind of girl I'd like to meet."

"I thought you might especially like the track 'Cold Blood' considering I wrote it about the San Miguel massacre," Miller said in an email. "I know you've done a few articles on it."

The revved-up hard-charging "Cold Blood" tells the infamous story of the 1848 Reed Murders of San Miguel, when 11 people lost their lives and the perpetrators were eventually overtaken by a posse near Santa Barbara: "They headed south through Pismo/ Mr. Price was on their trail/ Caught up with them on the coast/ The posse gave them hell/ Some were shot and drown/ Trying to swim away with the gold/ Some were tried and put to bullet/ In Santa Barbara old."

"W. T. Sunday" stands for "White Trash Sunday," and it's got a real outlaw country feel: "Sunday morning and I feel like shit/ Gonna drink another beer gonna take another hit/ Head's still hurting and my body still aches/ Wish I had a shot of shine."

The album ends with the rumbling "Evidence," a crime story: "Shotgun shells/ finger prints/ Stolen money and a fender dent/ Bodies laid out all over the floor/ I think it's time to make a run for the door." The harmonica that sounds like a wailing siren is nice touch!

This is straight-up partying music. You'll be tearing up your living room carpet and dreaming of the next time you can see The Mother Corn Shuckers in their natural element, live and in person. Great record! Pick up a copy starting tomorrow on the band's Bandcamp page. It's worth getting a physical copy because it's got cool photos, lyrics, some liner notes, and the cover features a painting by Miller's wife and bass player, Colleen Gnos, the artist who did the Avila Beach lifeguard towers! This disc is local through and through! Δ