The Mother Hips brings their quintessential California sounds to SLO Brew on Nov. 21

In the 1960s and ’70s, one of California’s most creatively potent hotspots was Laurel Canyon, a Los Angeles neighborhood that became the epicenter for folk and rock performers such as Joni Mitchell; Jackson Browne; David Crosby; Stephen Stills, and Graham Nash; The Turtles; Mama Cass; The Byrds; Frank Zappa; Jim Morrison; and many others. The Mother Hips are a contemporary act that would have fit right into that scene, but it was before their time. 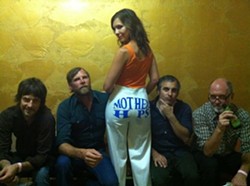 Instead, 23 years ago, The Mother Hips started as a party band from Chico who played for a rabid and growing pack of college kids. Tim Bluhm (vocals/guitar), Greg Loiacono (guitar/vocals), Isaac Parsons (bass), and Mike Wofchuck (drums) were college kids living off campus who jammed and played some parties and once billed themselves as Pippi Longstockings and the Trunk-of-Funk.

Parsons and Wofchuck eventually moved on to cover bands, but Bluhm and Loiacono stuck with their original songs, and the current lineup now includes John Hofer (drums) and Scott Thunes (bass). The band’s sound has evolved and morphed over the years, and today they’re more soulful, playful, and exploratory—brimming with creativity! They sound like they would have fit right in with Joni, Jackson, and the rest of the scene.

This year saw the release of the Hips’ ninth album, Chronicle Man, and they’ve been hitting the road to promote it, playing dates on the East Coast as well as a couple of shows in the Texas music capital of Austin. After they play SLO Brew, they do a couple of dates at the Great American Music Hall in San Francisco.

Bonus! They like SLO Town, so we get them in an intimate club. Look, we can’t travel back in time to sit in on a back porch session in Laurel Canyon, but the next best thing might be The Mother Hips at SLO Brew.

“California isn’t just a state,” Bluhm explained in press materials. “It’s a psychic idea ... the end of the frontier. It’s not just a place; it’s a style and a state of mind.” 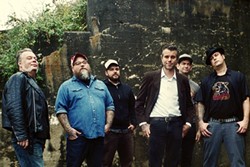 Also at SLO Brew this week, check out Memphis-based country punk rockers Lucero on Thursday, Nov. 20 (8 p.m.; all ages; $21 presale or $23 at the door). Everything you need to know about this band’s live show is right there on their new “Live From Bonnaroo” Spotify Session: raw, foot-stompin’ fun! Currently on their By the Seat of Our Pants nationwide tour, if you haven’t seen these guys, now’s the time. “Each person makes Lucero their own thing,” frontman Ben Nichols said in press materials. “Everyone identifies with us for completely different reasons. For one reason or another, Lucero becomes a very personal band.” The Dead Volts, SLO County’s own twangin’ and bangin’ guitar rockers, will open.

“Who’s Crying Now,” “Don’t Stop Believin’,” and “Open Arms” are a few of the classic Journey songs you’ll hear this Saturday, Nov. 22, when SLO Brew hosts Journey Unauthorized (7:30 p.m.; 21-and-older; $15 presale or $17 at the door), a band that bills itself as “an international pro concert tribute show that provides an amazing rendition of the 1980s Journey.”
Finally, on Sunday, Nov. 23, SLO Brew closes out their week with Minus the Bear (7:30 p.m.; all ages; $20), a Seattle-based indie rock group that started in 2001. The band—Jake Snider (vocals, guitar), Dave Knudson (guitar), Cory Murchy (bass), Alex Rose (synths, vocals), and Erin Tate (drums)—has released four albums and four EPs over their career, so there’s a pretty deep well of material they draw from for their live shows.

Come on, Cali! Don’t play her that way!

Lara Ruggles plays Songwriters at Play at the Shell Café in Pismo Beach this Thursday, Nov. 20 (6:30 p.m.; all ages). The Denver singer-songwriter’s last tour to the West Coast resulted in the theft of her and her boyfriend’s computers, camera gear, and clothing—stolen from their rental car in San Francisco mid-journey.

“I don’t think I realized how much our community was there for us until our stuff got stolen,” she said in an email. “It’s easy to get jaded when you’re just making enough to get you to the next show, and you’re like, is anyone really listening? Would anyone care if I just packed up and quit singing? But the way people responded [to the theft], that was my silver lining.”

Within a week of the theft, Lara and her boyfriend’s community had raised more than $4,000 in PayPal donations, and they were able to replace their computers when they returned home to Denver.

So, what the heck? She’s back. Don’t steal her stuff this time, bro! She’s got an expressive voice and plays lovely and sparse guitar and piano to accompany herself. Her debut full-length album, Cynics and Saints, is due in early 2015.

A couple of years ago, in 2012, I missed a great event at Steynberg Gallery that people were buzzing about afterwards, and now it’s here again. Called An evening of Middle Eastern Tribal Fusion Dance and Music plus Visual Art, it presents dance and art by Adelaide Marcus with live music created by Timo Beckwith, Andrew Wise, and Daniel Cimo this Friday, Nov. 21 (art viewing at 7 p.m.; show at 8 p.m.; $12 donation requested at the door).

“Adelaide Marcus is simply incredible to watch!” Timo Beckwith said. “Her movement is so full of passionate expression that’s completely integrated and precisely controlled in every motion and in every tiny part of her body. I’ve been working with some video of her in silhouette and everyone who’s seen it is both enthralled and completely blown away.”

According to organizers, “This is an opportunity to see one of the premier movement performance artists on the West Coast. She will also be showing her paintings and prints, so come early to take a leisurely look at her art. One of her works was recently the winner of a contest that reproduced it on a highly visible full-scale billboard in San Francisco. Adelaide is an amazingly eclectic artist, dancer, circus performer, fire spinner, hooper, stilt walker, filmmaker, contortionist, singer, and rapper.”

The Cuesta College Jazz Orchestra plays Friday, Nov. 21, at 7:30 p.m. in the CPAC. The concert pays tribute to the great composer and arranger Sammy Nestico and will showcase several soloists from the Jazz Orchestra. Call 546-3198 for ticket info or purchase online at cpactickets.cuesta.edu.

Cal Poly’s newest student a cappella ensemble That’s the Key performs its first concerts of the academic year on Friday, Nov. 21 (6 p.m.), and Saturday, Nov. 22 (2 p.m.), in Room 218 in the Davidson Music Center (Building 45) on campus. Called “That’s the (tur)Key,” the concerts will celebrate the Thanksgiving holiday. Admission at the door is $5.

The Cal Poly Arab Music Ensemble plays on Saturday, Nov. 22, joined by the Zaryab Ensemble, Ballet Theatre San Luis Obispo, and other guest artists during its Fall Concert at 8 p.m. in Harman Hall of the Performing Arts Center. Expect music and dance from Egypt, Lebanon, Iran, and the extended region. Tickets are $12 and $14 for the public and $9 and $12 for senior citizens and students (756-4849).

The 45-voice Cuesta Master Chorale Chamber Choir and Orchestra perform Franz Joseph Haydn’s masterwork “The Creation” at 7:30 p.m. on Saturday, Nov. 22, in the CPAC. Call 546-3198 for ticket info or purchase online at cpactickets.cuesta.edu. The concert will be repeated on Sunday, Nov. 23, at 2:30 p.m. in Mission San Miguel, with tickets sold at the door.

Nearly 300 students will perform at Cal Poly’s annual Bandfest at 3 p.m. Sunday, Nov. 23, in Harman Hall in the Performing Arts Center’s Christopher Cohan Center. Hear Cal Poly’s Wind Orchestra, Wind Ensemble, and the Mustang Marching Band. Tickets are $12 and $14 for the public and $9 and $12 for senior citizens and students (756-4849). 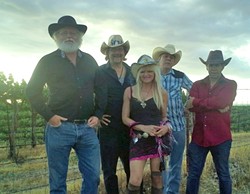 Fighting Chance used to play around here all the time, mixing punk, rock, and reggae with introspective lyrics. “We like to think [we’re like] The Clash without the social fervor, but we’re just not that cool,” joked band member Ryan East. They do put on a kick-ass live show, but they disappeared for a while. “We haven’t played the coast in three years, and we’re happy to get back to having some fun and reconnecting with our fans and our roots here.” See them at Mongo’s Saloon this Saturday, Nov. 22 (9 p.m.; 21- and older).

“Just a note to inform the listening audiences of the Central Coast that Acoustic TRAXX will be back at The Dish Restaurant (835 13th St. in rockin’ Paso Robles) this Saturday, Nov. 22, and Sunday, Nov. 30, from 7 to 10 p.m.,” wrote singer-guitarist John David Krause, whose bandmates include Carol Ann Fernandez (vocals-bass-guitar) and Vince James (vocals-keys-guitar-banjo). “We may not have water in North County, but we have music! Billy Joel, Dylan, Lennon, Cash, Dr. Hook, John Prine, Eagles! All the good shit! Not to mention the heartfelt, country-style songs of me, John David Krause! Come on by to hear it all!”