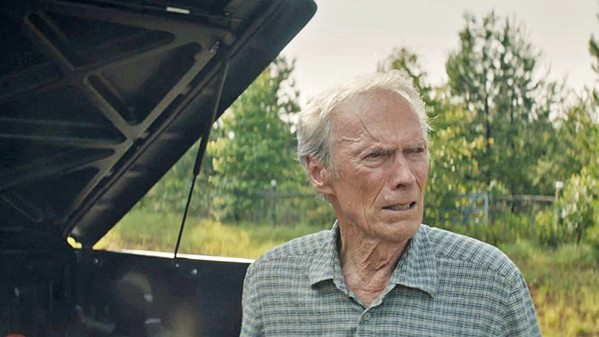 Glen After a quick read of the New York Times Magazine article upon which this film is based, it's pretty clear that instead of focusing—as the article does—on whether or not Earl Stone was a crafty insider or a doddering old man taken advantage of by the cartel, this film is more interested in inventing Stone's estrangement from his family. Earl wants to be the center of attention, and he's seen as a star of the daylily growers association and well liked at the local VFW hall, rather than feeling like a failure as a husband and father at home. He misses anniversaries, birthdays, weddings—you name it—and his ex-wife, Mary (Dianne Wiest), and daughter, Iris (real life daughter Alison Eastwood), hate him for it. About the only family member who's not yet fed up with his selfishness is soon-to-be-married granddaughter Ginny (Taissa Farmiga). His horticulture operation, having fallen on hard times thanks to the Internet, is out of business, so when he's recruited to drive a route for the cartel, he accepts, thinking it'll be a one-time easy money scheme that will help him pay for his granddaughter's wedding. It is easy money ... too easy, and the one-time trip turns into another and another, with increasingly larger loads and fatter paydays. Earl's a charming, selfish prick, and the film explores—maybe a little too easily and conveniently—how he comes to realize what's really important in life. It's not nearly as good as Gran Torino (2008), a similarly themed film, but it certainly washes the bad taste of his last failure—The 15:17 to Paris (2018)—out of my mouth.

Anna I skipped his last film, and from what I hear I did myself a favor. Eastwood's direction, however, has impressed me in the past, especially with films like Unforgiven, Gran Torino, and Sully, with some of his less memorable films falling by the wayside. The Mule lands somewhere squarely in the middle for me personally, some of the broader strokes fighting with the nuance of characters. In the first few minutes of the film, we watch Iris pace back in forth in her wedding dress while her mother, fiancé, and young daughter look on. Earl hasn't shown up to give her away, something by the sound of Mary's apologies is wholly predictable yet heart-crushing to Iris and causes a rift that lasts for more than 12 years when her daughter, Ginny, is getting married. While Earl seems like a grouchy but also charming and amiable guy to the world around him, those he should be closest to get the least attention. It's hard not to be infuriated watching him buy a different wedding party and bar full of people a round, while simultaneously missing his only daughter's big day. What a jerk! With his inability to change and general hatred of new technology, Earl is unwilling and unable to evolve his flower farm business model to keep up with the times, and soon he's penniless, driving around his beat-up old truck and looking for his next gig. His traffic ticketless past and unlikely appearance as a mule means that things go a lot smoother for him than many mules. The old white guys in middle America law enforcement don't get a whiff of trouble when encountering Earl, and his ability to think on his feet saves him more than once. I wouldn't call it a thrill ride, but it's entertaining nonetheless. Eastwood has pulled it off one more time. 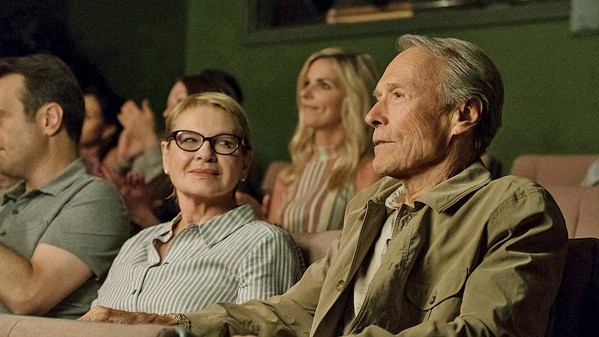 Glen Eastwood has pulled it off, but it's a little repetitive of his past work. Like Gran Torino's cranky, racist veteran Walt Kowalski, Earl Stone is mostly blind to his own shortcomings. Hispanics are "beaners," blacks are "negroes," and women are gleefully objectified. Stone gets away with it all because he's old, but also because he's not malignant or malicious about it. He just doesn't seem to know any better. His law enforcement counterpart is new Chicago bureau DEA Special Agent Colin Bates (Bradley Cooper), who, with his DEA partner (Michael Peña), is zeroing in on the cartel operation because they flipped low-level cartel worker Luis Rocha (Eugene Cordero), who tells them all about this successful new mule, Tata, who's now driving a new black pickup truck. Yet, even when Tata—aka Earl Stone—is right under the DEA's noses, his age and amiable nature rules him out as a suspect. Overall, this is an ambling film that occasionally delivers moments of emotional resonance. Eastwood is 88 years old, and the former hunky lead is comfortable in his skin, gifted behind and in front of the camera, and still capable of crafting an entertaining story. The Mule will be remembered as an effective late-career effort from a masterful filmmaker who's given us classics such as The Outlaw Josey Wales, Pale Rider, Mystic River, Flags of Our Fathers, Letters from Iwo Jima, and American Sniper. For me, his amazing oeuvre is enough to erase his 2012 RNC speech to an empty chair.

Anna Ah, the chair. That was a pretty cringe-y moment to watch, one not soon forgotten. I try to let filmmaking and politics have separate zones in my brain, and while I don't think Eastwood and I would get along too well socially, I admire his lifetime of work both in front of and behind the camera. He's a star I've been watching all of my life, and someone who impressively continues to create when many others his age have settled into retirement. Cooper and Peña's work in the film is solid, too, the slow build of a partnership coming together as the case takes shape. Part of the fun is seeing how close the two come in contact with Earl, Bates actually having not one but two conversations with Earl as they hunt for the elusive Tata. The film isn't groundbreaking or anything particularly out of Eastwood's wheelhouse—as you said, this character and Gran Torino's Walt are cut from the same cloth, though Earl seems to be a watered down version of the old grump. Yet it's many things that a film should be and an interesting rendition of a story I hadn't heard of. It's worth an afternoon at the theater, if this genre and director are up your alley. Δ