The nature of the breast

Local women nourish each other with breastfeeding encouragement

Talking about breasts right around Mardi Gras is almost a no-brainer. The two go together like milk and cookies.

On Feb. 10, a group of women got together to discuss that very topic: breasts. They weren't trading tips on the best ways to get shiny plastic beads, however, they were sharing advice and information as part of a monthly meeting of La Leche League of San Luis Obispo. 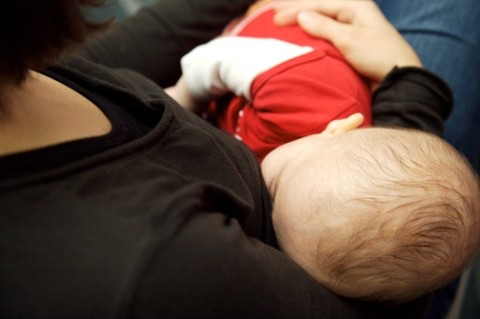 In light of the upcoming Fat Tuesday-inspired nudity crackdown, Christine Silva, a La Leche League leader in San Luis Obispo, is confident that nobody would ever try to apply such an ordinance to limit the right of a mother to breastfeed her child. California Civil Code, she pointed out, allows for women to breastfeed their kids just about anywhere. San Luis Obispo's Municipal Code also makes an allowance for nursing mothers amid restrictions on exposing breasts and more in city limits.

"Among the mothers I have heard from and worked with through La Leche League, I have never heard of any attempt to prevent a mother from exercising her right to breastfeed in a public or private location in San Luis Obispo," Silva wrote in an e-mail. "In fact, San Luis Obispo and San Luis Obispo County are generally considered to be very breastfeeding friendly.

"That said," she continued, "many mothers do sometimes feel nervous about breastfeeding in public and choose to do so as discreetly as possible."

Lisa Jouet, a mother who attended the Feb. 10 meeting, said that the first time she publicly nursed with a friend was in Mission Plaza in San Luis Obispo. Her initial forays, she said, prompted her to wear a cover, but she's since stopped worrying.

"I used to be shy about it, but now she needs to eat," she said. "I just nurse anywhere."

"When I was pregnant, just talking with some people and reading it seemed like the norm wasn't to breastfeed any more," said Mary Knudson, who also attended the meeting. "But in San Luis Obispo County, it seems like everybody's breastfeeding."

In contrast, several of the women shared stories from other areas. Cindy Konrad, attending the local meeting for the first time, said that she was in New York over the holidays. While there, she attended a party at which there were other mothers of infants but she was the only one who breastfed at the get-together.

Flo Oakes, a mother of two who used to live in Tennessee, said that public breastfeeding wasn't as visible there.

In San Luis Obispo, she explained, she sees women breastfeeding at the library, in restaurants, in stores, and elsewhere.

Knudson theorized that San Luis Obispo might be so welcoming to breastfeeders because locals are aware of the health and other benefits of breastfeeding over formula feeding.

"We're really fortunate in this area, because our medical community is very supportive of breastfeeding," said Laura Sanchez, another La Leche League leader.

The women agreed that the support they receive from family, friends, the league, and an understanding public makes it easy for them to feed their children without fear. Oakes shared that breastfeeding moms may feel like giving up on the endeavor without such support.

And they can breathe easy when it comes to exposing themselves at feeding time.

"Breastfeeding is nourishing a child," Silva wrote, "it is not sexual or indecent."

La Leche League of San Luis Obispo holds Mother's Group Meetings the second Monday of each month from 10 to 11 a.m. in the Boydsen Room in St. Stephen's Episcopal Church in San Luis Obispo (1344 Nipomo St.). The meetings are open to mothers, expectant mothers, and children. Membership in the league is optional, costs $40, and includes receiving New Beginnings, a bimonthly parenting journal. For more information about the group or for breastfeeding-related questions or help call Christine Silva at 489-9128 or Laura Sanchez at 785-9515. You can also visit www.lllusa.org/web/SanLuisObispoCA.html or www.lalecheleague.org.