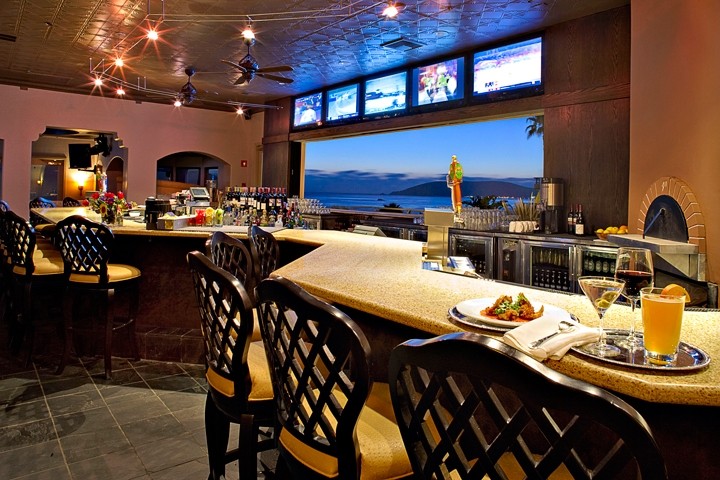 I saw John King at the Cliffs Resort last weekend and he couldn’t have been more pleased as he told me about his hotel’s new bar and lounge. King has given it the ultimate makeover and it’s well worth checking out. The re-designed bar and lounge in his resort along the cliffs of Shell Beach is like any club scene you would find in Las Vegas or Los Angeles.

The Cliffs Resort is one of the Boutique Hotel Collection owned by King Ventures, which includes several other local resorts. The Cliffs’ old bar was sorely in need of a redux and they spared no expense in redesigning the bar and lounge. They tore out the antiquated U-shaped bar (the elephant in the room) and that really opened the place up. Now when you walk inside, the first thing you spot is the Pacific Ocean backdrop. You can choose to sit inside the urban bar or go alfresco on the sun-swept, wraparound patio. Either place, you’re privy to spectacular views of the azure Pacific Ocean.

I’ve always loved the palms along the multi-level dining areas on the sunny deck, which give it a tropical ambiance. But there are plenty of attractions to lure you inside. The bar has no less than eight big screen TVs with the latest sports. You still have the ocean view, and when they open the picture windows behind the bartender’s station, you can feel the cool ocean breeze. With the windows open, especially when they’re busy, the bartenders can serve guests sitting on stools along the bar section that’s outside.

New amber-colored “ostrich leather” stools and booths offer cozy seating in the lounge. The oversized, comfy booths, the backs of which curve and rise toward the ceiling, are great for couples or a small party of friends. Best of all, a new oak-fired pizza oven has been added to serve custom pizzas and other treats, with daily specials posted on a chalk board on the pizza oven.

This is one bar and lounge where the food actually appeals to me: the new upscale bar menu isn’t prepared by untrained cooks using the microwave to melt cheese on stale corn chips topped with salsa out of a can. Chef Gregg Wangard is concerned about being green and personally shops at the Templeton Farmers Market every week. He prefers organic and sustainably grown vegetables and fruit freshly harvested from local fields, beef and lamb from our ranchers, and line-caught fish from along the SLO County coastline.

“Consumers are more educated about green issues,” Wangard explained. “They want to know where the food came from and how it translates to the cuisine.”

The Cliffs’ bar and lounge has been a favorite among San Luis Obispans of all ages since it opened, and that was in 1987. There’s a good reason—it offers something for everyone and every age. It’s a social club, a romantic getaway for a tete-a-tete when you want to impress a date, and a trendy place for lunch or dinner with its new upscale bar menu. Once a month they feature live entertainment for listening or dancing. The large glass doors with wrought iron grapevines between the dining room and the lounge open to turn the place into one big concert hall.

The well chosen wine list by Food and Beverage Director Chanell Hartman offers more than 300 varieties perfectly suited for the upscale dishes. She brings in gems from the Central Coast’s finest wineries, with good choices from Spain, South America, and South Africa, all reasonably priced. This is one bar scene where you can mingle with friends and enjoy fine beverages and a great menu, all of which make the Cliffs Resort decidedly upscale.

When it comes to dining out lately, it’s a buyer’s market. While that isn’t the best situation for keeping our local restaurants in the black, you can keep them in business by taking advantage of the good deals they’re offering.

At Palazzo Giuseppe’s in SLO and Giuseppe’s in Pismo Beach, they’re offering family night dinners on Sundays, Mondays, and Tuesdays. You get a choice of soup or salad and pasta, chicken Parmigiana, housemade meatballs, and sausage and peppers, housemade bread, and a cannoli for dessert. Not too shabby for a multi-course meal that’s only $20 per adult, $8 per child. Do try Joe DiFronzo’s fine Syrah that’s offered by the glass or bottle.

At SeaVenture in Pismo Beach, they’re offering a March Savings Menu with two courses for $28 and three courses for $34. It’s a full menu of selections with first, second, and third courses, including choices like clam chowder or winter chicory salad, grilled T-bone pork chop or New Orleans seafood jambalaya, and chocolate bread pudding or crème brulee. There’s much more and there are some items that must be shared by two people: lobster tail with drawn butter and two sides; and bananas Foster over buttermilk vanilla ice cream. They also feature a well chosen wine list with many great local wines, also available by the glass.

And this is the time of year when the popular Del’s Famous Pizzeria and Italian restaurant in Shell Beach celebrates their anniversary, an impressive 36 years this month. Each week in March features a dinner special at value prices— such as any calzone for $6.99 through March 14, followed by spaghetti with meatballs for $5.99 from March 15-21, and a large pizza with two toppings for $10.99 from March 22-31. They also offer good local wines at reasonable prices. With deals like these, we can all afford to eat out in SLO County more often. ∆

You can reach New Times Cuisine columnist at khardesty@newtimesslo.com.