"Boldly go where no one has gone before.”

This is the lesson that Star Trek has ingrained into the hearts of many fans, including technological innovators like Jake Rubin.

Rubin, once a 20-year-old college dropout, wandered into Bob Crockett’s office with something almost too bold to become a reality. 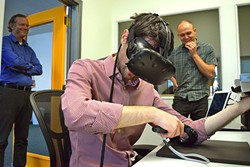 “My first thought is that he’s absolutely crazy,” Crockett said.

Rubin wanted to make virtual reality fully immersive (especially for the tactile capabilities). Crockett shed his layer of skepticism when it became apparent that the technology of virtual reality wasn’t light years away, but could be now.

Three and a half years later, that fantasy transformed into a reality-creating enterprise called AxonVR—of which Rubin is the founder and CEO.

And it seemed like San Luis Obispo is the perfect place to start a company that needs that math-y, brainy stuff: Already teaching biomedical engineering at Cal Poly, Crockett—AxonVR co-founder and lead engineer—knew that utilizing the plethora of engineering students from there would be ideal for what they wanted to produce.

“They are young, energetic, and want to change the world,” Crockett said, “but they’re also very, very professional.”

So, the startup stationed its engineering headquarters at a quaint office in town.

Joe Marino found his way from Cal Poly into the company that’s searching out the fringe of virtual technology.

His desk is very visible: There are no cubicle walls, only standing desks, warm green paint on the walls, and a lone Teenage Mutant Ninja Turtle balloon is floating in the office space on a recent weekday.

“I’m the type of person that likes to overhear conversations and jump in, so it works very well,” Marino said.

Ke Kai Kealoha bursts into laughter from behind the front desk. He peers over at her and smiles, “She’s laughing because she knows that it’s true.”

Virtual reality (VR) technology has already been used for various video games and even for therapeutic purposes. However, this technological revolution is still early in its rise.

“There are a lot of different VR companies working on pieces of the puzzle,” Rubin explained, “but no one else we know of is working on the whole shebang.”

There are five senses responsible for our understanding of the world. So far sight and hearing are the only two covered in the VR industry; Rubin’s company is looking to fill in the rest, starting with touch.

One of the company’s products includes “AxonSkin,” a material engineered for tactile and thermal feedback that will be used to create the AxonSuit—still to come.

Engineers around the office are enveloped in AxonVR projects of their own: using their independence and ingenuity to create their own piece of the whole, but “no one feels like a cog in a wheel,” Marino said.

As Marino put it, people working at a startup must wear many hats. There are no boundaries from desks or people, allowing for an equally innovative work environment.

The company has new demonstrations available and is now in the midst of fundraising, according to Rubin.

AxonVR will be making an appearance at Cal Poly’s Startup Career Fair on April 21. If you want to check out what’s in the works, visit axonvr.com.

Pacific Wildlife Care, a nonprofit wildlife rehabilitation center in Morro Bay, is getting up to $75,000 in matching funds for any new or increased donations received by the organization before the end of 2016. New donors or donors who lapsed in giving funds last year will receive a 100 percent match, and any donor who increases their dues or the amount they donate over last year will see that increase matched in kind. Donations can be made at pacificwildlifecare.org or mailed to P.O. Box 1134, Morro Bay, 93443.