Over the past few weeks, I’ve enjoyed three delightful meals at Lido in Dolphin Bay Resort in Shell Beach, each of which showcased the talent and passion of chef Brian Collins. Collins took over the executive chef position when chef Evan Treadwell left last summer. I first met him when he was sous chef to Treadwell and pastry chef Benjie Puga when Lido opened in 2007. Collins carries an impressive résumé, and as soon as I heard he was the new lead chef at Lido, I knew his passion for rustic French and Italian cuisine would shine on his new menu. 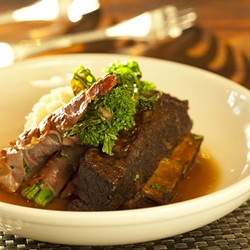 The starters, which Collins once told me were his strong point, are fabulous. You must try the plump little Cayucos abalone paired with crispy pork belly, dressed with brown butter, ginger, hollandaise, Meyer lemon, and avocado ($22). It’s impressive. The perfect blend of flavors and textures made me feel selfishly reluctant about sharing it with my husband, Dan. Collins’ dish of Rutiz Farm baby artichokes, braised then roasted and scattered atop Puga’s housemade sourdough covered with ultra-creamy burrata cheese ($13), was amazing. I’ve craved it ever since. Both dishes married beautifully with the Curran 2010 Grenache Blanc ($30/bottle).

Not unexpectedly, Collins’ career seems to have started when he was a kid. Inspired by his mother’s copy of the Chez Panisse Cookbook, after graduating from Arroyo Grande High School, the young dreamer signed on at the California Culinary Academy in San Francisco. He had just started classes when he visited Berkeley and knocked at the kitchen door of Chez Panisse. 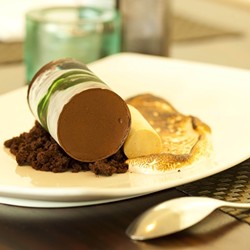 “Right when I walked in, the smell was so good I thought, ‘What are they cooking?’” Collins recalled. “Chef Gilbert Pilgram gave me an intern position (unpaid for the experience), and the first day I worked there Alice Waters walked into the kitchen. She was a visionary who knew exactly how she wanted her food to look and taste.”

After graduating from the academy in 2000, he was hired at Chez Panisse. Over the next five years, Collins worked his way up to become lead line chef at the world renowned restaurant.

Following that auspicious beginning, he returned home to the Central Coast and extended his education working for our best local chefs. I remember the news spreading like wildfire when chef Pandee Pearson, then executive chef at Windows on the Water in Morro Bay, hired Collins as sous chef in 2006. He worked there one year and then was hired by Treadwell as sous chef to open Lido. Two years later, Collins moved again, hired by chef Clark Staub at Full of Life Flatbread in Los Alamos. It behooves young chefs to work in various kitchens to sharpen their skills and their palates.

“Flatbread was so different in its setting and location, and we were focused on what I learned at Chez Panisse,” Collins recalled. ”We had time to work on seasonal ingredients from the farmers’ markets and make wine-friendly, rustic foods. Clark and I would compete on making dishes. Flatbread was a little oasis out in the middle of nowhere.”

Three years later, Treadwell called Collins, inviting him to take over his position at Lido. It’s one of the most noteworthy restaurants on the south Central Coast (as is the Dolphin Bay Resort), and Collins admitted he felt ready. After 11 years of cooking professionally, he knew it was the right fit. But like every other big name chef around SLO County, no one simply slips into the kitchen; staff changes are inevitable. Collins knew Lido’s kitchen well, but he credits their classically trained pastry chef Benjie Puga for being the rock of the kitchen. Puga knows every station and has often taken over as interim chef. Now the duo is working together to build a solid kitchen team, replacing staff that no longer fit in.

“I’m looking for creative individuals who are food lovers,” Collins explained, “and hiring people who want to be future sous chefs and chefs.”

There were some dishes I didn’t love, which doesn’t imply they weren’t good, just not my preference (if only the wannabe critics on Yelp understood this). The beef carpaccio ($16) was impressive, but I didn’t like the crispy shoe-string fries inside the rolls of beef, so I enjoyed them separately. The quail entrée ($26), one of my all-time favorite game dishes, was grilled, but now it’s fried—and that appealed more to my husband than to me. I thoroughly enjoyed the rustic Shell Beach bouillabaisse with Santa Barbara mussels, local rockfish, scallops, shrimp, and clams in saffron broth with a crispy, giant crouton topped with spicy rouille ($34). At brunch, the Dungeness crab and Hawaiian shrimp on angel hair pasta with basil, garlic, and beurre blanc ($14) was decadent yet irresistible. And no local restaurant makes better omelets, like their Dungeness crab version with heirloom tomatoes, hollandaise, and their incredible crispy potatoes ($14).

Lido’s director of food and beverage, Todd Brown, offers a fine wine list at Lido and selects wines for the cooking classes. He seems to be around at every moment, and I commend him for his treatment of all guests and assistance in choosing exactly the right wine for your menu choices. Admirably, he doesn’t charge corkage fees for the first two bottles of local wines you bring into Lido’s dining room (this offer isn’t available for banquet services). Lido will present their “restaurant month” menu, offering multiple choices, through January and February.

Last November, I attended a cooking class that’s conducted monthly by Collins and Puga, and it was awesome—and that’s said by a California Culinary Academy alumna. A class of 10 sat and observed Collins as he taught us his recipes for a fabulous wild mushroom risotto and short ribs braised in red wine. Puga prepared delightful crepes filled with Windrose Farms Jonathon apples, pecans, currants, and caramel. After the cooking demonstration, we sat down to enjoy an awesome meal of the prepared dishes among new friends who shared our love of food and wine.