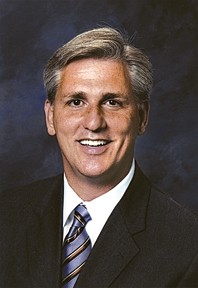 U.S. Rep. Kevin McCarthy wants to set the record straight: He’s not against earmarks, that practice where lawmakers leverage their influence and clout to wall off chunks of federal money for specific purposes, generally in their own districts. Rather, he says, he’s against corruption in the earmark system.

The ambitious Republican from Bakersfield, however, recently took some lumps for the manner in which he expressed his concerns, rhetorically asking in his hometown paper: “If everyone else is robbing a bank, should I rob a bank?”

He backed up those criticisms with action: He declined to pursue earmarks for his district in the 2009 budget cycle (actually, he requested earmarks for military projects, so only other projects lost out).

The backlash came because his criticism of the earmark system occurred only after he requested tens of millions of dollars worth of earmarks in the prior budget cycle. And, regardless, he’s back to requesting earmarks again. For next year he’s put in more requests, but he said it’s different now.

It’s that muddle of actions that have led critics to charge that McCarthy was for earmarks before he was against them, and is for them again.

But McCarthy says it all makes sense. In fact, he believes he helped change the system for the better. The biggest change, according to McCarthy—the thing that got him back on the earmark bandwagon—is transparency. Now members of Congress are supposed to disclose their requests online.

McCarthy has always posted earmark requests online. He even posted the military earmarks with an attached statement on his website stating how he believed the system was broken and too secretive.

McCarthy, a second-term Republican who represents northern SLO County, told the Bakersfield Californian on March 22 he was steering clear of most earmarks in 2009. That article left the impression that McCarthy was against earmarks and his critics did not miss the opportunity to pounce. The paper later clarified (at McCarthy’s request) that he was not against earmarks, just the wasteful and undisclosed ones.

Admittedly, he said his pseudo earmark ban this year was intended to get media exposure and apply pressure for reform. But what was meant to eliminate pork-laden legislation did so at the expense of local programs.

To make his point, instead of highlighting bad earmarks, he chose not to request money for local projects. His earmark skepticism isn’t new; he said he’s always been a critic, but this year is the first time he intentionally did not make requests.

Some have accused him of flip-flopping because of the Democratic shift in the White House. But, McCarthy said, he actually made his 2009 requests before Barack Obama was elected, so it shouldn’t be interpreted as a mere slam against the new administration.

McCarthy did, however, cherry pick military projects this year and sacrifice other projects to make a political statement.

“Kevin McCarthy says the system's broken and as a result, he won't make project funding requests for his constituents,” said Andy Stone of the Democratic Congressional Campaign Committee. “But he didn't have any problem making funding requests last year under the very same system for projects that benefit the county. That's more than just inconsistency, that's blatant hypocrisy and McCarthy's constituents are the ones who pay the price.”

Much of the criticism was fueled by McCarthy’s statements in the Bakersfield Californian. He said he was misquoted and therefore the critics have little ground to blast him.

“I’ve never taken a no-earmark-at-all position, but what I’ve taken is we need to reform it and I was willing to hold back,” McCarthy said.

He chose to slight some local projects to prove a point, but why not simply make his requests transparent to serve as an example? McCarthy responded that a small display wasn’t enough to send the message. “We had to take it to that next level,” he said, “to get greater attention.” Mission accomplished.