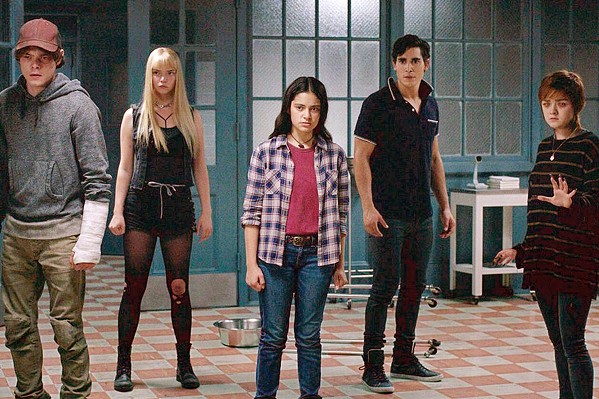 Co-writer/director Josh Boone (The Fault in Our Stars) helms this confused sci-fi, fantasy, horror, romance, drama, and unintentional comedy about five young mutants forced to live together in a secret facility overseen by the Nurse Ratchet-like Dr. Reyes (Alice Braga), whose job is to help the mutants discover and control their powers apparently so her superiors can use them as weapons.

Our protagonist is Native American teen Dani Moonstar (Blu Hunt), who in the opening set piece we see survive some kind of horrible storm that kills her father (Adam Beach). She awakes to find herself trapped with mean girl Illyana Rasputin (Anya Taylor-Joy), country bumpkin Sam Guthrie (Charlie Heaton), shallow hunk Roberto da Costa (Henry Zaga), and deeply religious Rahne Sinclair (Maisie Williams). Together, they must exorcize their past sins and join forces to save themselves while with straight faces reciting inane dialogue.

It's quite atrocious, with a story so cliché that it even busts out the old Native American analogy of two wolves—one good and one evil, fighting inside us all, and the one we feed wins—except with bears. An offhand lesbian romance between Dani and Rahne signals that the film wants to be woke, but these characters are cookie-cutter and this story borders on the stupid. Watch it for fun! (94 min.) Δ