The new SLO Skate Park, which opened to the public Feb. 28, is a skater paradise!

View a slideshow of the SLO Skate Park.

I can’t wait for Saturday’s grand opening (plus I want to see the park without thousands of skaters all over it), so on Friday, Feb. 27, I head over to Santa Rosa Park where a group of workers is disassembling the chain link fence that has surrounded the construction site and wander into the new SLO Skate Park. 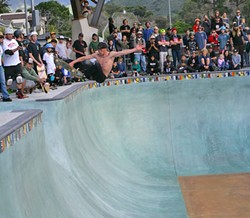 Wow, wow, wow! This park is amazing! There’s a really deep bowl, a couple smaller bowls, an undulating half pipe with a past-vertical wave lip, lots of ramps, rails, steps, and ledges—even the picnic tables have metal rails to grind.

The public artwork created by Jed Joyce and John Jones is truly amazing! Large metal “trees” rise out of skateable concrete bases, with “foliage” made up of cutout words that create patterned shadows. Most of the bowls have stained concrete and all are as smooth as glass. Some of the ledges and ramps have brightly colored graphic elements reminiscent of street signs.

This is a long way from the first skate park that was built on the site in 1994. Eventually, the wooden ramps built by volunteers began to break down, and skaters began lobbying the city to construct a permanent concrete park. In 2007, the city made the park a goal, applying for grants (thanks, Tony  Hawk!), requesting donations from the public, using General Fund money, and applying Measure Y’s half-cent sales tax funds to the 15,500-square-foot,  $2.2 million project.

It was all worth the effort and the wait. On Saturday, Feb. 28, my family jumps  on the shuttle from downtown to the park  and we’re dropped off into a sea of way more than 2,000 people swarming all over the park and the grounds filled with vendors.

Our kid quickly finds some friends and heads off to skate while my wife and I check out the park’s biggest bowl, where some seriously fearless shredders are racking up plenty of air time, long rail grinds, sick upside down hand plants … and a few disastrous spills. People are packed in shoulder to shoulder to watch the action.

Next, we check out the street skaters practicing tricks, sailing off ledges, and grinding down handrails—basically all the stuff they love to do but aren’t allowed to in most private and public spaces. If I had a nickel for every time my kid’s been run off the Target parking lot by security, I could hire a limo to drive him to the new park.

I’ve got to say, though, it’s a madhouse, with dozens of skaters ripping it up all over the place. As big as the park is, it’s definitely maxed out today!

The next day, on Sunday, March 1, we drop our kid at the park while my wife and I head to a movie. When we return, we walk over and see about 150 people skating away. Think about it! That’s 150 people on a rainy Sunday afternoon who now have something fun to do instead of being chased away from skating in places they’re unwelcome. City of SLO, you done good!

The SLO Skate Park opened to the public on Saturday, Feb. 28 with well over 2,000 people attending. This slide show begins with shots taken the day before the park was open to the public as well as during the grand opening. Despite the many shots of skateboarders without helmets and pads, the City of San Luis Obispo says those without proper protective equipment can be issued citations.