The NIMBY who stole Christmas

Every SLOcal in SLO loved Christmas a lot,

But the NIMBY, who lived near downtown, did not!

He'd heard plans from the city while out on a lark,

To put a big Christmas tree in his neighborhood park.

While the SLOcals exchanged gifts and holiday greetings,

The NIMBY railed against the tree at the City Council's next meeting.

"It's improperly zoned! It'll back up the traffic!"

"The crowd it will draw will cause terrible havoc!" 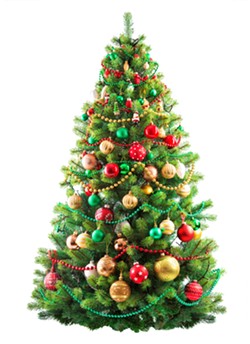 But the council was deaf to the poor NIMBY's plea,

And they all voted yes on erecting the tree.

The NIMBY went home and he started to brood.

There was a show at the Fremont, but he was not in the mood.

"I must stop this change to my neighborhood now.

"I must stop that terrible tree, but how?"

Then he got an idea. An awful idea.

The NIMBY got a wonderful, awful idea.

He put on a red shirt, stuck a rose in his hair,

And if you squinted your eyes hard he looked just like the mayor!

With this clever disguise the NIMBY had no trouble at all,

Sneaking into the planning department down at City Hall.

He even shredded the CEQA report on the tree.

He chuckled and snickered as he snuck home in the dark.

"Now let those jerks try to ruin my park!"

His mission was over and there was nothing to do,

But wait to hear all the SLOcals crying boo-hoo!

So he sat in his house, just waiting around,

Then as the sun arose, he began hearing a sound.

The sound was so merry, impossibly jolly!

He ran to the park, and what did he see?

It was smiling SLOcals and a huge Christmas tree.

He looked at the lights and the star on the top.

"They did it without permits," the NIMBY said with a snort.

"They did it without regulations or environmental reports!"

The NIMBY stared and he puzzled,

And what happened just then? Well, the SLOcals, they say,

The NIMBY just grumbled, "I guess the tree is OK."

And he joined them all singing in the dancing light's glow.

And so passed another Christmas in the city of SLO. Δ