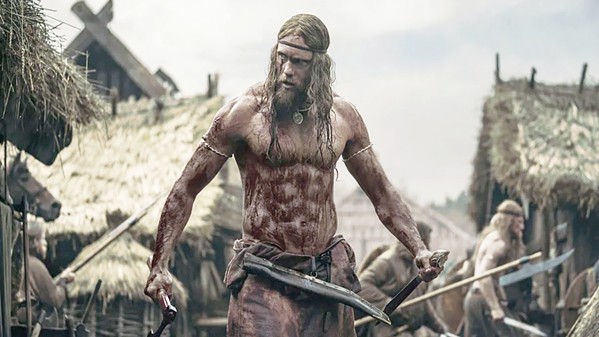 Co-writer Robert Eggers (The Witch, The Lighthouse) directs this action-packed revenge tale about 10th century Viking prince Amleth (Alexander Skarsgård), who embarks on a bloody quest to avenge his father's (Ethan Hawke) murder at the hand of his brother, Fjölnir (Claes Bang), who takes the king's wife, Queen Gunrún (Nicole Kidman), as his own. Co-written with Sjón (Lamb, Dancer in the Dark). The movie also stars Anya Taylor-Joy, Willem Defoe, and Björk.

Move the "h" in Amleth to the front of his name and you have Hamlet. In fact, Shakespeare's most famous play (written between 1599 and 1601) derives its plot from Danish history document Saxo Grammaticus (written around 1200) about a hero whose name translates as "not sane" avenging his slain father and ascending to Valhalla. As a cracking good action flick with stunning visuals, The Northman is spellbinding, but Eggers has more in mind than Norse mythology.

Toxic masculinity abounds in Viking culture. Women are slaves—even the ones meant to be queens such as Gunrún and Olga (Taylor-Joy). And what of Amleth's quest and ultimate goal? Maybe it's just me, but dying in battle to ascend to Valhalla seems like a pyrrhic victory. I'd rather grow old with my queen. Eggers and co-writer Sjón seems to be saying Viking machismo is utter insanity. (136 min.) Δ