Tell the California Department of Recreation and
Parks what you think about the Oceano Dunes
District Habitat Conservation Plan by attending a
scoping meeting at the Ramona Garden Park Center
in Grover Beach, 993 Ramona Ave., from 6 to 8 p.m.
Can't attend? State parks is accepting written
responses until 5 p.m. on March 12. Find the notice
on the Federal Register by visiting federalregister.gov.

If past conversations about the Oceano Dunes State Vehicular Recreation Area (SVRA) give any indication of what lies ahead for the controversial state park, nothing is going to be easy to decide on and neither the riding enthusiasts nor the environmentalists will be satisfied with the end result.

"We're a popular SVRA, so it's always going to be contentious," said Ronnie Glick, the senior environmental scientist for the Oceano Dunes District of state parks—an area stretching from the Guadalupe-Nipomo Dunes Complex to Pismo State Beach.

But the goal is to make those discussions a little easier to have, Glick said, by getting the public involved in the decision-making process as early as possible and updating some of the management practices that were set in place more than 30 years ago. As the park concurrently begins to update its general plan and works to implement a new dust control management plan, it's also started the scoping on something called a habitat conservation plan (HCP). That last document could finally bring the state park into compliance with the federal Endangered Species Act. 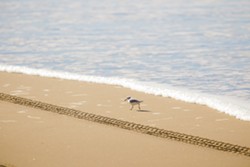 The federally listed animal species covered by the HCP would include the Western snowy plover, California red-legged frog, California least tern, and tidewater goby. The one you've probably heard the most about is the snowy plover, a small, cute shorebird that's become an environmental touchstone on the Pacific Coast. It was listed in 1993, and the Sierra Club sued state parks over the plover in the early 2000s.

The crux of that lawsuit was that the Oceano Dunes wasn't in compliance with the Endangered Species Act because the park didn't have a conservation plan in place. Although that lawsuit was settled in 2004, the riding area still doesn't have a federally approved plan in place. In 2017, the Center for Biological Diversity threatened to sue over the exact same issue due to several snowy plover deaths at the dunes in 2016 that were attributed to vehicles, including some found in tire tracks on the beach.

Because recreational activities at the dunes, such as driving, could result in the accidental deaths of these species—also known as incidental takes—the park is required to put an HCP in place. The plan essentially acts as a take permit with the U.S. Fish and Wildlife Service, which enforces the Endangered Species Act. And because that permit isn't established yet, it puts the dunes at risk, Glick said.

"Every time there's an incident with a snowy plover ... we as an agency incur a little bit of liability," Glick said. "We notify the Fish and Wildlife Service. We notify their enforcement agency. ... And it's really up to them to decide how to proceed with things."

Ashley Spratt, a public affairs officer with the Ventura Fish and Wildlife office, told New Times via email that biologists and law enforcement staff met with state parks about the 2016 plover deaths and agreed to "avoidance and minimization measures." Those measures are already in place, she said, with exclosure fencing, which protects breeding areas, and the park's management and monitoring of the least tern and plover breeding programs.

Even though the dunes has one of the most successful snowy plover breeding programs on the West Coast (according to the California Coastal Commission and Fish and Wildlife, which have overlapping jurisdictions with the park), a vehicle killing or injuring a plover could potentially put the park's recreational activities in jeopardy. Glick points to Massachusetts as an example, where beaches are completely closed to vehicle activity during piping plover nesting season.

"There are consequences for us if this sort of thing happens," Glick said. "But they're [Fish and Wildlife] not in the business of closing public lands. The HCP is an acknowledgement that despite all of our best efforts, things are going to happen, and we will occasionally have endangered species that are injured on our site."

In those meetings over the 2016 plover deaths, state parks also agreed to further development of the HCP. The plan is to formalize the management practices that have been in place at the dunes since 2004, Glick said. The HCP scoping period, which runs through March 12 includes a public meeting on Feb. 7 in Grover Beach, aims to gather input from the public on the range of things the plan should cover—whether it's culture, conservation, or recreation.

Spratt added that it could take months or years to get an HCP issued and a permit in place, depending on how complex the issues that it covers are.

"Working together with California State Parks and the local community, we aim to find a balance between recreational opportunities and habitat management that avoids and minimizes effects to listed species and supports their recovery," Spratt said. "The proposed HCP would describe measures designed to avoid and minimize the effects of recreational activities and manage for threatened and endangered species and their habitats and contribute to their recovery."

As most things with the dunes go, there is already some skepticism about the proposed plan. Lisa Belenky, an attorney with the Center for Biological Diversity, said the environmental nonprofit has some concerns with what the Fish and Wildlife Service said in the HCP notice in the Federal Register. She's referring to one particular statement that potentially outlines the reduction of some of the fenced-off exclosures that currently protect plovers from recreational activities. She called the sentence a little unclear and said that the center would be keeping an eye on things.

"Right now, that's our primary concern, I think, and, of course, any increase in recreation will lead to an increase in impacts," Belenky said. "It's a little unusual because an HCP is not usually used to reduce conservation. That's not the purpose." Δ