Do you have any idea how hard it is piss off a nonprofit? They're filled with really nice people trying to do really nice things for people in need. They're like saints or angels who have to beg for money to keep their programs going—programs that wouldn't be needed if our government and social safety net actually worked. 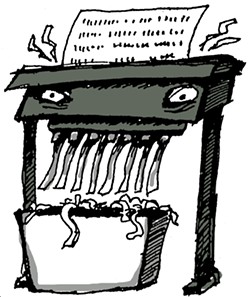 So imagine my surprise when our beloved SLO County Board of Supervisors, the most functional and effective governing body to ever lead a county (wink-wink), managed to upset local nonprofits such as Big Brothers Big Sisters of SLO County, French Hospital Medical Center Foundation, Paso Robles Youth Arts Center, and Boys and Girls Club of the Central Coast. How did you manage it, dear supervisors?

Easy-peasy-fast-and-sleazy, that's how! The county invited local nonprofits to apply for grants funded by the American Rescue Plan Act (ARPA). The county scored a cool $55 million and generously offered to set aside half a percent ($3 million) to dole out to organizations, and almost 60 nonprofits lined up with their gruel bowls requesting "more, sir." But then the county suddenly decided that, "Yeah, we changed our minds, and now we're only going to give to nonprofits that address housing and homelessness."

"The fact that the intention of the funding shifted midstream is an unfair process as far as I'm concerned," Big Brothers Big Sisters of SLO County CEO Jenny Luciano told New Times.

"It was very shocking to us," Boys and Girls Club of the Central Coast CEO Michael Boyer said. "I'm happy that any nonprofit gets the money; I'm more concerned with the process. It's about following the RFA [request for applications] you put out."

What's really a pisser is that both organizations do help children and families avoid homelessness! If they knew that was going to be the focus of the funding, they would have written their grant requests accordingly. Not only that, but the county already earmarked $6 million of the $55 million ARPA funds to address homelessness.

After the board's shady switcheroo, the normally nice nonprofits that applied but were denied gave the board an earful, and so the board voted unanimously to table their previous recommendations and directed county staff to revisit the grants ... but "you know, still prioritize homelessness."

What does that even mean? Go back and look at the rejected grants, see that—as written—they're not directly focusing on the homeless problem, and reject them again? WTF?

And speaking of F's, did you hear about the Cambria Community Services District (CCSD) and its need to "delete the extraneous F"? I guess the CCSD board is hoping to unseat the SLO County Board of Supervisors as the most functional and effective governing body in the county. Sigh.

The CCSD, which apparently is really good at managing money and providing transparency to its constituents (not!), recently voted to raise Cambria water rates by 19.2 percent and sewer services by 24.2 percent over the next three years. Except then they noticed a random F printed in the third paragraph of the document, so board President Don Howell had to stop the proceedings to get that effing F outta there. Then the board realized the document was missing the section that was supposed to adjust rates for inflation after the three-year period, so they had to stop again and have District Counsel Timothy Carmel fix that.

One thing the CCSD clearly hasn't wasted money on is a proofreader. On the other hand, they've spent—according to Cambria resident and rate hike protester Christine Heinrichs—"probably over $20 million" on a water reclamation facility built eight years ago that still doesn't have the "required application for a coastal development permit." It's sitting idle as Cambria landowners desperate to build their dream homes on empty lots purchased years ago are told a building moratorium due to a lack of water remains in effect. Dreams deferred are dreams denied, amirite?

And speaking of dreams and those who would defer them, the NIMBYs of ritzy San Luis Drive have been awoken by the proposed new business called The Hub, which hopes to transform 1701 Monterey St.—most recently home to Daylight Gardens—into a 12,180-square-foot bar, restaurant, and entertainment venue.

The Hub is trying to "bring a little life to what is kind of a wasteland" in that area, Central Coast Brewing owner George Peterson said.

Wasteland? Why, I never!

"In addition to the innately louder nature of most of the businesses that will be a part of The Hub, the increased vehicular traffic, car lights, doors slamming, etc., is going to be profoundly different in terms of sound and light impact on surrounding neighbors," San Luis Drive resident Rick Chapman wrote in a letter to the city.

Sorry, everyone who would love to have some fun at The Hub, but we mustn't disturb Rick. Δ

The Shredder is a real pistol. Reap the whirlwind at shredder@newtimesslo.com.