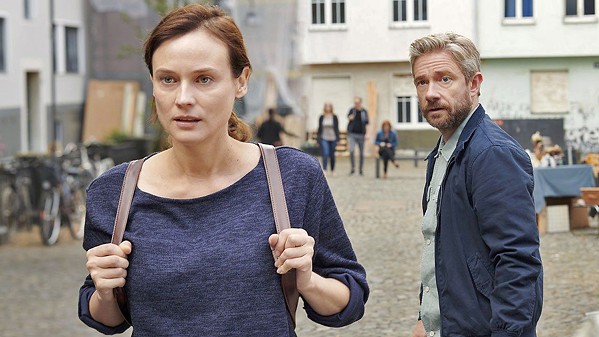 Writer-director Yuval Adler (Bethlehem, The Secrets We Keep) helms this story based on former Israeli intelligence officer Yiftach R. Atir's 2016 book The English Teacher: A Novel, about Rachel (Diane Kruger), a young Western woman recruited by the Mossad to work undercover in Tehran, Iran. We meet her handler, Thomas (Martin Freeman), and her target, Farhad (Cas Anvar), as Israel purposely feeds faulty intelligence to Iran as they work to build their nuclear capabilities. Atir's novel was censored purportedly because it revealed too many spy-craft secrets.

Rachel is the perfect recruit. Her mother's dead, and her father's estranged. She's close to no one, and she moved around frequently throughout her childhood. Proficient at multiple languages, she takes on the role of a language teacher, building her background and bona fides over a year before she's finally turned loose in Iran on assignment.

It's a taut, fascinating thriller, and Kruger is terrific as Rachel, both capable and steeled, and vulnerable and endangered. She's also a little bit of a wild card. Unlike most Mossad operatives, she isn't burdened by dogmatic ideology, but she is burdened by morals, which puts her at odds with Mossad. If you're in the mood for a realistic and tight little spy flick, this one's worth a couple of hours. (116 min.) Δ