The Nutcracker is the lifeblood of Civic Ballet. On Saturday, Dec. 10, the company will have performed the show for 34 consecutive years. The ballet—adapted by a French writer from a German children’s story and scored by a Russian composer—has perhaps enjoyed its most enduring success in the United States, and the Central Coast is no exception. In fact, The Nutcracker is such an American holiday tradition that ballet companies regularly rely on the show to fund their riskier spring productions.

“It is the reason for the Civic Ballet,” said Artistic Director Drew Silvaggio, now in his eighth year of directing the ballet. Without Tchaikovsky’s Christmas classic, he said, “The Civic Ballet as a nonprofit could not be financially viable.” 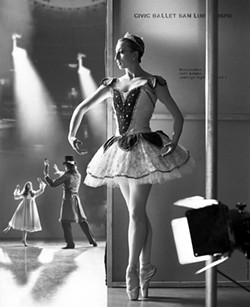 Many audiences return a second time during Nutcracker’s run, Silvaggio attests, returning with friends or family, or to see both Claras in action. (Ever since a dancer playing Clara fell violently ill one year, the role of Clara has been shared equally between two dancers, internally labeled Clara 1 and Clara A.)

But despite the country’s love affair with Nutcracker, not everyone is so charmed by the ubiquitous production, which has been going strong since its St. Petersburg premiere in December of 1892. The Washington Post dance critic Sarah Kaufmann opined that The Nutcracker keeps ballet from moving forward creatively, writing in 2009, “That warm and welcoming veneer of domestic bliss in The Nutcracker gives the appearance that all is just plummy in the ballet world. But ballet is beset by serious ailments that threaten its future in this country. … Companies are so cautious in their programming that they have effectively reduced an art form to a rotation of over-roasted chestnuts that no one can justifiably croon about.”

It’s a funny conundrum that the production that keeps ballet companies afloat, providing the means for more avant-garde exploration, is the same one that projects such a classical, safe view of ballet. Kaufmann’s critique may easily apply to many dance companies. But Silvaggio, known for his edgier, more contemporary offerings—in a style he once characterized as “mean, gritty man-dancing”—has found in Nutcracker an artistic challenge greater even than that posed by the creation of his original pieces. He choreographs and casts the production from scratch each time—something one cannot expect, he pointed out, from the San Francisco Ballet, which repeatedly recycles the same choreography. While the difficulty of re-imagining Nutcracker increases with each year, he adds, so does the competency of his dancers and their choreographer.

“It’s not simple, and it doesn’t just come together,” he insisted. “In that way, it’s more artistic than something new.”

This year, in order to keep the show fresh and exuberant, Silvaggio also employed the choreographic talents of Nutcracker regulars Dana Lossing, Michelle Epperheimer, and Jackie Lee (the latter of whom has danced in every Nutcracker the company has produced, making her, one imagines, a veritable human rolodex of possible movement.)

Silvaggio doesn’t typically recast the same dancer twice in a row, though this year Ryan Beck reprises the role of the Nutcracker—and you’ll see why. The lovely Harmony True is the Sugar Plum Fairy, and the coveted role of Clara is split between Greta Carlson and Madison Price.

Where past productions have seen Claras Silvaggio described as “more lyrical, delicate, and mature,” Carlson and Price are younger than usual; the character they embody more excitable, perhaps a touch rambunctious. This year, the director explained, he wanted a Clara with a certain freshness and youthful awe; someone who would react to the ballet’s giant, moving namesake with a child’s enthusiasm.

“For the audience to understand that this is special and magical,” Silvaggio said, “it takes a vulnerable and sensitive Clara.”

Clara is onstage for almost all of the two-hour performance, and her palpable excitement and accessibility is one of the key factors of a quality show.

“If a little kid in the audience feels that they can identify with Clara at any part of the ballet, that’s a job well done,” Silvaggio said.

In the end, it’s always a magical, if rather obligatory, production. At the Civic Ballet, its annual overhaul stretches the company to its physical and artistic limits, keeping the choreographer/director and his dancers in top form. You can bet when warmer weather arrives—bringing with it the sweet promise of unrestrained creativity—they’ll be ready.