Geoff McFetridge paints on the walls of the University Art Gallery

You may never have heard the name Geoff McFetridge, and the artist, animator, and graphic designer may be perfectly content to keep it that way. But his work has likely impacted you. You may even be wearing it. The artist’s clean, rounded lines and clever, deceptively simple graphics have appeared on Patagonia clothing, Nike shoes, and Salomon snowboards, to list a few. McFetridge also created the album art and a music video—both featuring his black-on-white, subtly surreal doodles—for The Whitest Boy Alive’s album Dreams. (The music video for OK Go’s “Last Leaf” featured a McFetridge animation too, but this one he made with a laser and 2,430 pieces of toast.) His work also seems to have played some part in the marketing of every middlebrow thing on the market: Hewlett Packard, Intel, the L.A. Metro, Pepsi, the Gap, and Prius are some past and present clients. Recent projects include a label for Beck’s beer and the title sequence for an upcoming film. 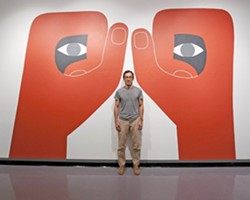 But this is only the half of it. A day job. McFetridge also has one foot firmly rooted in the art world, as an impressive portfolio and list of solo shows in the United States, Europe, and Japan reveals. In these more personal art projects remains the same amiable roundness and even a sort of neutered, kindly universality—not unrelated to drawings in airplane safety manuals or picture books for babies—but here is a melancholy poetry as well.

“The whole idea is, you make it friendly because inside it is personal and dark,” McFetridge said, sitting down for a moment in the middle of installing his current show at Cal Poly’s University Art Gallery. “You have an emotional response to them.”

In his latest show, enormous paintings on the walls interact with smaller paintings on canvasses. A great blue hand pinches a painting between thumb and index finger. The piece in its grasp almost depicts two horses, but where one’s head should be, the other’s tail starts, creating a restless circle. Elsewhere, two hands, taking the shape of binoculars, create eyes on an otherwise blank and expressionless face. A third hand forms a mouth. Next to that, a man sits on a chair of an inverted sitting man. Several identical humans in swimsuits seem to jump from one central point—but how can they jump, when there aren’t enough legs to go around? Describing the work makes for crazy talk.

To illustrate his previous point, McFetridge referenced the swimsuited figures: “For me, this painting, there’s kind of a brutality to it. It’s reduced to the point where it’s oppressive. … These people are trapped in this reducted world.”

McFetridge prefers to use the word “reductivist”—rather than the loaded term “minimalist”—to describe his art. Reducing a company’s identity to an image, even distilling it further into a single shape, has been his job for many years, and the impulse carries over into his personal art projects. This crossover between the fine and commercial art of McFetridge may have been best expressed in a Copenhagen exhibit last summer, titled Us as a Logo. He points often to that show, and this idea in general, to explain what his current work is about.

“The main painting that title was based on is all these people coming together, like a group hug,” he explains. “It’s from above, and their heads are dots, and they’re hugging, but they’re also kind of crushing. And they’re graphic, just shapes, basically. … You’re becoming a logo, and there’s sadness to that. Like if you look at somebody really far away. Not only are they small, but they start losing their details. And that idea of, ‘What if I painted that close up?’ is what these people are.”

But to turn a person into a logo has a rather cheapening effect, as McFetridge’s work on this subject shows. It flattens the dimensions that give us nuance and mystery. It paints us by number. It threatens to expose, with devastating finality, all that we are, until we are little more than insects transfixed by pins, personality all bled out.

But for a corporation, a logo is a necessity, a face to wear in public. A corporation cannot afford to be mysterious, and having no physical form of its own, it chooses one.*

Growing up in the ’80s may have something to do with McFetridge’s chosen profession, and his seeming immunity to the fear of selling out. It was an era that boasted, in his words, “really efficient popular culture.”

“Like they really had it down, you know? There were zines and there were skateboards and there were T-shirts and things were being produced and sold,” he said. “It was a mainstreaming of subculture. It was the dawn of modern marketing to young people. So there is a cleanliness and a kind of likeability that I have in my work that kind of comes from that, like making powerful stuff—stuff that’s like, this … is … going to be … awesome!”

The word takes him almost by surprise, like a sneeze.

“So I feel like I carry that spirit,” he continued. “I want to make stuff that’s awesome, because that’s what I grew up with and that’s the ideal … and maybe I’m not saying awesome in my head, but I guess I’m meaning awesome.”

Here, though, arises a sort of semantic dilemma. The word that once described the gods, the Grand Canyon, a lion’s roar, or the solar system is now easily employed to describe, like, a cool skateboard trick or a sticker. But McFetridge is well aware of this dilution, and in his daily struggle to reduce a thing to its essence, he seems to simultaneously reach for the word’s true meaning.

“You might end up with the”—he shrugged—“awesome, but you are trying for the original awesome.”

* I liken this concept to trying to picture a ghost, and McFetridge runs with it, envisioning, perhaps, the fictional pitch meeting at which our perception of ghosts was solidified: “At one point, someone was like, ‘If we’re talking about ghosts, we need to make them look like something. They’ll be people, but they’ll be kind of white and you can see through them.’ Because everyone wants to talk about ghosts, because as humans we need to have spirits and an afterlife. Then the wavy sheet one—someone came up with that one, too. It’s kind of cooler, because it’s more abstract. Why isn’t it just a cloud? Why isn’t it a poof? Or a thread? Why isn’t a ghost a piece of string?”