The Palm Theatre's monthly 'Take Two Live' is the place to be for cinephiles!

It’s Sunday, Nov. 30, and I’m nestling into The Palm Theatre’s comfy chairs and noshing on inexpensive (a big bag for $4!) and buttery (yes, real butter!) popcorn as I await the final installment of Take Two Live for 2014—a screening of the 2006 Best Foreign Picture contender Joyeux Noel.

Hosted by Palm Theatre owner Jim Dee and former Insomniac Video owner Bob Whiteford, the monthly series presents classic and often-obscure films, which the two introduce, screen, and then close with a Q-and-A. For years, Bob and Jim had a regular Monday night KCBX radio program called Take Two, an hour-long program that discussed all things film. They really know their stuff!

There’re about 85 people in the Palm’s biggest theater, which holds 120, and the crowd claps appreciatively when Bob and Jim sit down before two microphones.

Jim reminds us that it’s 2014, and next month’s Christmas Eve marks the 100th anniversary of the event the film depicts, in which German, French, and Scottish soldiers agree to a brief truce to celebrate Christmas together.

Jim also mentions Richard Attenborough’s 1969 film Oh! What a Lovely War, which also covers this incredible event, and Bob—a real World War I and II buff—sets the history surrounding the event, the “bungling calamity” that started the war, “static or trench warfare,” the meaning of “no man’s land,” and to put some of the battles into perspective, he explains that some clashes left as many as 70,000 or more men dead in a single day.

“That’s the daytime population of San Luis Obispo with people coming into town to work, and it was all fought over two football fields’ worth of shell-pocked mud,” reminds Bob.

Right before they run the film, Bob and Jim offer one more hint at understanding what we’re about to see.

“Peace on Earth and goodwill to men is the message,” Jim adds. “This event happened 100 years ago, and we still haven’t quite gotten it right.”

The film is emotionally powerful, filled with soaring music that pushes all my emotional buttons, and great performances mostly from actors I don’t recognize save for leads Diane Kruger, Gary Lewis, and Daniel Brühl.

After their Christmas Eve celebration, the men on the various sides, now that they’d met their “enemies” face to face and discovered their humanity, couldn’t continue fighting, and their units were disbanded and sent to other fronts.

After the screening, Bob points out that the places the soldiers were sent—Verdun and Tannenberg—were real meat grinders with high casualty rates. 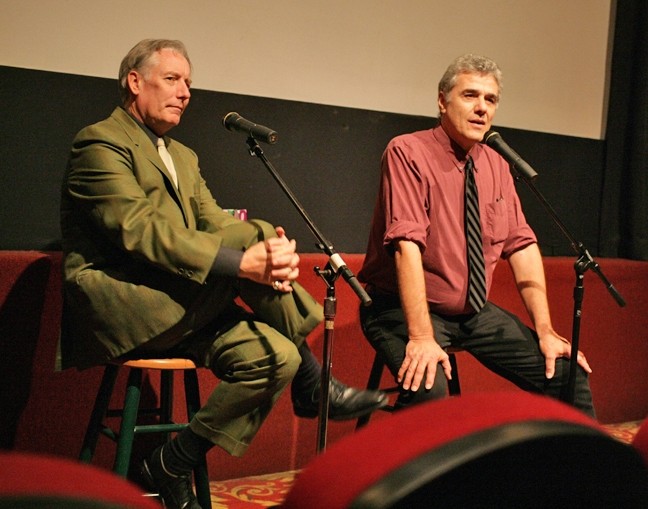 “Their chances of survival were probably zero,” Bob laments, before they open the floor for comments and questions. Jim’s wife, Patty, moves through the audience, handing a mic to those wishing to speak, and for about 20 minutes or so, those of us in attendance have a chance to reflect on this powerful film and its depiction of the goodness of humanity in the midst of war, and the irony that such goodness was seen as weakness, insubordination, and fraternizing with the enemy.

I think we all agree as we embark on this holiday season that we could all use a little bit more of the film’s message. By the way, Joyeux Noel means Merry Christmas.