The party is still over

We donâ€™t want you. Stay away. The partyâ€™s over. Mardi Gras has been cancelled 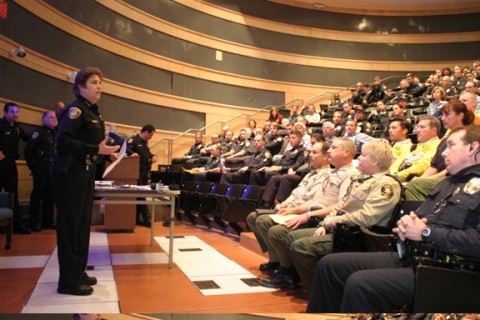 #
A peculiar message and concept, perhaps, for a town so devoted to and dependent on visitors, but one that certainly worked last year, when police agencies from all over the state converged on San Luis Obispo to prevent the kind of behavior and ensuing â€œriotsâ€? that permeated the annual Mardi Gras celebration in February of 2004.

Expect pretty much the same this year, despite an official bon temps proclamation for the festival announced two weeks ago by the new king and queen.

â€œLast yearâ€™s operation and approach to the situation was successful,â€? says SLO police spokesperson Dan Blanke. â€œWeâ€™re taking an almost identical approach this year, but the plan all along was that we would step it down each year until we felt comfortable the problem was resolved.â€?

Following the 2004 commotion, local police visited other cities once beset with similar party problems, returning with a marketing campaign that featured heavy involvement by members of the community, the media, and law enforcement. More than a million dollars was spent for last yearâ€™s plan that also included an extremely high police presence. At least 450 uniformed officers, many with riot gear, participated from all over the state. Video surveillance was set up in various parts of town, as were several DUI checkpoints, and portable booking stations were positioned.

Word went out, and despite a large crowd, arrests went way down last year and there wasnâ€™t any rioting. Expect more of the same this year, although not quite as harsh.

The police captain does say there will again be a strong outreach effort between officers and students, which he notes was highly successful last year. He also advises people to expect high-tech surveillance, booking stations and DUI checkpoints â€” but 100 less officers. â€œArrangements have been made with the CHP, deputies from sheriffâ€™s departments statewide, university police, and horse units,â€? he explains.

Blanke says the official plan for Mardi Gras 2006 will be announced January 25, a month to the day when good times wonâ€™t be rolling again.