The perils of plastic

Some students are learning about credit cards the hard way

Robert Peters received a free T-shirt when he filled out his first credit card application during WOW at Cal Poly in the mid-'90s. But hidden between the lines of the fine print was a hard lesson that took its toll for years after the shirt was worn out. 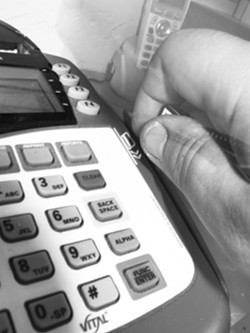 # "It made it easy to spend more money than I had. I ran up somewhere between a thousand and two thousand dollars, just going to the movies and going out to eat," Peters said.

At first, he sent in the minimum payment each month, as his unpaid balance grew. But on his slim student-style budget, he couldn't afford to keep up the payment schedule. Late fees were tacked on, the interest rate skyrocketed, and eventually the financially strapped Peters defaulted on his credit card.

"It was a big black mark on my credit score, and it had a big effect on me. I couldn't get a decent loan for a car. I couldn't rent an apartment. Even employers checked my credit report when I applied for a job," Peters explained.

That "big black mark" followed him for seven years before finally disappearing from his credit report.

For Steve another former Cal Poly student who didn't want his last name used because he's embarrassed about what happened to him the effects of his credit card debt lasted even longer.

He, too, signed up for his first credit card at the beginning of his studies at Cal Poly.

"I wanted it. To have no income, and be able to buy things I thought, 'Oooh, I get to be an adult.' But you start spending money like crazy, with no way to pay it back. I bought all kinds of stupid crap. I spent $3,000 or so, and I wasn't making enough to pay it off. I was slapped with over-limit fees, late payment fees, all kinds of fees, with an APR [interest rate] of 30 percent," Steve recalled.

"Creditors were calling and hassling me all the time. It was super-stressful," he said. "I had no idea it would impact my credit score and impact all kinds of things."

More than a decade later, Steve has finally managed to clear his credit-card debt. But he wishes he had been given more financial education, so he could have made better choices.

This year, Cal Poly students won't be confronted with offers of free T-shirts, mugs, or hats in exchange for their credit card applications at least, not on campus. The California State University system no longer allows credit card companies to offer free premiums on campus, according to Theresa Kaiser, marketing director for Cal Poly's El Corral Bookstore.

The companies are also prohibited from setting up their booths at the University Union plaza, according to ASI spokesperson Michele Broom. They are allowed in the lower plaza, in front of the bookstore but Kaiser said this year, like last year, none of the credit card companies have wanted to come to Cal Poly.

"These are college kids, and those little freebies matter. Now that they're not allowed to give out premiums, the credit card companies won't come," Kaiser said.

"It's a huge issue. I'm glad the way it turned out. You hear how kids get in trouble with their credit, and we don't want that to happen," she added.

Still, the average college student in the United States graduates with around $5,000 in credit card debt in addition to student loans, said Emily Davidson, communications for Credit.com Inc., a San Francisco-based credit education company. Graduate students have an even higher average outstanding credit card balance $8,612 according to an August report by Nellie Mae, a student loan corporation in Braintree, Mass., which also found that 93 percent of college students would have liked more information on financial management topics.

"The credit world is very confusing. There's a lot to take in," Davidson said. "You have to consider the actual implications of applying for a credit card. It's a major financial decision. It damages your credit score any time you apply, and a lower credit score may mean you won't be able to get an apartment or a cell phone."

She said it's "dangerous" for students on a limited income to have access to unlimited income through their credit cards, especially if they don't have a plan to pay off the balance.

"There's definitely, definitely a need for more financial education. It should be mandatory, as part of student orientation. You should know why it's important to pay your bill," Davidson noted.

A credit card seminar planned as part of this year's Week of Welcome for new students was cancelled, according to student organizers who said they couldn't find anyone to teach it.

"The big lesson is: Students need to be aware, and be responsible. College is all about experiencing new life lessons," he said.

"Sometimes you have to learn the hard way."