The pilot of a trash cleanup program for homeless camps was a success, but implementation could prove challenging

A little less than a mile southwest of the Octagon Barn, under the South Higuera Street bridge, and tucked deep into a patch of dense vegetation running alongside San Luis Obispo Creek, sits one of SLO County's many homeless encampments. 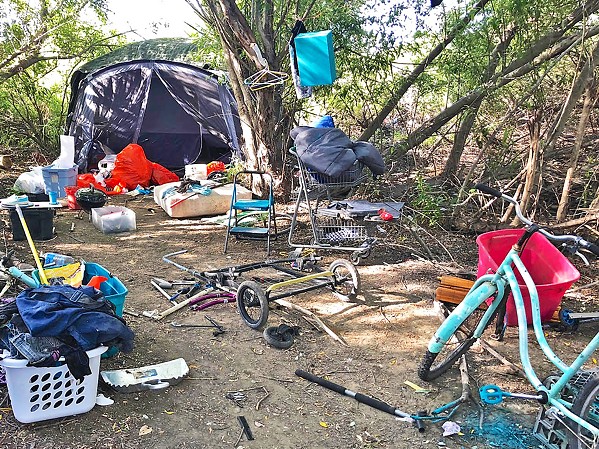 Tents and tarps make up most of the living spaces, which are scattered around and hidden in pockets of brush. At one creekside spot, a wheelchair holds an unattended stack of pots and pans, muddy clothes, and some luggage. Nearby, more permanent structures are built from pieces of plywood, tarp, and branches, and surrounded by a random assortment of mountain bikes, chairs, tools, and even a running generator.

It wouldn't be an ideal place to live, but aside from the obvious damage caused by recent rains, it's the perfect place for such an encampment. It's out of sight, somewhat protected from the elements, and clean. But it wasn't always this way.

Before September, nearly every corner of the camp was overflowing with trash—rotting food, discarded syringes, human waste, furniture left behind by long-gone nomads—that threatened the health of the camp's occupants and water quality in the nearby creek.

On Sept. 29, SLO County and SLO city agencies teamed up with nonprofits to launch the Blue Bag partnership pilot effort, a four-week trash pickup program that provided camp inhabitants with the tools necessary to dispose of built-up waste. The results of the program were released in a report published on Nov. 20, and, despite a few unexpected hiccups, the effort is being lauded by community members and public officials as a creative way to help individuals experiencing homelessness. 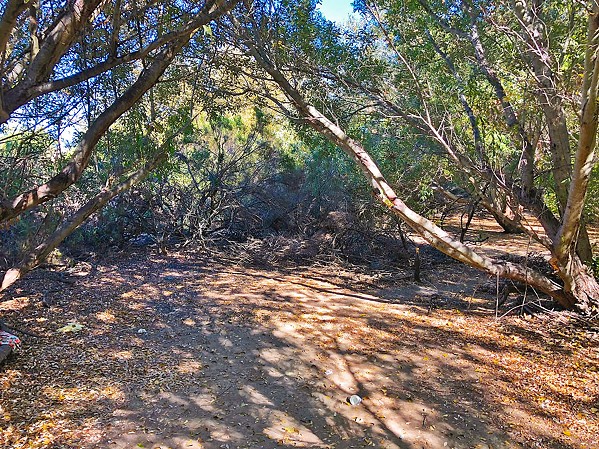 "This is a really terrific program," 3rd District Supervisor Adam Hill said at the Dec. 10 SLO County Board of Supervisors meeting. "I think this is a really smart and innovative program, and I plan to share it [with the Governor's Task Force on Homelessness] as well."

Hill's fellow supervisors agreed, calling the program "wonderful" and praising it as both affordable and practical. Hill just had one question, which remains unanswered: "What's next?"

SLO County's Blue Bag pilot was a modified version of an ongoing program in Santa Clara County. During the four weeks of the program's operation, a dumpster was installed near the Higuera bridge camp's entrance, and volunteers, county and city staffers, and law enforcement officials distributed nearly 200 blue garbage bags and scores of sharps containers—which allow for the safe disposal of used syringes—to inhabitants of the encampment.

Residents of the camp collected and disposed of roughly 6.8 tons of trash and 1,600 syringes in four weeks, according to the Nov. 20 report.

"The trash pickup program makes a lot of sense," according to Tim Waag, a longtime advocate for the local homeless community who helped out with the Blue Bag pilot.

Waag is familiar with about 27 of SLO County's 258 known homeless encampments, and he said a single legal dumping site is miles away from them all. It's illegal to dispose of trash in dumpsters outside businesses and private residences, Waag said, and individuals experiencing homelessness lack the necessary transportation to bring their trash to a faraway public site.

So trash builds up in encampments. It stinks, attracts rodents, threatens the health of nearby residents, and has the potential to cause a variety of environmental issues. If a waterway is nearby, Waag said rain runoff into the creek could include toxins from the piles of trash, impacting those living downstream.

Trash pickup services are inexpensive and easy to coordinate, and Waag said giving homeless individuals the opportunity to clean up their own living spaces prevents the need for future mass-cleanups carried out by contracted laborers. It improves the quality of life for encampment residents and gives them a sense of pride and achievement.

"Allowing people to pick up their trash is humanitarian," Waag told New Times. "It's not enabling."

Now, nearly two months after the program's end, trash is piling up again at the Higuera bridge encampment.

One longtime resident of the camp, who's living in an A-frame tent made of tarp thrown over a tree branch, says he loved the Blue Bag program. In the past, he says, residents of the camp have had to sneak across the nearby road and dispose of trash illegally at night. It's dangerous, and he doesn't like breaking the law, but he says they don't have many other options.

So having the Blue Bag dumpster around was nice, and he doesn't understand why the county can't just leave a dumpster out here for residents like himself.

With the pilot and report completed, the Blue Bag program is in a state of limbo. Kate Ballantyne, deputy director of SLO County Public Works, helped spearhead the project and said that while it only took about $2,000 from the Waste Management budget to fund, it also took a lot of coordination between many different agencies.

Public Works is looking for an agency that could take the lead on the project—expanding Blue Bag to other sites and to permanent implementation. Ballantyne said the program report is scheduled to be presented around the county in coming weeks.

At a Board of Supervisors meeting on Dec. 10, SLO County stormwater coordinator Anne Gillespie, who led the pilot project, said that while this trash cleanup strategy won't work everywhere, it could help much of the county's homeless population. But in order to work, it needs a leader. Gillespie said that leader hasn't been identified yet.

"We definitely saw a lot of people who are interested in helping, who want to help, who want to volunteer," Gillespie said. "We found less people who wanted to lead this effort." Δ