The Pismo Beach Police Department adheres to a rigorous auditing process, but what does that mean for systemic issues?

At a time when there's mistrust in government and law enforcement at all levels, some institutions have a solid history of transparency and accountability to stand on. The Pismo Beach Police Department has that on its side.

Since 2007, the Pismo Beach Police Department has been accredited by the Commission on Accreditation for Law Enforcement Agencies (CALEA), a nonprofit formed in 1979—in part by the National Organization of Black Law Enforcement Executives—with the goal of improving law enforcement performance through the development of best practice policing standards and review. Agencies accredited by CALEA go through rigorous training, regular audits, and have to meet hundreds of continuously updated performance and transparency standards. 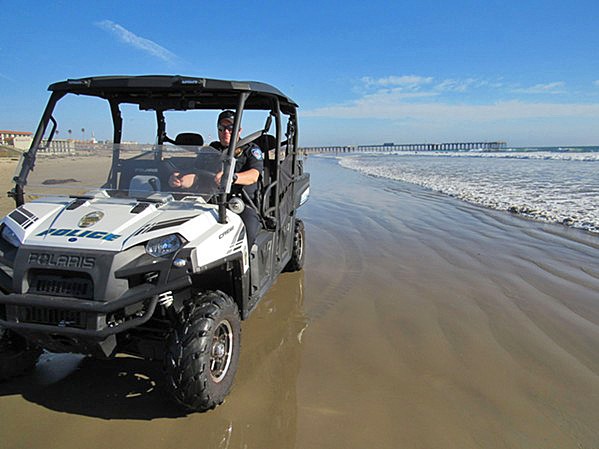 The Pismo Beach Police Department is the only agency in the county accredited by CALEA, and city staff say that's made it one of the most accessible and community-focused law enforcement agencies in the region. But those hoping to see criminal justice reform and an end to systemic racism say there's still a long way to go locally, even in Pismo Beach.

"I think what it's done is we're in a constant state of evolution and reform," Pismo Beach Police Chief Jake Miller told New Times. "Every year we're taking hard looks at ourselves. ... It doesn't mean that we're always going to play a perfect game, but I think it demonstrates our dedication to perfect effort."

The Pismo Beach Police Department has been continually working on its CALEA accreditation since about 2003, Miller said, when the then police chief heard about the organization at a conference. He was looking for a way to ensure that his department was doing the best it could, and he decided a CALEA accreditation was the "stamp of good housekeeping" Pismo Beach needed.

In 2004, Miller said the department signed on with CALEA and started its self-assessment, a three-year process that included going through all Pismo Beach Police policies and procedures and bringing them up to CALEA's standards. There were a little more than 400 such standards to meet then—each with their own set of more specific sub-standards to be met—and now there are more than 500, Miller said.

CALEA's standards of policing guide the Pismo Police Department in everything it does—from how its vehicles are inspected to when officers should use deadly force and how to report it.

And the standards are always changing. CALEA's review committee cycles through the organization's standards, and makes adjustments wherever needed. When that happens, Miller said the Pismo Beach Police Department sometimes has to tear down a policy and rebuild and relearn, and it's worth it to stay up to do date.

But meeting the agency's standards is not just about policy, Miller said, it's about proving that the policies are actually being followed, and showing that to an independent third party. Each year, CALEA examines a random 25 to 35 percent of Pismo's standards and ensures that the department is compliant.

Every four years, including this year, the Pismo Police Department has to go through a more comprehensive review process to renew its accreditation, which includes a days-long site visit, assessment, and an appearance before the commission.

"It's more 'practice what you preach and prove it,'" Miller said.

The accreditation process is totally voluntary, and Miller said most agencies that choose not to go through all the steps blame the costs—in both money and time. Pismo Beach spends about $25,000 extra a year in inspection fees and other costs to stay in compliance with CALEA. That's not including difficult-to-calculate staff costs, and it can take a lot of additional staff time to meet some of CALEA's standards.

"But for us, having that third-party stamp of good housekeeping that says, 'Yep, you do it,'" Miller said, "that's it for us."

However, some community members say police brutality and racism won't end until the policies and behaviors police adhere to change dramatically.

Barry Price has long worked on issues of criminal justice reform with Bend the Arc SLO, a national organization focused on dismantling racial and social injustices in the U.S. through policy change. Recently, much of Price's work has revolved around an analysis of local police policies, particularly when it comes to use of force.

"The main finding is that many of these law enforcement agencies are just uncritically adopting these policies that they're purchasing from Lexipol," Price said.

Lexipol is an organization that develops comprehensive and continuously updated, prewritten policies that law enforcement and other public safety agencies can purchase, download, and adopt. And that's what most law enforcement agencies in SLO County have done, Price said.

"But it's unwise to adopt these policies uncritically because Lexipol is biased," Price said.

So while Price said it's great that Pismo Beach is holding itself accountable and following its policies, none of that really matters if the policies themselves are problematic. While Pismo Beach Police Chief Miller confirmed that his department does purchase its policies from Lexipol, he said the policies are reviewed and customized to be compliant with CALEA.

Price agreed that tailoring Lexipol policies can be a great route for smaller agencies with fewer resources, but he said Pismo's policies look pretty much like the same boilerplate guidelines most other agencies in SLO County use, even where it counts most.

Although Pismo's guidelines surrounding carotid control holds are detailed and restricted to fairly specific instances, the department hasn't banned chokeholds altogether as so many social justice organizations, including R.A.C.E. Matters SLO, are demanding.

That and a ban on shooting at moving vehicles are two of the eight law enforcement policy changes recommended in the national 8 Can't Wait campaign, which was launched after the May 25 death of George Floyd at the hands of Minneapolis police. While Pismo's policies clearly state that using a firearm to disable a moving vehicle is not effective, it can be done if "circumstances dictate that such use reasonably appears necessary to protect life."

That's not surprising to Price. He's had a number of extensive conversations with law enforcement regarding their policies. He's watched the law enforcement presentations to the various city councils throughout the county regarding the 8 Can't Wait campaign and the demands outlined by R.A.C.E. Matters SLO. He's heard the responses from city and law enforcement leaders.

"And my personal view," he said, "is that it doesn't appear that there will be much change in the status quo from any of these departments as a result of the 8 Can't Wait principles." Δ