Glen Like All the President's Men (1976), The Paper (1994), and the documentary Page One (2011), The Post celebrates the Fourth Estate, reminding viewers that—as Justice Hugo Black said—"The press was to serve the governed, not the governors." In addition to being a story about the importance of journalism, it's also a story of the burgeoning feminist movement and one woman's struggle to keep her family paper afloat. It's the early '70s and Nixon is president; his actual tapes are used in the film, lending an important element of realism. Kay works in a man's world. She's frequently the only woman in a room full of men, and though they know she's the boss, she's second guessed and pandered to. Her sphere of influence reaches a fevered pitch when her paper feels like it's playing catch-up to The New York Times, which is publishing the so-called Pentagon Papers, documents that chronicle an ongoing government cover-up about the Vietnam War. When the Justice Department brings a court injunction against The New York Times, threatening criminal charges if they continue to publish, The Washington Post gets a shot at continuing to tell truth to power when investigative journalist Ben Bagdikian gets ahold of Daniel Ellsberg's papers. Kay knows if she publishes, The Washington Post may fall to criminal charges. Meanwhile, Kay is also overseeing the first stock market public offering of The Washington Post to generate a much-needed cash injection into the newspaper, but a clause in the bankers' contract allows them to pull out. With Ben Bradlee on one side telling her to publish and Arthur Parsons on the other, Kay must decide whether to honor the meaning of a newspaper, risk it all, and publish, or play it safe. It's a gripping political thriller and reminder that the free press is a check and balance on government power.

Anna Adding to Kay's reticent feelings about publishing is the fact that many involved parties are personal friends of her and her late husband Phil—people she has wined and dined with, raised children with, and who are embedded in the socialite lifestyle she's known her entire life. Yet the paper, her father's legacy that became her husband's, is just as important to her as any person. Being the only woman in the room is both intimidating and infuriating, and Streep plays the internal conflict of both wanting to be heard and actually finding her voice with her well-seasoned panache. We see Kay confidently arguing her well-read and researched thoughts on the company being traded publicly behind closed doors, yet when faced with the sea of men sitting on the board, she folds in on herself, unable to speak. Her reserved and quiet demeanor is at odds with Executive Editor Ben Bradlee, whose bullish and bold style demands action over consequence, and who has little patience for indecision. First and foremost for Ben Bradlee and his fellow journalists is the fight to protect freedom of speech, and refusing to protect a government who has continuously lied to the public over decades and sent boys into an unwinnable war. 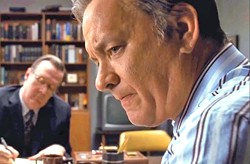 Glen The film's definitely a collaboration between Hollywood's A-Team. Spielberg, Streep, and Hanks! It's like the holy trinity! The story also tees-up All the President's Men, which you'll recall covered the Watergate break-in as revealed by Washington Post reporters Bob Woodward and Carl Bernstein under Editor Ben Bradlee—reportage that brought down the Nixon presidency. Spielberg is a superlative director, not as showy as some, but great at building tension in the small moments and letting his actors carry the weight of scenes, and what amazing actors! Streep is a revelation, displaying Kay's internal struggle with the lightest of expressions, yet we know exactly what she's going through. Hanks plays Bradlee with the brash confidence of someone more committed to journalistic integrity than with keeping his job. The supporting cast is equal to the principals' performance. Odenkirk is especially good, and Greenwood disappears into the role of McNamara, a morally compromised man torn apart by his collusion. To get more insight into his character, I highly recommend the Errol Morris documentary The Fog of War: Eleven Lessons from the Life of Robert S. McNamara (2003), in which the former U.S. secretary of defense recalls the foibles of Vietnam. As far as The Post is concerned, I see Oscar nominations on the horizon. This is great filmmaking!

Anna Awards season is around the corner, and The Post is definitely going to be a contender in many categories. Spielberg weaves an engrossing, high stakes look at this slice of American history, and the cast has everything to do with it. I also was particularly drawn in by Whitford as Arthur Parsons, a member of the newspaper's board who thinks things should stay as they were when Phil Graham ran the company and who inherently mistrusts decisions made by women, even when they're the controlling owner. His character is utterly frustrating, and watching Streep dress him down in the end was completely satisfying. Kay is a woman of two worlds—one where she must grapple in a world of men and business, and one where she hosts dinners and retires to the lounge with the ladies while their husbands smoke cigars and talk politics and finance. When the decision to publish comes down to the wire, she's bold enough to side against her most trusted advisors and go ahead with the story, even with the threat of court cases and prison looming unknown. It's pretty much a given that if you put Spielberg, Hanks, and Streep together on a project it's going to be great, and The Post doesn't disappoint. See it now so you know what you're cheering for when it inevitably takes home some Oscars. Δ