The power of one

Diane Wilson seems an unlikely candidate for an activist. As a kid in the Texas Gulf Coast community of Seadrift, she crawled under the bed to avoid talking to people. But her love for the sea changed all that, and now she travels the country, speaking out about the importance of taking action. 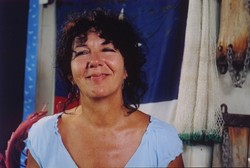 # A fourth-generation shrimp fisherman, Wilson began fishing the bays of the Texas Gulf at the age of 8, and by age 24 she was the first woman shrimp boat captain in her community. The solitude of the long hours on the water suited her just fine as she eked out a living.

But after the shrimping grew worse, she tied up her boat and ran a fish house in town. Then, in 1989, someone brought in a newspaper article about the first national inventory of toxic emissions that identified her native Calhoun County as No. 1 for toxics in the country, and she started to think that the health of her beloved bay might be threatened by all the petrochemical plants along the shoreline. She vowed to do something.

"One person can make a difference. I absolutely believe we are all very powerful, and we've lost faith in our ability," she said in a phone interview between speaking engagements in Texas.

She started her fight by calling a meeting in her community to talk about the chemical plants, and began writing letters, circulating petitions, making phone calls, and learning as much as she could about waste discharges. She focused on actions she could take alone, such as hunger strikes and civil disobedience.

Wilson tells the remarkable story of her successful campaign to stop toxic discharges from a plastics factory in her book, An Unreasonable Woman: A True Story of Shrimpers, Politicos, Polluters, and the Fight for Seadrift, Texas.

She was invited to join a workshop on "unreasonable women of the Earth" at a Bioneers conference in the Bay Area a few years ago, where the women's peace group CodePink was formed.

"I'm typically a loner, a lone coyote, so it was real different for me to have a large group of women supporting me. Men control things a lot down here. It was hard for me to be with people so much, but it's made for growth in a different part of myself. Sometimes the emotional steps you take are more courageous than the physical ones," Wilson said.

CodePink is a powerful grassroots group that empowers women at the local level, she noted.

"You put on pink, and it's like a Superwoman cape," she said. "You just become it. You step out and do things you never did before."

Documentary filmmaker David Weisman of Morro Bay met Wilson in 2003 when he filmed a 40-minute interview with her for the Texas Legacy oral history project.

"I was enthralled. There's not one molecule in her that isn't vibrating at a thousand RPMs. She just says, 'You don't sit around and talk, you don't blog, you just do it,'" Weisman said.

He invited Wilson to SLO County a couple of years ago, and she's due to come back to give a talk at the SLO Library on Earth Day, April 22, as a fundraiser for Weisman's group, the Alliance for Nuclear Responsibility, which is fighting against relicensing nuclear power plants in California.

"For anyone who feels down, or feels that political obstacles can't be overcome, Diane Wilson is living proof of what a difference one person can make. She's absolutely down-to-earth. She's just like you and me, but she does these superhuman things," Weisman said.

Wilson said she's looking forward to revisiting SLO County: "I've been up to y'all's little neck of the woods, and that place was the most outpouring and gracious. They took me to a little Irish bar. It's a real good group."

Summing up her activist philosophy, Wilson noted, "Life is not a spectator sport."

INFOBOX: Inspiration for activists
Diane Wilson speaks at the SLO City-County Library on Palm Street on Earth Day, April 22, from 4 to 5:30 p.m. as a fundraiser for the Alliance for Nuclear Responsibility. The suggested donation is $20, or $5 for students with I.D. A private reception is set to follow, with a suggested donation of $40. Reservations: 772-7077.