The president's budget is irresponsible 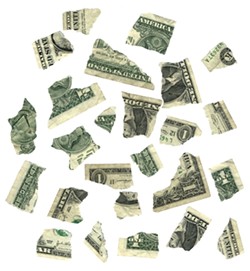 President Barack Obama’s budget proposal is a major disappointment. It does not deal seriously with massive deficit spending, and in fact proposes another $7 trillion in deficit spending over the life of the budget. It does nothing to address the looming entitlement train wreck. The underlying assumptions regarding economic growth, interest rates, and revenues are wildly optimistic, and the budget proposal cynically ignores interest payments on our existing debt. Even such left-leaning newspapers as the San Francisco Chronicle panned the proposal.

President Obama had a golden opportunity to lead, and he punted.  These are serious times, and this was an unserious proposal that reflects very poorly upon the president. Not only is it disappointing, it is profoundly irresponsible to propose something that is so clearly out of line with our financial reality. We simply cannot continue spending money like we have been of late. In three years (FY09-11), our country will rack up about $4.5 trillion in new debt, according to the Heritage Foundation. For context on the incredible level of spending this represents, consider that World War II cost our country less than that in constant dollars. We fought and won the largest war in history, funded the British and Russians and supplied them with massive amounts of war material, had many millions of our own people in uniform, saved the planet for democracy, and spent about $4 trillion in 2009 dollars over about four years.

What exactly have we achieved for this three-year $4.5 trillion in new debt? This year, our federal budget deficit will reach $1.6 trillion.  That is about $5,000 per person in deficit spending this year alone. Since the 1960s, federal government spending per household has tripled in constant dollar terms to more than $30,000, according to the Heritage Foundation. Does anyone believe that our government is three times as good or have our services improved by a factor of three?

Nearly 40 cents of every dollar we are spending now is borrowed money. Government spending has grown at a rate eight times faster than median household income over the last 40 years, according to the Heritage Foundation. We have unfunded liabilities for the entitlement programs of Social Security, Medicare, and Medicaid that dwarf our official debt and Gross Domestic Product (GDP). Government spending is 25 percent of GDP, much higher than our historical tax revenues of only 18 percent of GDP. Interest payments alone on our debt are projected to reach about $1 trillion per year by 2020, significantly higher than the entire Department of Defense budget. This level of spending is irresponsible, unsustainable and ultimately destructive. Our national debt now is approaching our GDP, a historical point of decline.

History has shown us the primary reason that countries collapse or have revolutions is debt, in my opinion. A 90 percent debt-to-GDP ratio is the level at which countries that fail begin their decline. When Greece collapsed last year, their debt-to-GDP ratio was about 115 percent. We are not far behind. Continuing to run trillion-dollar deficits year after year will hasten our demise. Unfortunately, the budget the president submitted does just that. This continued irresponsible spending would irreparably damage our country and guarantee future generations a greatly reduced standard of living.

It is simply immoral to burden future generations with a crushing debt they had no hand in creating. Equally disappointing, though hardly surprising, were the comments from our own Rep. Lois Capps. She is quoted as saying the President’s budget takes the necessary steps to “put our fiscal house in order.” On what planet? How on this Earth does a budget that proposes $7 trillion in new deficits put our fiscal house in order? Then she is quoted as saying that the president’s roadmap makes tough choices and connects American homes to 21st century technologies and speeds up America’s transition to a cleaner, safer energy future. What? This is all meaningless pabulum that we clearly can’t afford, whatever it means. Unfortunately, this is the kind of fuzzy and misguided thinking we have come to expect from Mrs. Capps and one of the reasons we find ourselves in this precarious fiscal situation.

Fortunately, most Americans seem to have awakened to the dangers this absurd runaway spending are posing to our country. The election of 2010 was a primal cry from across the country to stop the spending and reign in government. The president and Rep. Capps apparently didn’t get the message. It is time to get serious about this out-of-control spending before it destroys our country. The president needs to get serious and lead, and Rep. Capps might consider an accounting course. Our country can no longer afford this reckless, irresponsible, and, frankly, mindless fiscal policy to continue. Our children deserve better.

Businessman Tom Watson was the Republican candidate for the 23rd Congressional district in California in the 2010 election. Contact him via the opinion editor at econnolly@newtimesslo.com.